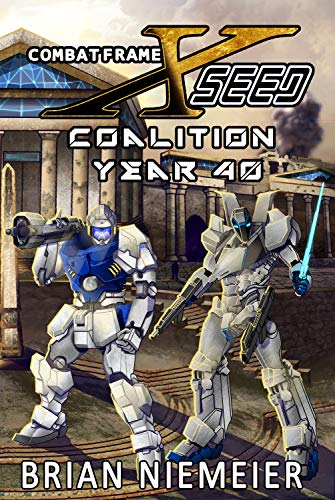 “I will enjoy speaking with the architect of HALO’s success.”

Before the asteroid drops, combat frame battles, betrayals, and ultimate victory of the Systems Overterrestrial Coalition (SOC)–described in the first Combat Frame Xseed novel and the Coalition Year 2 (CY 2) short story–Senzan Kaimura discovered something in the Martian ruins. When he used this secret to turn Elizabeth Friedlander into the self-proclaimed Goddess of the World, Sekaino Megami, he birthed a monster that terrorized humanity–a monster that lived on past Megami’s death. As new intrigues threaten another SOC-launched cleansing of Earth, the Human Liberation Organization strives to free Earth from SOC control.

How can you fight a monster, but by creating one of your own?

The Brussels HLO cell, led by Tom “Arthur Wake” Dormio, is an unusually effective cell, costing the local SOC governor nearly 50 officials and ten million credits in damage. During one of their raids, they receive a strange message which leads them to a mysterious benefactor–and four of the most powerful combat frames ever. Equipped with these series 100 XSeeds and aimed at both the SOCs and Megami’s monster, these partisans rampage against the SOC forces, easily taking down all opposition by their oppressors. But a growing unease builds among the XSeed pilots, as Arthur Wake might just be a monster as well.

Like with Brian Niemeier’s Soul Cycle and the previous XSeed, a simple summary is not enough to capture the twists, shifting intrigues, and stunning revelations in Combat Frame XSeed: Coalition Year 40. But where CY 1‘s plot explored shifting loyalties between two stark moral poles, CY 40 is a grayer martial thriller. While the nationalist Earthers are portrayed as the sympathetic side in the XSeed saga, their methods in CY 40 are no longer as pure as they once were, dealing out atrocities just as severe as the ones inflicted on their people in the past. Black-hearted monsters fight with the good guys, while honorable opponents fight for the no less evil SOC, just as the SOC’s paternalism for their conquered peoples is exchanged in hopes of a more final solution to the Earther problem. Yet Niemeier does not dip into the cesspool of grimdark nor the bloody thrill of atrocity. Revenge is a powerful motivator, and hot-blooded lapses of judgement return to haunt both HLO partisan and SOC alike.

Perhaps the most sympathetic characters are Simon Trent and Malov Strauss. Trent is a young student whose aptitude for programming lands him a front seat (in an XSeed, no less) to the real costs of driving the invader out of Earth, an innocent behind a gun. Trentt’s struggle is how to remain good in wicked times. Malov, however, is a hound of justice, consistently snapping at the heels of the HLO. Sneered at by his bosses as a Cassandra, Malov’s uncanny abilities exposes him to Arthur Wake’s cruelties, which push him firmly and understandably into Megami’s monster’s camp.

While I raved about the original XSeed (CY 1) and its side story (CY 2), it is refreshing to see CY 40 offer new scenarios and new types of action and intrigue, instead of rehashing the successful CY 1. The underlying 60 million year-old mystery begins to be fleshed out in ways that make speculation even wilder. Like all of Niemeier’s stories, careful reading is rewarded. However, it is so easy to be swept up in the breakneck pace of the action. Perhaps rereading might be more appropriate and fun.

CY 40 ends with another of the grand space battle set pieces common to Niemeier’s fiction, mixed with new revelations and one heck of a desperate gamble by the Adele Mundy of HLO. Fortunately, more XSeed is on its way,, so we won’t have to wait long to see what happens next.