Short Reviews – Priestess of the Flame, by Sewell Peaslee Wright

Priestess of the Flame by Sewell Peaslee Wright appeared in the June 1932 issue of Astounding Stories. A scanned version can be found here.

I have been rather amused by the protests which have come to me regarding the “disparaging” comments I have made, in previous tales of the Special Patrol Service, regarding women. The rather surprising thing about it is that the larger proportion of these have come from men. Young men, of course.

Now, as a matter of fact, a careful search has failed to reveal to me any very uncomplimentary remarks. I have suggested, I believe, that women have, in my experience, shown a sad lack of ability to understand mechanical contrivances. Perhaps I have pictured some few of them as frivolous and shallow. If I have been unfair, I wish now to make humble apology.

Aha! Here it is! Finally, after dozens of stories and several issues, a story to showcase and highlight just how sexist and misogynistic the pulps were!

On the alien world of Lakos, a dangerous cult threatens the universe’s supply of unobtanium (“temite”) which can only be mined in sufficient quantities by the native population. At its head is an incredibly beautiful, incredibly powerful and incredibly evil woman: Liane, Chief Priestess of the Flame, Mother of Life, Giver of Death.

The Supreme Space Council was able to get her temporarily out of the way by taking her offworld as ‘political guest’ in an attempt to buy time to resolve the situation on Lakos, but she manages to stow away on Captain John Hanson’s ship, the Etrak, which was sent to assist council forces on the mining world.

Liane’s plan is to hold the unobtanium supply ransom in exchange for the unthinkable: becoming the first woman on the Supreme Council of the Universe!

What follows is a fun little planetary romance romp, including a seduced second officer, that would’ve made for the basis of an B+ episode of the original Star Trek. The story itself could’ve been better written and needed some serious editorial attention, but it’s not bad for a gender think-piece from 1932. Wait, did I just say “gender think-piece”?

While a contemporary social justice-steeped reading of this story would have difficulty looking past the captain’s opening remarks, the sexism of an all-male Supreme Council of the Universe, the racism of the humans against the Lakonians, and the wariness with which the older male members of the crew view a beautiful woman dropped in the midst of their junior officers, what Wright gives us is actually an interesting look at female/feminine power through the eyes of a potentially unreliable and jaded narrator who himself is a reflection of ‘older’ social views that were shifting in the wake of the women’s civil rights movement and women’s ascendancy as a direct influence on politics.

Liane is a bit power obsessed, though she is certainly not afraid to admit it. She rose to power as the daughter of the last high priest who had no sons; she consolidated power and became the most powerful cult leader her people had known. Humanity had not previously had issues with the people of Lakos, because they were generally seen as weak and docile – under Liane’s leadership, they had strength and confidence to gain leverage against the exploitation of their world’s resources. Her people would fight and die for her. Her power, however, is feminine – she is a mother goddess to her people, and to the outsiders, she is an exotic beauty to manipulate men into aiding her. She puts on different airs among the different groups (a change that is shocking to the starship captain when he sees her in full-on evil flame goddess mode).

“We are here,” I said sternly, “representing, through our Service, the Supreme Council of the universe. What word shall we take back to those who sent us?”

Liane smile, a slow, cruel smile. The pink fingers of one hand tapped gently on the carven arm of her throne. The eyes of the semicircle of old men watched us with unwavering hatred.

“The word you carry will be a good word,” she said slowly. “Liane has decided to be gracious-and yet it is well that you have full understanding of Liane’s power. For while the word Liane shall give you to bear back is a good word, still, Liane is but a woman, and women have been known to change their minds. Is that not so, Commander Hanson?”

She then goes on to make a show of power by throwing people who plotted against her one by one into jets of fire. Worth noting that Liane only refers to herself in third person while assuming her goddess role. 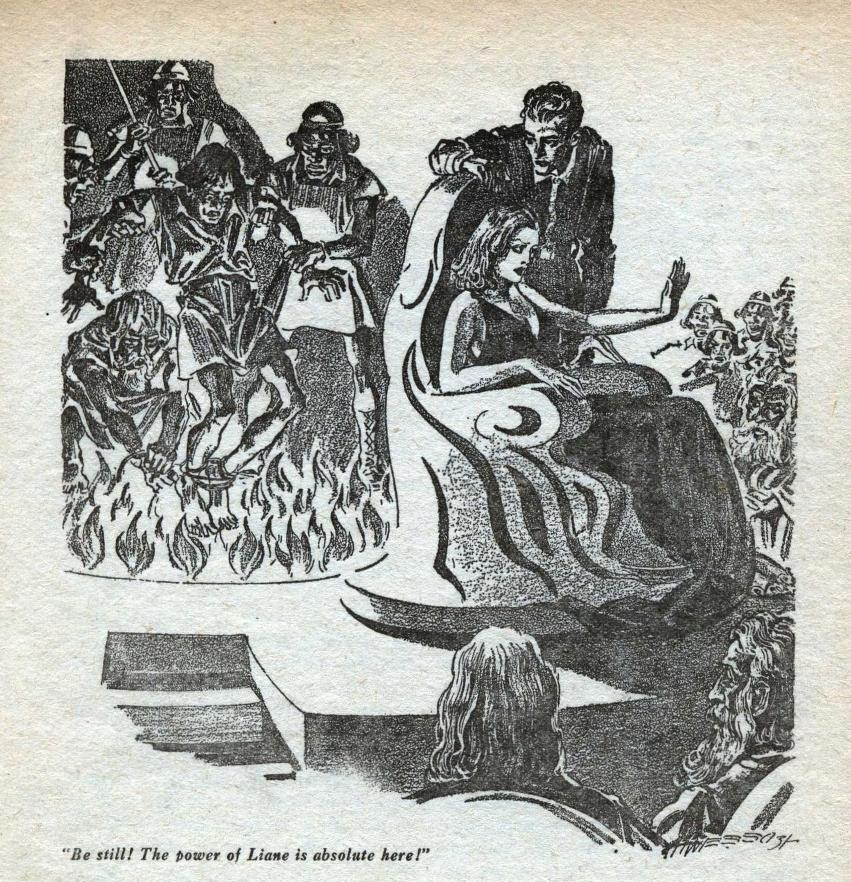 And while she does tread a wicked path, the femininity that she jokes leads her kind to inconstance leads her also to a moving redemptive moment not as a power hungry despot but as a woman who would protect fight to protect someone she loved.
The ultimate bit of brilliance comes in the Captain’s denouement:

“There are many kinds of women: great women, and women with small souls; women filled with the spirit of sacrifice; selfish women, good women and bad.

And Liane? I leave her for you to judge. She was a woman; classify her for yourself.

After all, I am an old man, and perhaps I have forgotten the ways of women. I do not wish to judge, on one hand to be called bitter and hard, on the other hand to be condemned as soft with advancing age.

I have give you the story of Liane, Chief Priestess of the Flame.

How, you clever and infallible members of this present generation, do you judge her?