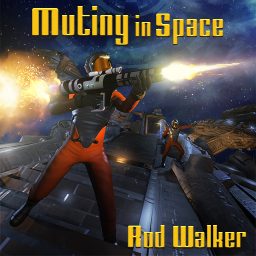 If you’re one of the many science fiction fans who laments the collapse of the genre into a dystopian swamp of sexual deviancy and social justice, you will rejoice to read the Neo-Heinleinesque work of Rod Walker, whose MUTINY IN SPACE is now available in audiobook+ at the Arkhaven store for only $9.99.

When the radical revolutionaries of the Social Party prevent his attendance at university and make his life on New Chicago impossible, Nikolai Rovio has no choice but to accept his starship-bound uncle’s offer to take refuge in space and sign on as a technical apprentice with Starways. But space, he quickly learns, is full of dangers that can kill a young man just as dead as even the most bloodthirsty revolutionary.

And no place that Man can travel can ever truly serve as a safe refuge from ambitious and evil-minded men.

MUTINY IN SPACE marks a first step in the return of science fiction to its classical form and historical heights. Written in the style and tradition of Robert Heinlein’s 12 classic juvenile novels published by Scribner, MUTINY IN SPACE is an exciting tale of space, technology, courage, independence, and the indomitable spirit of Man. 5 hours, 8 minutes. 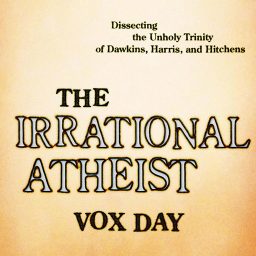 On one side of the argument is a collection of godless academics with doctorates from the finest universities in England, France, and the United States. On the other is THE IRRATIONAL ATHEIST author Vox Day, armed with nothing more than historical and statistical facts.

Day strips away the pseudo-scientific pretensions of New Atheism with his intelligent application of logic, history, military science, political economy, and well-documented research. The arguments of Richard Dawkins, Sam Harris, Christopher Hitchens, Daniel Dennett, and Michel Onfray are all methodically exposed and discredited as Day provides extensive evidence proving, among other things, that:

– More than 93 percent of all the wars in human history had no relation to religion
– The Spanish Inquisition had no jurisdiction over professing Jews, Muslims, or atheists, and executed fewer people on an annual basis than the state of Texas
– Atheists are almost four times more likely to be imprisoned than Christians
– “Red” state crime is primarily in “blue” counties
– Contra Richard Dawkins, sexually abused girls are 55 times more likely to commit suicide than girls raised Catholic
– In the twentieth century, atheistic regimes killed three times more people in peacetime than those killed in all the wars and individual crimes combined.

THE IRRATIONAL ATHEIST provides the rational thinker with empirical proof that atheism’s claims against religion are unfounded in logic, fact, and science. Now available at Arkhaven for $14.99 in DRM-free MP4 format, TIA clocks in at 9 hours and 51 minutes and is narrated by Jon Mollison.