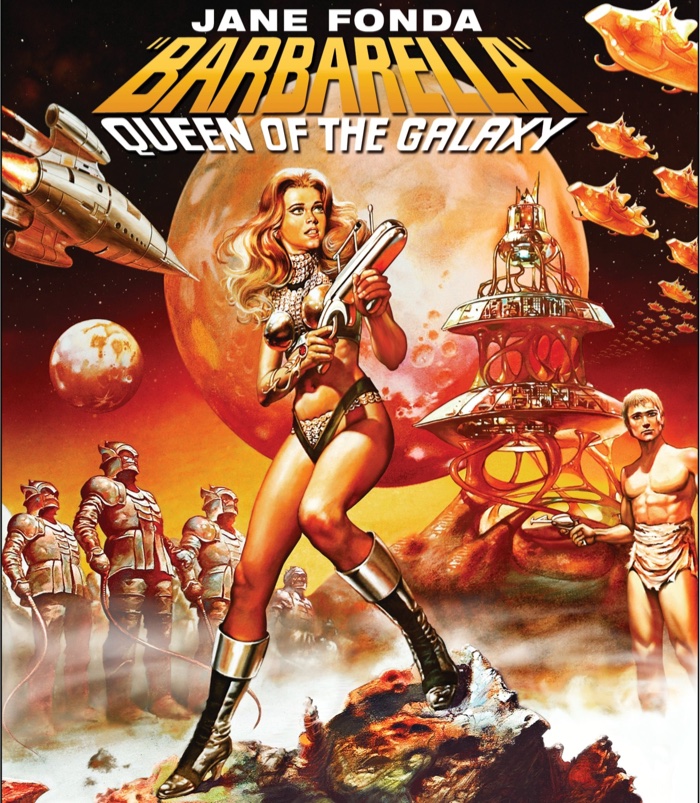 The late 60s, when Hanoi Jane was one of the sexiest women in the world, and not just a vile leftist betraying American troops.

People have strange ideas about the history of science fiction in film.  Some years ago, a Canadian video games programmer and designer in his early 40s, no fool, sagely explained to me that 2001: A Space Odyssey (1968) completely changed everything about the genre, and that before then, silly movies like Barbarella were all audiences had to watch.  A fascinating theory!  There are just a few problems;

This isn’t even considering that if you forced me to watch one, I would choose the psychedelic sex comedy in space over Kubrick’s pretentious, ruthlessly boring adaptation of Clarke’s novel.  Now, I don’t consider myself an expert on science fiction in film, and one can write an entire book, let alone a column, about its evolution through the decades. However, I’ve seen enough older pictures to have a perspective, and unlike most cinephiles, enjoy reading, too.

The first “science fiction” movie is widely considered to be George Melies’ A Trip to the Moon (1902).  You can watch it for yourself here. Mythologizing and breathless praise from film snobs about what a pioneering masterpiece it is and how awesome Melies was blah blah…the movie is crap.  It’s shoddy, nonsensical, and dull, with the moon offering a setting for a junior high drama performance. Even its age doesn’t entirely excuse it, since The Great Train Robbery (1903), released only a year later, is light-years ahead of it.  The first Western has a coherent plot, even utilizing a three act structure, action and excitement throughout, and and even a cool closing image, reminiscent of bonus scenes in credits today. 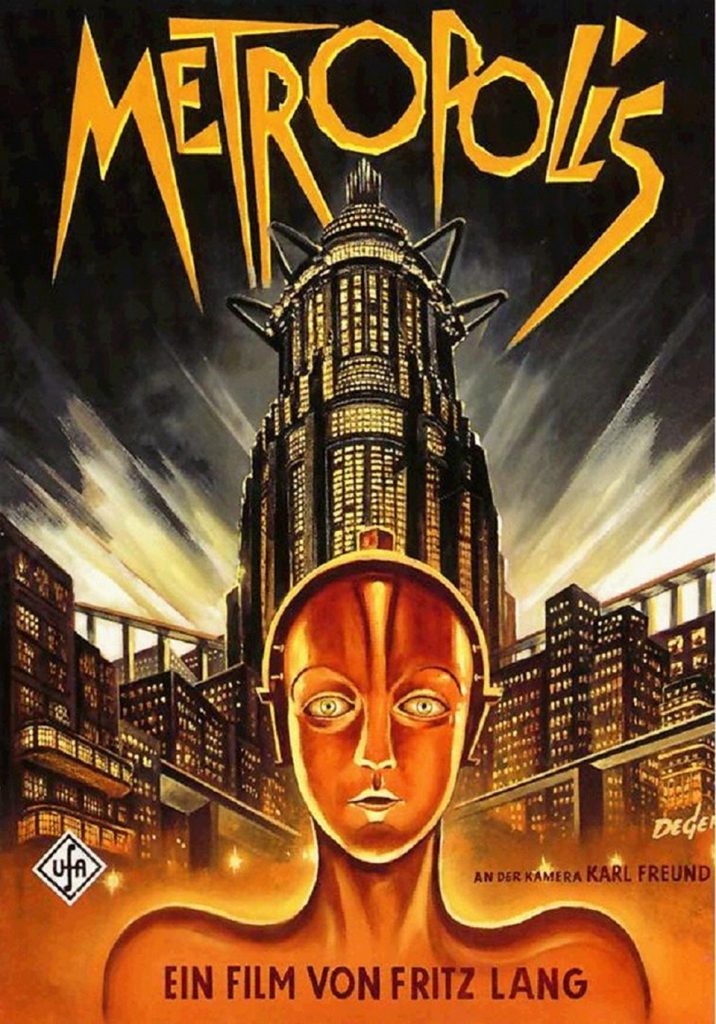 In those early silent years, there was plenty of experimentation with various genres and approaches, but surprisingly little to do with science fiction.  In fact, it’s fair to say that the next major science fiction movie was Fritz Lang’s iconic Metropolis (1927) a quarter century later. It’s impossible not to respect its scope and ambition, a tremendously expensive picture (the equivalent of over $200 million today) in an era where most movies were made relatively cheap and quick.  Or the genius of Lang, truly one of the earliest and greatest masters of cinema.  Still, it doesn’t hold up by modern standards.  The story is simplistic and cliched.  And it’s ironic that the same people thumbing their noses at the pulps regard Metropolis as an all-time, enduring classic.  Virtually any pulp story from 1927 would have been vastly more complex, exciting, and unexpected than the script for Metropolis.

(And on a tangential note, it’s unfortunate that there appears to be an inverse relationship between the quality of Lang’s work and its popularity.  For instance, how many more people have heard and seen of Metropolis versus Scarlet Street (1945), one of the best movies of the entire 40’s, and perhaps one of the best 5-10 pictures ever made up until then?)

While I haven’t watched all of them, after this it appears that science fiction, from the 30s to the 50s, became closely linked with either monsters or aliens of some kind.  Often both.  The original versions of The Day The Earth Stood Still (1951), Invasion of the Body Snatchers (1956), and the original Vincent Price version of The Fly (1958) all come to mind.  A few of these pictures were good, some were mediocre, and most were forgettable trash whose only possible redeeming quality was being featured on Mystery Science Theater 3000.  However, even the quality ones weren’t much in terms of science fiction.  For instance, the aforementioned Body Snatchers is essentially a noir thriller, even if the framing device is an alien invasion.

So what was the earliest science fiction movie I watched that I considered truly great, and a fine example of that genre? I’ve already shared how unimpressed I was by Kubrick’s 2001.  And yet, it was that same fateful year, 1968, that saw the release of a truly fantastic film, Planet of the Apes (1968).

It’s easy to overlook or dismiss, on account of how over-referenced and parodied to death it is, and how everyone knows the ending.  Or the inevitably silly, unnecessary cash grab sequels that followed.

So when I actually sat down and watched the original, I was taken aback at what a serious, insightful, tragic, and disturbing science fiction movie it was.  Taylor, played with unabashed verve by Charlton Heston, is a devil-may-care, cynical protagonist in the mold of Sabatini’s Scaramouche.  Landon is the more straight-laced astronaut, who upbraids Taylor for his attitude.  And yet, Taylor is not heartless, and the tragedies that befall the space mission, whether the horrible death by mummification of Stewart, or the lobotomy of Landon by the apes, resulting in him becoming a drooling retard, affect him deeply.  Through it all, Taylor never gives in to despondency and continues defying his seemingly certain doom, all in the tradition of a worthy pulp hero.  Reinforcing this looming dread is a constant eerie, unsettling vibe, first keenly felt when the astronauts are crossing the desert. 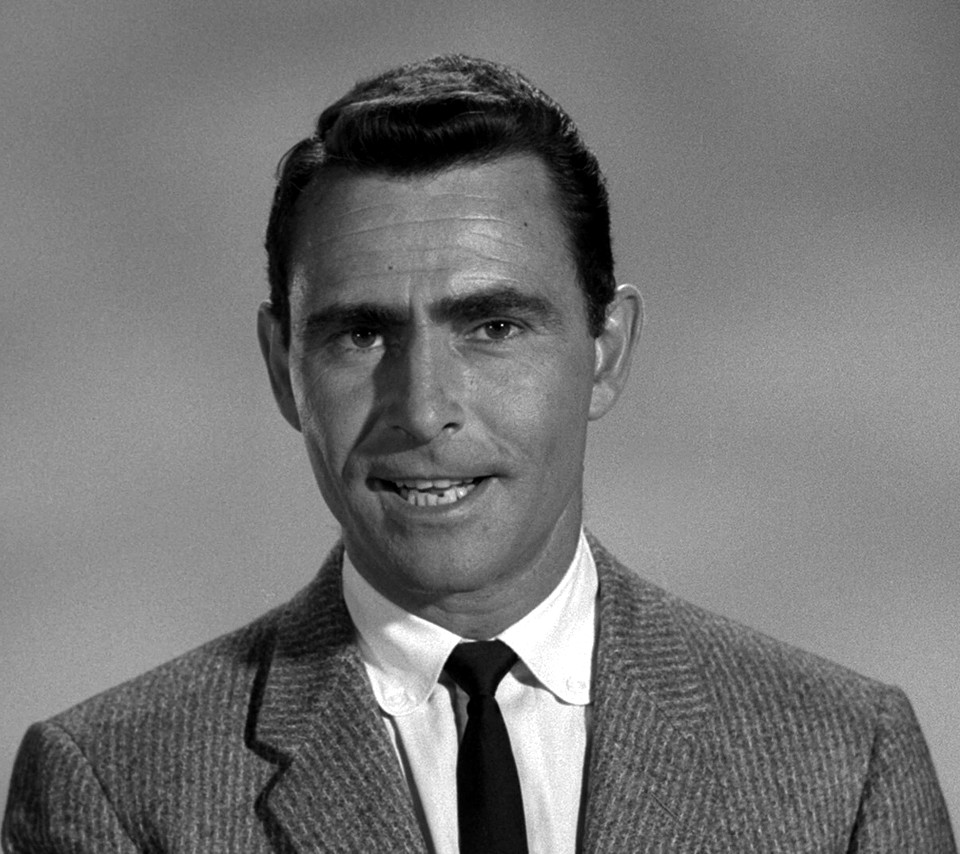 A man responsible for much of the quality science fiction on large and small screens in the 50s and 60s.

And the civilization of the apes themselves is well-constructed, logical, and reasonably complex.  There is a caste system and apes contending against one another.  Importantly, they are a series of individuals, as opposed to a mindless collective all behaving in lockstep.  (A common problem in movies depicting alien societies nowadays)  It’s masterful stuff, blending action, suspense, and mystery, complete with archaeological detective work, in a genuine science fiction story.

Of course, much of the credit for the success has to go to the original screenwriter, the brilliant Rod Serling.  In fact, the whole movie plays out like a very long, very good episode of The Twilight Zone.  While a TV series instead of a movie, its effect on science fiction in the moving pictures can’t be understated.

So now I ask the readers; what is the earliest great science fiction picture for you?  Was it the aforementioned 2001, a much earlier movie, or….Barbarella?

Tags:2001: A Space Odyssey, Barbarella, Metropolis, Planet of the Apes, The Twilight Zone