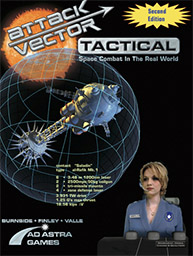 Take command of a fusion-propelled spaceship, using the most scientifically accurate model of Space Combat ever put into a game, all with clever play aids and mechanics that hide the math so you can focus on maneuver, timing and resource management! Fuel fractions with the calculus pre-done for you, declining mass fractions, an easy to manage thermodynamic system, and fully realized and articulated movement in 3D!