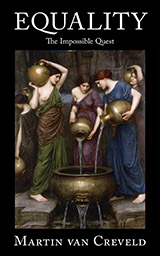 Despite being one of the most important political concepts of the modern age, unlike Justice and Liberty, Equality has seldom been examined from an intellectual perspective. What does it mean to be equal? What is being specifically demanded when calls for equality are made? Is inequality justified when the objective is to make up for past inequalities? Which inequalities are unacceptable and require government intervention, and which are acceptable and therefore do not merit any action? Where did the idea that equality was a desirable state come from in the first place? These, and other questions, are addressed in deeply researched detail by Martin van Creveld, the well-known military historian and theorist, in Equality: The Impossible Quest.

Van Creveld begins his study with the animal kingdom, noting the general absence of any form of equality between or among the various animal species. He then turns his attention to Man’s earliest and crudest societies, then examines the historically significant cultures of Greece and Rome before proceeding to survey both religions and philosophies for their various contributions to the concept. He looks at historical attempts to impose equality, both successful and unsuccessful, and finally examines the various aspects of the struggle for equality in its modern forms, from race, sex, and income to weight, physical appearance, and sexual orientation. Both his natural sympathies and subsequent conclusions may come as surprises to the reader, but throughout, van Creveld’s attention to detail and rigorous intellectual honesty shine an informative and long-overdue light on a very important subject.

Dr. Martin van Creveld, Professor Emeritus of the Hebrew University, Jerusalem, is one of the world’s leading writers on military history and strategy, with a special interest in the future of war. He is fluent in Hebrew, German, Dutch, and English, and has authored more than twenty books, including Fighting Power: German and U.S. Army Performance, 1939-1945 (1982), The Transformation of War (1991), and Wargames: From Gladiators to Gigabytes (2013). He is known for his development of the concept of “nontrinitarian” warfare and two of his books are considered to be canonical in the development of 4th Generation War.