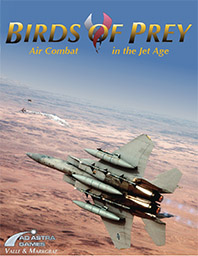 Air combat in the Jet Age!

Birds of Prey: Air Combat in the Jet Age is a revolutionary jet combat game simulating flight with unprecedented precision and engrossing play. Flight mechanics allow freedom in three dimensions without requiring special maneuver rules. Physics-based systems model aircraft performance differences correctly and simply through the use of only two elegant playaids; graphical computers known as nomograms. Missiles fly out towards their targets without player intervention, using proper kinematics from launch and flowing seamlessly into the underlying flight engine.

Birds of Prey utilizes a lavishly illustrated tutorial to guide you through learning the game solo and the concise rulebook is designed as a reference for rules questions only. The play aids are built to keep the rulebook in the box during play. Laminated play aids hide complex systems under easy to use mechanics and aids. Data cards for twenty-four aircraft and twenty-four missiles, plus an exciting set of scenarios, cover air combats from the dawn of the jet era through today.

This is the digital edition of the rulebook plus three associated game books. The download is a 29.2MB zipfile and contains the following files in PDF format: