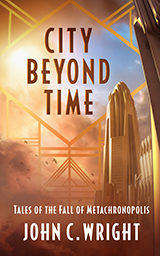 Metachronopolis is the golden city beyond time. Ruled by the Masters of Time, who can travel freely throughout the multitudinous time lines of Man’s history, the city is a shining society of heroes and horrors. For the arrogant Masters, who steal famous men and women out of the past and bring them to the eternal city for their amusement, are not only beyond time, but beyond remorse and retribution too.

City Beyond Time: Tales of the Fall of Metachronopolis is John C. Wright’s mind-bending and astonishingly brilliant take on time travel. In making use of a centuries-spanning perspective similar to his highly-regarded  Awake in the Night Land, Wright expertly weaves a larger tale out of a series of smaller ones. Part anthology and part novel, City Beyond Time is fascinating, melancholy, frightening, and a true masterpiece of story-telling.

John C. Wright has been described by reviewers as one of the most important and audacious authors in science fiction today. In a recent poll of more than 1,000 science fiction readers, he was chosen as the sixth-greatest living science fiction writer.