A reader of both the history of firearms, history, and science fiction generally leads to a collision of all three. I have discussed how many governments chose not to make changes in small arms. Light machine guns were seized upon with enthusiasm but not self-loading rifles. You start to think of “what ifs?”

The Third Reich wins World War 2 is a favorite of speculation. What if the Wehrmacht decided to go with Heinrich Vollmer’s ideas on an assault rifle in the middle 1930s? Could the Wehrmacht been able to take Moscow in 1941, thereby disrupting the Soviet Unions rail lines? Rail lines were like spokes from Moscow. Take Moscow and movement of supplies becomes far harder for the Soviets.

What if the French had gone with something like the self-loading MAS 49 instead of the clunky bolt action MAS36? You might have seen the German army casualties climb precipitously in the Battle of France. Perhaps enough to slow down the Germans and give France a breathing space.

John Pedersen attempted to sell the idea of his self-loading rifle using .276 caliber cartridges to Vickers in late 1920s. The image came to my mind of Anglo-Indian troops piling up dead Japanese Imperial Army troopers at the Jitra Line in Malaya in December 1941.

Also, what if the U.S. Army decided to put off a self-loading rifle during the 1930s. You have a situation of the U.S. Army fighting almost exclusively with the venerable Springfield ’03.

All the alternate histories I have seen so far by Gingrich and Turtledove have the Japanese sink the entire U.S. Fleet on December 7, 1941 and overrun Hawaii and parts of Australia. I would be interested in seeing a counterfactual where everything goes wrong for the Japanese. No humiliation of the Europeans in the Far East means a possible extended colonial period.

S. M. Stirling does have small arms alternate scenarios with his Draka series. The Draka are the descendants of a fusion of South Afrikaners and Loyalist Americans with some exiled Confederates later. As someone put it on a forum, the Draka have a crystal ball and always a generation ahead on weaponry, technology, and tactics. 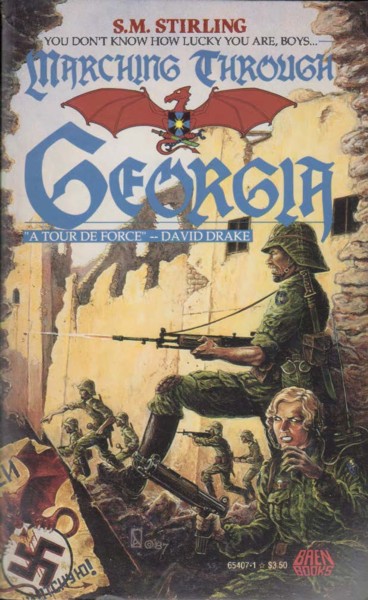 Union in WW2. The Draka paratroopers use an assault rifle (the Holbars T-6) that fires a 5 x 45 mm cartridge and uses 75 round drum.  It makes for interesting reading, but I do have some problems. One is the idea of transplanting American Loyalists to South Africa instead of Canada. Governments generally look to cut costs when to their benefit. Shipping allies after losing a war half way across the world is not going to fly.

Militaries have a tendency to be conservative and stay with what worked the previous war. I find it hard to believe that Draka generals would constantly be looking for the next generation of rifle. That is just not how history works.

Last week I mentioned about the future and Fourth Generation warfare. I have come across a couple of items that show that great minds think alike.

First, CZ has the Scorpion EVO 3 S1 carbine. This beauty uses 9 mm pistol rounds, has a 20 round magazine, and weighs 6 lbs. I could see police using this in the more dangerous cities. 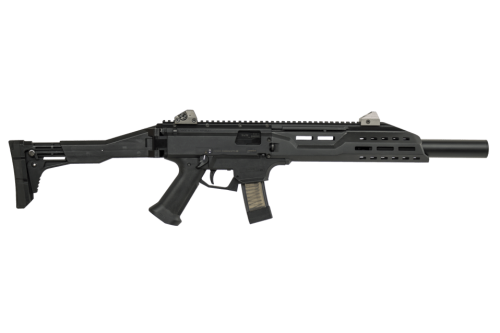 The other item is Springfield Armory’s Saint Victor line of weapons. The Saint SBR (Short Barreled Rifle) is essentially a carbine firing the 5.56 NATO round on an AR platform. The Saint AR-15 “pistol” come in two versions. One fires the 5.56 mm round, another fires the .300 BLK. The .300 BLK is a 7.62 x 35 mm cartridge. We are getting back into the M-1 carbine area. In theory, this round is heavier hitting than the 5.56 NATO.  The Saint AR-15 weighs only 5 lbs 9 oz.

The .300 BLK might be a good cartridge for para-military/ constabulary/gendarmes/ marechaussee in the future battling urban gangs.

William Lind has written on gangs:

“As states continue to weaken, more and more of them will confront rising gang violence and consequent declining civic order. The state’s first responsibility is the maintenance of order. It was for that purpose the state arose, and if it cannot do the job its legitimacy will vanish.

The question then becomes how to restore order. The only possible answer is, by any means that will work. If the state is still capable of it, bloody repression has much to recommend it. But a growing number of states will not be capable of it, either because they are too weak physically or because the state leadership is too weak morally.”

We could be entering the golden age of the carbine.