A Song of Frustration and Fun (But Mostly Fun) 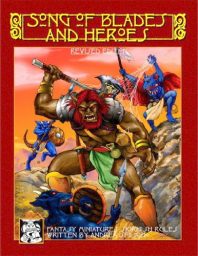 Only $15 for a hard copy of the rules, and well worth it.

The multi-dimensional balancing act of wargame design has led to a proliferation of titles. The huge number of variables that have to be juggled in even the simplest of wargames presents a huge number of opportunities for wargame designers to seek out the “sweet spot” in everything from level of detail to movement schemes to combat mechanics and even and especially morale. Far from a bug, this is a feature of the hobby, as it allows ample opportunity for every wargamer to seek out the one ruleset that hits all of his preferred sweet spots – the thrill of the hunt can provide interest even if the perfect ruleset has not yet been found. And this hunt needs must be undertaken for each genre and period – what works great in one setting might not work well in another.

A great example of such a ruleset is the base mechanics that underlie the “Song of” series by Andrea Sfiligoi. Originally a fantasy skirmish ruleset called, “A Song of Blades and Heroes”, these rules have official adaptations for just about every setting a wargamer could hope for, including post-apocalyptic wastelands (“Mutants and Death Ray Guns”) to modern conflict (“Flying Lead”) to Napoleonics (“Song of Drums and Shakos”). The “Song of” engine works great for low-tech settings where melee is the most effective means of putting your opponent’s forces in the ground, but not so well for more modern settings where combat boils down to two groups hunkered down and shooting at each other across a distance.

Understanding why this should be so requires an understanding of how the original version of the game hits so many sweet spots in fantasy skirmishing. The “Song of” engine also provides an excellent example of how to add uncertainty into a wargame while still handing the players sufficient control over their forces to allow for meaningful strategic and tactical choices.Figures in the game possess just two stats – a combat ability stat and a quality stat. The former does just what you would expect with all combats revolving around a simple dice-off where the combatants add their combat score to a d6 roll. High roller wins, although in this case the winner’s die roll determines whether the loser is hurt (on an even die score) or simply pushed back (on an odd die score). The quality stat determines morale effects which don’t just come into play when casualties occur. The quality stat also indicates how motivated a figure is to actually go about following the player’s orders. This is where the game truly shines.

On a player’s turn, he nominates one figure at a time and announces how many actions he wants that figure to undertake. Moving, shooting, attacking are the usual options, although special abilities can also require one action. The player rolls one die for each attempted action, up to three, and for each roll that meets or beats the figure’s quality score, the figure may take one action. The kicker here is that if the player fails on two or more dice, his turn ends and play passes to the opponent. This opens up a huge number of choices for the player.

The safe play here is to simply give each figure one action per turn. You can’t fail on two dice, and any figure that passes this quality check can advance or fight or what-have-you. But what if a player wants to rush into combat and attack on the same turn? Then he has to risk failure. Moving into combat is one action, as is actually attacking. How confident you are that your figure will pass those checks plays a big role in how much you can risk each turn. Sure, your big expensive hero might reliably pass two or even three quality checks per turn, but if my rabble can pile four figures on in one turn, he will have a tough fight on his hands.

To add complexity to a game where each figure’s stat line consists of just two numbers, the game uses a ‘tag’ or ‘skill’ system to modify figures. Each ‘tag’ can be positive (e.g. increased speed or leadership abilities) or negative (e.g. decreased speed or greedy figures must stop to rifle the pockets of any figure they kill, and help to distinguish one force from the next.

To get an idea how different two forces can operate, here’s a brief after-action report of a game that pit an ogre-led force of unmotivated orcs against a far more motivated undead gang. In addition to securing victory points through killing the other guys off, this scenario also includes three loot counters, one of which holds a fabulous treasure. Getting it off the board awards the happy looter a significant Victory Point boost equivalent to killing either four orcs or four skeletons.

First, the forces and a bit of obligatory wargaming eye-candy.

Otus the Necromancer, so named for the headgear that reminds me of an Erol Otus artwork, who brings a handful of skeletons, a handful of zombies, and a dark spectre to the table. (For you fans of the game, the spectre used the stats for a mummy from the main rulebook.)

On the other side is Ogre Joe and his Howling Orc Commandos, which includes a hero, a shaman, and ten mooks.

The table consists of a roadside chapel and the wild lands behind it. A lone woodcutter’s cabin sits amid the hills and bracken, tucked far enough into a corner to play little role in the game. The table shown here is heavy with terrain, to help represent the wild lands into which the two forces are to meet.  The numerous terrain pieces also force choices on the players – stay together or spread out?  Run around terrain or plunge on through?  Choices equals freedom, and freedom equals fun. 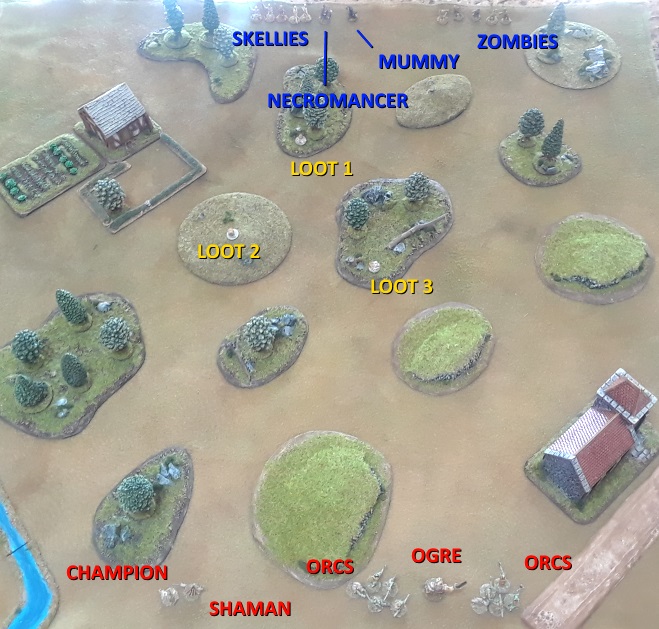 As it turned out, placing one of the loot counters too close to one table edge was a mistake. The Otus the Necromancer ordered his skeletons to march en masse and they snatched it up on turn four. Meanwhile, Ogre Joe had a devil of a time getting his troops in gear. His chief lieutenant raced up to fight the spectre in single combat, but Joe couldn’t mange to roll an activation in the first three turns of the game. 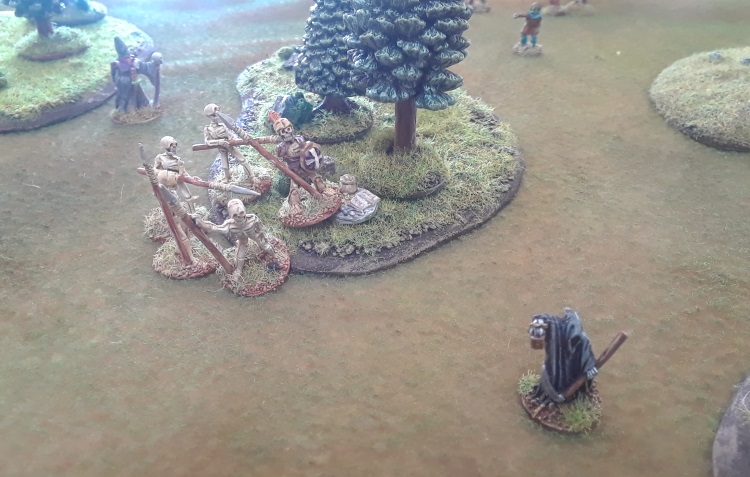 First time lucky. The mysterious treasure secured in the bony hands of the undead abominations.

By the time his boys worked up the courage to face the undead horde, the loot had already been found in the first crate investigated and hauled off the board. The death of the orc hero the next turn sealed the victory for Otus – only a miraculous slaughter of the undead with no casualties on the orc side could have secured victory Joe and his hastily renamed Cowardly Commandos. 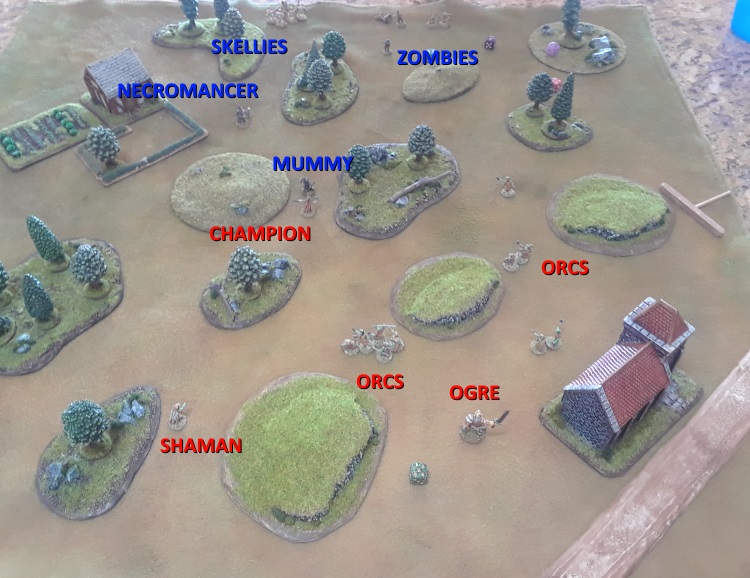 After six turns, the orcs still haven’t crossed half the battlefield. That’s with Joe’s leadership bonus.

Note that even a Necromancer can have issues with motivating his troops. Even as his high-quality skeletons made short work of the loot crate, his low-quality zombies did nothing more than shuffle around on the periphery of the table for the entire game. Even with five chances per turn, only one zombie managed to roll that vital 6 to shamble forward a little in the first three turns. 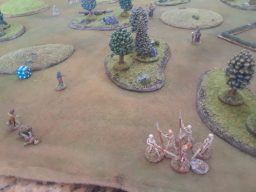 Victory or death…well, in this case death and then victory.

Some players would find a game like this aggravating. They demand perfect chess-piece-like obedience from their figures. But few generals have ever had the luxury of immediate and unquestioning obedience from their troops, and games that include an activation mechanic present a much more faithful simulation of the experience of commanding troops from the rear echelon than those that allow perfect movement up until first contact with the enemy. The only advice I would give to potential players of this game would be to try and pit gangs with similar quality troops against each other. When one gang can literally run circles around the other, no amount of balancing the figures through point-costs can give Joe a shot at spoiling Otus’ fun.

Which brings us full circle to why the “Song of” engine doesn’t work as well for modern miniature wargames. The activation process plays a huge roll in determining who gets to position their models where, and as a knock-on effect who gets to choose which models fight which. In modern games where maneuvering quickly gives way to hunkering down and trading volleys at a distance, the elegance of the game gives way to the pure back and forth of oppositional shooting galleries. This game walks a fine line that works great for fantasy games, but stumbles when ported over to a modern line.

So if you want a tidy little fantasy skirmish game that you can play with a dozen figures and fight from start to finish in an hour, “Song of Blades and Heroes” and the various supplements are well worth your time. Just don’t bother with the modern reskins. For modern and far future games you’ll have to experiment with a host of other rule systems to find one that works for you. But then, wargamers know that is half the fun.