Tales of the Once And Future King 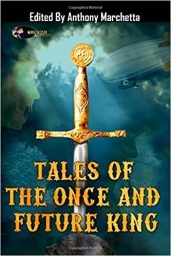 Stop me if you’ve heard this one before: Uther Pendragon sires a secret son and with his last breath sticks his sword into a rock and proclaims it a test to determine who shall inherit his crown. Arthur yoinks the sword, founds Camelot with its Knights of the Round Table, saves Britain from multiple threats, and finally dies at the hand of the bastard son sired by Arthur and his half-sister. Along the way King Arthur’s knights engage in antics of both heroic and debauched, and generally fail to heed the warnings of Arthur’s chief advisor the (wizard?) Merlin. In the end, we are told that King Arthur will one day return to Britain in her hour of greatest need.

Better yet, don’t stop me, because you’ve never heard this one quite like this before.

Fans of the King Arthur myth understand that it is not just A story. It is THE story. The rise and fall of Arthur encapsulates the history and myths of Western Civilization, and includes all of the best and worst that post-Roman European culture has to offer the world. From Arthur’s rags to riches rise to the arrogance that leads to his fall, to the redemptive arc that runs through the final stages the story, it even manages to embrace both western pessimism for the state of the world today and its optimism for the future. It is at once the story of one man’s heroic journey, but a story that includes space for the tales of his coterie of knights as they struggle to defeat their own challenges both internal and external. As such, the legend of King Arthur goes beyond just THE story and becomes ALL of the stories. It’s not just a legend, and its not just a genre. Taking all of this into consideration, the King Arthur myth becomes a narrative device – a means of storytelling narrow enough to provide context all out of proportion to length, and wide enough to create space for adventure quests and morality plays and even execrable feminist doggerel. The legend’s scale and scope occupy a large enough chunk of literary real estate to have earned its own moniker – Arthurian.

The rich vein of the Arthurian legend has been tapped countless times by authors and film-makers, each with their own spin and take on the subject matter, and most of them using the deep cultural cachet of the story lend weight to thin plots, weak characters, and stomach churning political messages. By now the Arthurian “brand”, such as it is, has been so watered down that fantasy enthusiasts can be forgiven for rolling their eyes at each new entry into the field. They would do well to set aside their reservations upon seeing the cover to the recent Arthurian collection, Tales of the Once and Future King. This collection, edited by Anthony Marchetta and published by Superversives Press, represents a triumph of the genre on both the technical and the entertainment level.

Already a collection of stories united by their Arthurian inspiration, this collection is further united by a narrative that presents four weary travelers crossing Britain during a vaguely modern time of troubles. Lost in a dark wood, they find themselves captured by…bandits(?)…one of whom claims to be the Bard of Britain, Speaker for the King, and heir of the legendary bard, Taleisin. The interplay of these four wanderers and their captors provides a framework for each of the individual stories to both inform and influence the action. The result turns Tales of the Once and Future King into a strange hybrid at once a novel featuring Inception-style levels of tales within tales within tales, and a complete narrative in its own right.

It’s not the first book to use this technique, but it is one of the most effective. In most cases, a narrative framework for stories from a collection of authors feels bolted-on – an awkward and hamfisted excuse to pad the length of a book, and often one that come across as being as cheap and as lazy as a sitcom clip episode. Marchetta’s use of the narrative framework is seamless. The placement of the tales is deliberate, the characters within the larger framework react to the stories in the collection naturally, and the action in the interludes lays the groundwork for the story to follow. In most collections of this type, the reader can safely read the stories in any random order and the narrative within the framework won’t lose any of its punch. In this case doing so would lead to a nonsensical series of non-sequiturs. The deftness with which these stories are tied together elevates the quality of entire collection to create a title even greater than the sum of its parts – and its parts are excellent.

Though a little heavy on the YA side of storytelling, the individual tales evoke the sense of wonder and majesty that the theme of the book demands.  Taliesin’s Riddle, by Peter Nealen, starts things off with an Arthurian contemporary tale of a knight facing his first significant test.

From these first two short reviews, you can already see how much variety this collection contains.  Not content to limit itself to prose, the collection gives us Ben Zwycky’s epic poem, The Beast.  The modern day ghost story of Jonathan Shipley’s Lady in Waiting eschews the iron-clad route to delve into the depths of the Lady in the Lake.  L. Jagi Lamplighter brings her own dreamlike take on the mythic cycle, in Understudies of Camelot, one that touches deeply upon the central Christian core of the mythic cycle.  We even get a World War Two adventure story in R. C. Mulhare’s Sacred Cargo.

All in all, Tales of the Once and Future King presents a very satisfying collection of short stories.  Like the best of symphonic music, the variations on a theme are used to the best extent possible to give the reader that ever elusive “same, but different” quality that trips up so many creatives in the written and visual arts.  Although the settings vary wildly, the central core of the Arthurian mix acts as a perfect framework within which to present a wide variety of tales.  In it, Marchetta proves that the rich mine of the story of King Arthur and friends is anything but played out.