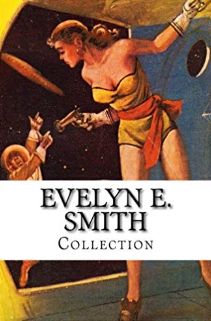 It turns out there was a second E. E. Smith working in the field of speculative science-fiction back in the day. In addition to Doc EE Smith, one of the original Big Three of science fiction, a woman by the name of Evelyn E. Smith made frequent contributions to Galaxy Magazine.  A crossword puzzle compiler by trade, Evelyn published several gothic romances under the pen name Delphine C. Lyons, and wasn’t above scoring a little extra money on the side by adding a splash of lighter fare to the heavy hearted hard science-fiction periodicals.  Perhaps helped along the way by her husband, H.L. Gold, the editor of Galaxy Magazine throughout the fifties, her work nonetheless stands on its own merits and continues to please readers to this day.

Her best known work, The Perfect Planet, centers on a planetary health spa run by women who allow their men to think they call the shots.  After 200 years of isolation, the planet is rediscovered by equalist Terran explorers shocked by the inegalitarian society they find.  For their part, the locals are as appalled by the fat and unattractive Terrans as they are by their egalitarian ways.  Played for laughs with black market sweet shops, sitcom level humor, and a bit of slapstick, Evelyn used the speculative nature of the work to poke fun at the fitness culture of her day with an easy going attitude rather than a purely malicious and resentful one. 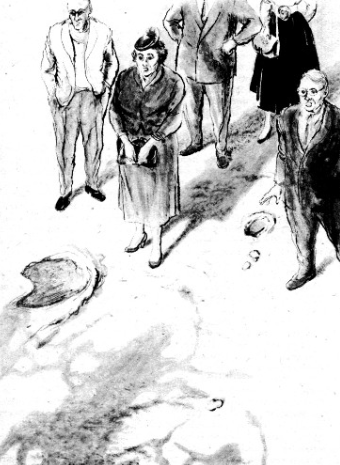 Not Fit for Children Galaxy Magazine, May 1953

Her short story, No Place for Children, deals with a pod of aliens marooned on a small asteroid in our home solar system.  Told from the point-of-view of mischievous children in the pod, Evenlyn utilized a very modern show-don’t-tell strategy to present a race of telepathic, multi-armed giant chipmunks as an odd mix of alien and familiar.  The children who sneak up to the surface of their asteroid meet with a scheduled tour group to con the human tourists out of a few ordinary coins – coins which contain alloys vital to the repair of the asteroid’s drive system and hence the survival of their pod.  Her imaginative reach perhaps exceeded her grasp as despite the vague descriptions of the tech and the nonsense words used to convey inhuman concepts, the aliens nonetheless engage in typical human trickery, affection, and rivalries.  While it might not rate as an all time great, the brief vignette of alien-human interaction makes for a charming tale and a pleasant example of a more domestic adventure set in outer-space.

Her short story My Fair Planet, published in the March 1958 issue of Galaxy Magazine amounts to a much darker example of gallows humor as a none-too-bright actor meets the lone emissary of an alien species intent on wiping out humanity.  Before launching their attack, the alien spy, Ivo, must discover what sort of defenses humanity can mount, and the obliviously narcissistic actor Paul Lambrquin, makes for a perfect dupe.  Unfortunately for the alien conquerors, Paul inadvertently uses Ivo’s own narcissism against him by teaching the alien a love of the theater that sees Paul sent to Ivo’s home planet while the shape-shifting Ivo assumes Paul’s life on earth.  The humor in the story arises from the subtext of the interplay of the two protagonists, an interplay presented with a note-perfect deft touch by Evelyn Smith.  The misunderstandings and failure of the protagonists to correctly understand each other’s motivations are written in a way that’s obvious to the reader, and that turns the sitcom style bumbling of the actor and alien into something a bit more intellectual than the norm.

From Fanac with h/t to GalacticJourney

Evelyn E. Smith may not an author whose name appears in many lists of great writers.  She is often overlooked by the strident “women have always been with us” clickbait writers, perhaps because her writing shines with a warmth and good natured acceptance of the mars-venus duality of man rather than a bitter condemnation of it.  Her stories don’t presage great changes or promise a utopian existence just around the corner.  She doesn’t write rollicking adventure stories replete with daring rescues and two-fisted heroics, or long-winded philosophical treatises wrapped in hard science jargon.  She writes pleasant escapes with a skilled hand and subtle depth of understanding of the human condition that results in enjoyable stories that represent a welcome change of pace from the more strident or frenetic or intellectually naval-gazing stories.

Evelyn E. Smith wrote a kind of gentle, domestic science-fiction that feels more original and free-thinking than much of what passes for ground-breaking works you find on store shelves today.  She might not have set the world on fire with her tales, but no doubt Evelyn’s writing warmed a lot of hearts in her day, and will continue to do so for decades to come.