A Princess of Static 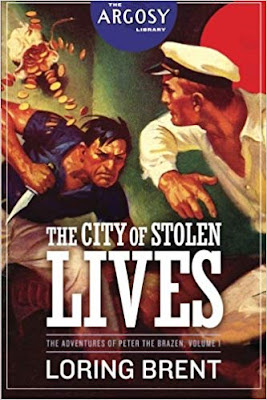 Radio operator Peter Moore, the man of brass and later to be called Peter the Brazen, gets caught up in Chinese intrigues in “A Princess of Static.” Peter is called out as a major inspiration to Doc Savage, from the man of brass/Man of Bronze nicknames to the technologist as a heroic man of action. Peter, however, is not blessed with all of Doc’s talents, nor colored after the metal of his name.

Peter is a brash, skilled radio operator in a Pacific merchantman company gifted with sensitive ears that allow him to hear radio messages at ranges well beyond his peers. As such, he’s able to punch his own ticket in the company. Like most commo guys, this has gone to his head.

In his first adventure, Peter’s friendship with certain shadowy gentlemen in San Francisco’s Chinatown tip him off to a bit of human trafficking about the Vandalia. A “very high lady,” in fact. So Peter joins the Vandalia’s crew.

As the passengers embark, Peter notices a Chinese woman escorting another woman in a gray hood. They enter an empty cabin unregistered to any passenger.

Soon after, the Vandalia’s radios are plagued by a noise jammer that defies all attempts of Peter’s fellow signaleers to isolate. Peter listens to the signal and discerns a message below the noise. It’s a cry for help, and it’s coming from somewhere aboard the Vandalia.

Peter stalks the empty cabin for fleeting traces of the now-vanished women. Meanwhile, the captain is trying to force Peter to drop the investigation.

When Vandalia arrives in China, two passengers try to board a ferry from the ship in the dead of night. Peter interferes, and ends up rescuing Aileen Lorimer, the hidden signaleer, who he sends to the American consulate. He thinks he’s done with her.

Aileen, once abducted to be a birthday gift for a Chinese lord, turns out to be the first of Peter the Brazen’s love interests. Or maybe the third. Adventure and radio appear to be the first two.

Overshadowed is perhaps the best word to describe this first Peter the Brazen tale. It was popular enough to be collected into a novel in 1919. But with the rise of Black Mask and Weird Tales, “A Princess of Static” was quickly relegated to an honorable mention in pulp adventure.

The action is blink-and-miss-it quick, the exoticness of China and Chinatown is subdued compared to the chinoiseries of the late 20s and early 30s, and the less said about the Chinese-accented dialogue the better.

Even for a current-day signaleer, the radio sections are dry. But this was one of the first stories by Loring Brent (also known as George F. Worts), and that newness can be seen in the story. Peter’s character is still being developed. Here, he’s more an excuse to discover a cute girl with radio skills in a faraway land. And while many elements of the story are thin compared to what would arise in the 20s, there was enough to catch readers’ interests for decades.

Part of that is authenticity. Worts was a radioman sailing from one Chinese port to another. And, even as the technologies change with the decades, a signaleer can recognize his own. Worts’ China also has a nightmarish vividness to it that stands out from later Argosy chinoiseries such as Wirt’s steppe battles in “War Lord of Many Swordsmen”. Even then, it is overshadowed by what the Weird Tales authors brought to the Chinese adventure.

Save Peter the Brazen for after you’ve read a number of pulps. This isn’t one to make a new pulp enthusiast with.