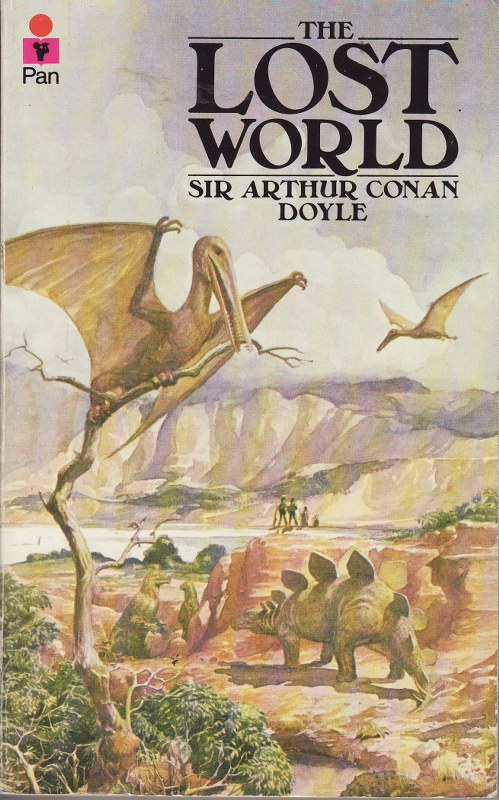 While far from unknown, and especially popular in the first few decades after its release, Sir Arthur Conan Doyle’s The Lost World is rarely mentioned as a pulp adventure.  And yet, released in 1912, the same year as Tarzan of the Apes and a year before The Insidious Dr.Fu-Manchu, it’s part of the same tradition.  Primarily known for Sherlock Holmes, Doyle was also a fine adventure writer who excelled at describing action, particularly combat.  His The White Company back in 1891 was an outstanding historical fiction adventure I would rank even more highly than Stevenson’s The Black Arrow three years earlier, and his foray into science fiction two decades later was every bit as fruitful.

It all begins with a man trying to impress a woman.  Edward Malone, an Irish journalist, is infatuated with a Gladys Hungerton, only for her to reply that she can only love a man who has accomplished great deeds.  As she poetically states it,

But, above all, he must be a man who could do, who could act, who could look Death in the face and have no fear of him, a man of great deeds and strange experiences. It is never a man that I should love, but always the glories he had won; for they would be reflected upon me. Think of Richard Burton! When I read his wife’s life of him I could so understand her love! And Lady Stanley! Did you ever read the wonderful last chapter of that book about her husband? These are the sort of men that a woman could worship with all her soul, and yet be the greater, not the less, on account of her love, honored by all the world as the inspirer of noble deeds.

Soon Malone gets a chance to do just that, when he meets the eccentric Professor Challenger, and along with Lord John Roxton and Professor Summerlee, journeys to the Amazon to investigate the possibilities of dinosaurs.  Malone occupies a similar role to Dr. Watson in the Sherlock Holmes stories; he is the narrator, and a capable, competent hero, but far from the most impressive and interesting of the protagonists.  Which is not to say that Malone is either an everyman or a Mary Sue.  He is described as massive and physically powerful, a reserve on Ireland’s national rugby team, and possesses a unique brand of courage.  While denying that he is brave in the traditional sense, Malone talks about his “horror of cowardice” and how the “terror of such a stigma” prevents him from acting as anything less than a heroic British gentleman.

While not quite as memorable a character as Sherlock Holmes, Professor Challenger isn’t far off, and also ended up being an inclusion in Philip Jose Farmer’s Wold Newton.  Possibly modeled after Isaac Newton, Challenger is an eccentric genius, but of a far more volatile, ornery, and violent variety.  He will not hesitate to physically attack anyone contradicting or annoying him, as Malone finds out in their first meeting.  Physically, while Holmes was tall and lean, Challenger is short and powerfully built.  However, both men share a love for showmanship that makes for exciting, flamboyant reveals.

Lord John Roxton is a fine hero in his own right, who will likely conjure up thoughts of Allan Quatermain.  While much younger than Quatermain during most of the latter’s adventures, Roxton is also a legendary hunter and explorer.  And he has a zest for life and genial nature that Quatermain lacked.  The reader finishes the book wanting to learn much more about Roxton.

Professor Summerlee might appear to be the the most non-descript of the group, but he is interesting for the approach Doyle takes to the story.  Initially, he is set up as Challenger’s professional enemy, who heaps scorn on the latter’s wild theories of dinosaurs in the Amazon.  And yet, when offered a chance to visit there himself, Summerlee does not shy away, and accepts the offer.  Many authors would take the opportunity to make the character into a villain, or at least a coward, but Summerlee is anything but.  Despite being the oldest of the group, Summerlee keeps up with his younger compatriots, and is every bit as willing to risk life and limb, displaying constant bravery and ingenuity in the face of certain death.  He may be a skeptic, but he is a hero all the same.

I spend this much time describing the four main protagonists since, among other themes, the dominant one is male camaraderie; four different types of heroes who rely on one another to survive the perils of dinosaurs, ape-men, and men alike.  Whatever the professional rivalry and bickering between Summerlee and Challenger, it never interferes with risking their lives on the quest, including for one another.  It’s simply the way any true, honorable man should behave.

As with Sherlock Holmes, one of the best series at describing and conveying a sense of the late Victorian British Empire, The Lost World swells with pride in the British race.  (As, indeed, does The White Company)  Himself an Irishman born in Scotland, Doyle makes no distinction between Englishman, Welshman, Scotsman, or Irishman.  All are worthy, equal members of the great nation of Britain, and the four protagonists exhibit the ideals of courage, intelligence, and fair-mindedness any Brit should aspire to.  (Amusingly, in other works Doyle shows a deep respect for and fascination with America, and laments that such natural brothers as Americans and Brits should have quarreled and split up, which he blames George III for)

The book has no shortage of science fiction elements, including Challenger’s ruminations on anthropology and natural history, as well as the most evocative descriptions of savage, bloodthirsty pterodactyls one will ever read, but it’s always in service to a tale of daring and adventure rather than for its own sake.  Thus, it’s very much a part of the pulp tradition.

As mentioned above, the book is a celebration of male heroism, and this is perfectly illustrated by the ending.  I won’t spoil it, except to note that Malone returning to Gladys is one of the funniest and most realistic conclusions to a romantic arc that I’ve ever read.  It’s even more hilarious because Doyle chooses that, of all places in the book, to unfurl his keen wit and comedic description.  Yet, it’s more than just a wry observation on the hypocrisy and perfidy of women.  The subsequent conversation between Malone and Lord John Roxton, ending with a handshake and promise of further adventure, perfectly concludes the book’s themes.  Namely, that heroism is worthy and should be pursued for its own sake, not that of a woman.

I highly recommend it to all readers.