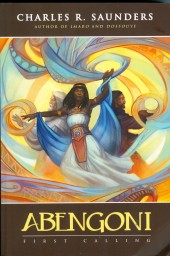 Robert Jordan’s The Eye of the World in 1990 was the beginning of the era of the big, fat fantasy. That era continues to the present with George R. R. Martin’s A Song of Ice and Fire, which may or may not ever be finished (like Jordan).

The term “epic fantasy” is sometimes used for these 600 + page, multi-volume series. Karl Edward Wagner attempted to use the term in the late 1970s in place of “sword and sorcery.”

Epic Fantasy has taken on a different meaning. There is generally an ensemble cast of characters and a plot that involves saving the world. More often than not the form degenerates into what I call “soap-opera fantasy” or “corporate fantasy.”

In the late 1990s, Charles R. Saunders had told me in a letter that he was working on a big scale fantasy. Saunders was part of that 1970s golden age of small press sword and sorcery. He was one of the few that made the jump to paperbacks with three books featuring Imaro. Saunders used a fantasticated African background making use of history and mythology. The Imaro stories are classic sword and sorcery with a hero and lots of sorcery and eldritch horror. Unfortunately, D.A.W. made missteps in marketing with the first book and did not push the second and third books. Distribution was especially poor for the third Imaro book.

Charles Saunders shopped his epic fantasy around at the time. There was no interest at least from the big publishers. Luckily, Richard Tyler of Sword and Soul Press published the fourth Imaro novel and Dossouye. Milton Davis’ MV Media has published the Saunder & Davis edited Griots anthology and now Abengoni: First Calling.

Saunders has this to say in the introduction:

“Generally speaking, there are two major types of fantasy fiction: heroic and epic. Heroic fantasy– also known as “sword and sorcery’ – focuses on the exploits of a single, larger-than-life character. The literary archetype for heroic fantasy is Conan the Barbarian, created back in the 1920s by the late Robert E. Howard. Epic- also referred to as ‘high (but not on drugs) – paints on a broader canvas, with numerous characters interacting in multiple storylines. J. R. R. Tolkien’s Lord of the Rings trilogy is the ur-text of modern epic fantasy, and George R. R. Martin’s Game of Thrones saga is its present-day exemplar.”

Abengoni: First Calling is the first book in Saunders’ epic fantasy. MV Media published this book in 2014. It is in trade paperback format. The novel comes in at a lean 351 pages. The cover art is good and appropriate.

The plot involves the kingdom of Matile Mala, ostensibly an empire that is on the way down and on the way out. At one time, it dominated a good portion of the continent of Abengoni until a ruinous war with a former colony plunged it into decline. Abengoni has similarities to Africa but appears to be smaller. There is no Sahara desert analog.

The empire once had trade with a European stand in before the war with Uloans set in motion sorcery that got out of control. The Sea of Storms prevent any ships getting through to the continent of Cym Dinath.

Matile Mala is under constant assault from the Uloan islanders and inland from the Thabas. The Thabas were once under the dominion of Matile Mala but have thrown off the yoke and constantly probing and expanding. They are sort of like the pastoral Bantu tribes of southern Africa.

The novel starts out with a religious rite summoning the sea goddess. The ceremony is interrupted with the arrival of a large ship that carries caucasoids (called Fidi) from Cym Dinath. Their leader is Kyroun, an apostle for the god Almovaad. He is a sort of St. Paul type figure though with better sorcery.

The arrival of the Fidi spurs the villainous Uloans (who worship a spider god) to launch a genocidal war against Matile Male. There is a great battle scene of street fighting against the invading Uloans with lots of sorcery involved.

Issues are resolved but new questions arrive. The book ends with a very big revelation that will be dealt with in the next volume.

Saunders is a first class world builder. Abengoni is a fully realized world. He is a very efficient storyteller. Dialog serves the purpose of moving the story with no excess padding. Soap-opera elements are mercifully absent in his fiction. That is not to say there are not human relationships, they exist but are not beaten to death.

I generally avoid big, fat fantasy series. I stopped reading George R. R. Martin with A Feast for Crows when it became apparent that Martin has lost control of the story. Saunders’ Abengoni shows big canvas fantasy does not have to be bloated. Someone send George R. R. Martin a copy of this book to show how it is done.

What amazes me is how no one picked up this book. With all the pronouncements about diversity in the new science fiction and fantasy, Saunders should have been given a contract and a good sized advance years ago.

Talk is cheap. If publishers and editors were serious, they would be contacting Stafford L Battle, Milton Davis, Ronald T. Jones, Melvin Carter, and others for stories for anthologies if not novels. Actions speak louder than words.

You can order Abengoni: First Calling at Amazon.com or www.mvmediaatl.com.