An Equation of Almost Infinite Complexity

An Equation of Almost Infinite Complexity 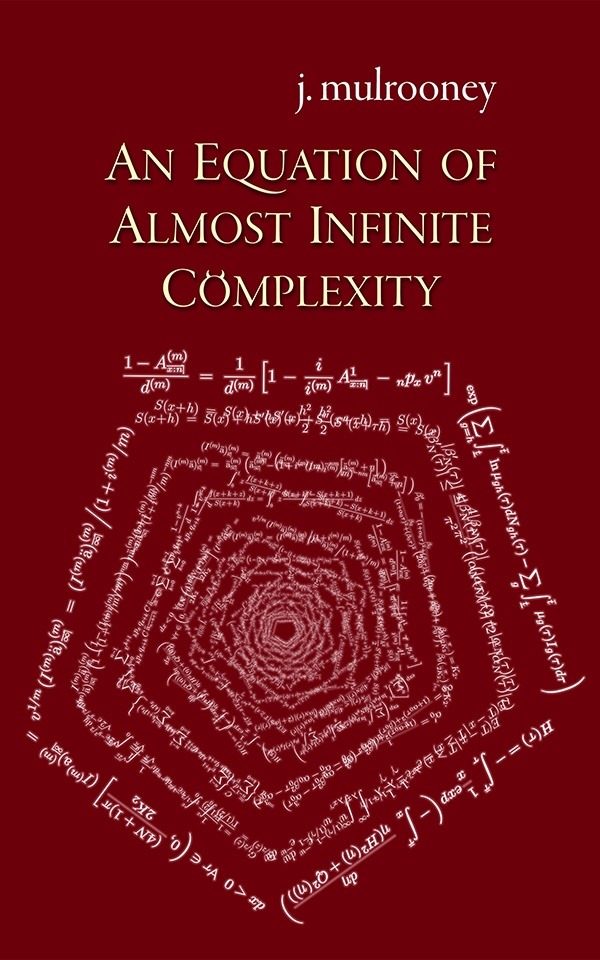 is now available in audiobook+. If you’re potentially interested in this very funny and very Canadian satire, you can listen to a nearly two-hour free sample  at Unauthorized.

When the devil moves in next door to Cooper Smith Cooper’s house, Cooper doesn’t know what to make of him at first. But when the unexpectedly neighborly Mr. Scratch helps the unemployed actuary find a job at a local insurance company with the help of some inside information into the activities of Death, Cooper decides the old devil might not be so bad after all.The only problem, Cooper thinks, is how to conceal from his fellow actuaries his newfound ability to perfectly predict the time and place of people’s deaths.

And then, there is also the small matter of the screams of his recently deceased neighbor coming from Scratch’s basement furnace to consider.

The audiobook+ of An Equation of Almost Infinite Complexity is now available at Arkhaven Comics. Narrated brilliantly in true Canadian fashion by Ken Dickason, the audiobook+ is 14 hours 17 minutes long and includes the ebook in both EPUB and Kindle formats. The paperback is also available at Castalia Direct.

From Chapter Five: The Loves of Thisbe

Thisbe pulled the car into traffic. “Songs about lovin’ and livin’ and good-hearted women…” sang the countrified radio.

“Songs about chintzes and blintzes and sprained arms in splintses,” sang Julius. He turned the radio off and sang with a Nashville accent: “Get your tongue out of my mouth baby, I am kissing you goodbye.” He spoke: “You can’t improve on that one, really.” He went back to the radio song: “Songs about sneezes and cheeses and snot when it freezes…”

“Julius,” said Thisbe, mock-annoyed, shifting gears and passing a car on the right with a stomp on the accelerator.

“I’m just one rhyme short for you: ‘Songs about frisbees and Thisbes.’ I suppose I could add ‘how-did-you-miss-me-s’ or something like that.”

“No one was ever elected Pope by offending the Jewish vote. To judge by the number of Holocaust movies, the world is now seventy-five percent Jewish.”

“Julius…” said in a warning.

“I know, I know. Even the nephew of the king must be careful.”

“You aren’t the nephew of the king.”

“True. I got my job on merit. I blackmailed a politician.” Julius was in a government ministry, a job which he claimed combined the best of banking (“hours: ten to three”), teaching (“we do nothing between June and September”) and prostitution (“that little thrill you get when the hand drops into your pants is actually us, reaching for your wallet”).

“Blackmail is just as much a job skill as dating the boss’s daughter or having large breasts. You get what you put in. That’s my motto.”

But Thisbe changed the subject. “It’s too bad you weren’t there for the service.”

“I can’t go to Scratch’s service. I’m an atheist.”

“Julius, it would be nice if I didn’t have to go alone to these things.”

“You weren’t alone. I came along after the service. Remember, I come from a family of atheists. In fact, a family of Catholic atheists. The kind who believe you have to be punished for your sins even if there is no God. My folks should actually be Unitarians, the church specifically designed for atheists with children. But I’ve progressed. I maintain an independent posture toward the World to Come. To the extent that I dabble, I believe that Allah is God and Mohammed is his prophet. In the meantime, I like German beer, country music, and the Montreal Expos, or, as we call them in English, the Washington Naturals. Women dig me.”

She understood that all this was male bravado, perhaps not particularly well done. “Why Mohammed?” she said, following his irrelevancy despite herself.

“Well, first of all, Mohammedans become cross when you disagree with them. You say to a Moslem, ‘I beg to differ,’ and the next thing you know a pleasant young woman in a burkha comes to the door and detonates a nail bomb hidden in her purse. The suicide bomber is Islam’s one truly original contribution to world culture this last four hundred years.”

“Uh huh.” Thisbe was tired of this.

“But more importantly,” said Julius, sensing he was unappreciated, “A refinement on Pascal’s wager. Pascal says that since you know you’re going to die, there are really two possibilities: you die and it doesn’t matter what you did; or you die and it does. He says you should believe in God because you don’t lose much by wasting an hour a week being Christian, and if God does exist, you could gain Eternity. It’s always worth betting on a long shot if the upside is pretty snappy—eternal life, for instance. Like a lottery ticket that costs less than you’d notice spending and could win you a million spondulix. I mean, why not invest a few hours?”

“So why won’t you come to church with me then?”

“As I said: a refinement. I took Pascal one better. He’s right. You should do at least the minimum if you might get eternal life. But what kind of eternal life? That was my question. Christian eternal life is endless contemplation of the Godhead. So that’s pretty good. Better than a visit to the proctologist, for instance, although some of my gay friends might disagree. But at least better than waking up and finding yourself the cheeseburger course in an eternal Satanic McDonald’s, which is what my ancestors believed.”

“But you don’t believe it.”

“In what, proctologists? Of course I believe in them. I’ve got the stretch marks to prove it. But that’s not what we were talking about.”

“You’ve got to be kidding.”

“It’s chauvinistic. Do the women get truckloads of men?”

“If you’re betting on an afterlife, go big or stay home is my advice.”

“What about the women?”

“No, the women who get to heaven.”