An Excerpt from BATTLESUIT BASTARDS 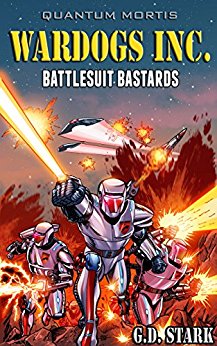 Created by Vox Day and set in the universe of Quantum Mortis, BATTLESUIT BASTARDS is the first book in the Wardogs Inc. military science fiction series written by G.D. Stark.

We unceremoniously stuffed the bodies into the small personnel airlock and flushed them out into space.

“Nothing illegal. Some more slug-throwers though, in wood crates,” I said.

“Not our business. Everyone meet up on the bridge in five. We’ve cleared our bodies here, we’ll finish there.”

“Roger,” I replied. Park hammered the tops back on the boxes, then exited cargo. I reset the seals on the door and we headed up to the bridge. It wasn’t a huge ship, so no lifts. Just ladders and stairs like an old atomic model.

We entered the bridge just as Private Ward was dragging out the body of the captain. Park saluted the dead man ironically and Jock laughed.

“Now we wait for a new crew,” said Squid from the late captain’s chair, a flask in his hand. “Lieutenant says their ship is on the way and they should be here within the hour. At ease for now.”

I looked around the bridge. Everything looked clean and well-maintained, though it was an older ship. Garamond read the name plate on the wall. Registration 1001x235htfg22789.113. Gruppo ENIL-EX, Valatesta.

I took off my helmet and set it on the navigation table next to a personal tablet, still displaying a colorful picture story its owner would never finish. Probably lots of time to read on freighters.

Almost exactly an hour later, a sleek black transport pulled alongside and hailed us. A few moments later, the boarding party joined us. The men wore the same navy blue jumpsuits of the guys we’d just spaced. Gruppo ENIL-EX uniforms, I assumed.

Their leader engaged with Sergeant Thrasher and a severe little man walked up to me. “Do you mind?” he said, then powered up the nav board. He tossed the tablet onto a chair as I gathered up my helmet.

“Good to meet you too,” I said, getting out of his way.

“Hmm,” he said, keying in some numbers.

“So,” I pressed, partly because I was annoyed, “got a hot date, then?”

“Not likely on Ulixis,” he sniffed.

“What? You don’t like furry chicks?” I remember jokes about the women of Ulixis, though I really only had a vague idea where the place was.

I considered shooting him in the back of the head, just on principle, then decided I’d rather not lose my bonus today. Squid didn’t take kindly to freelancing.