An Excerpt from HAMMER OF THE WITCHES 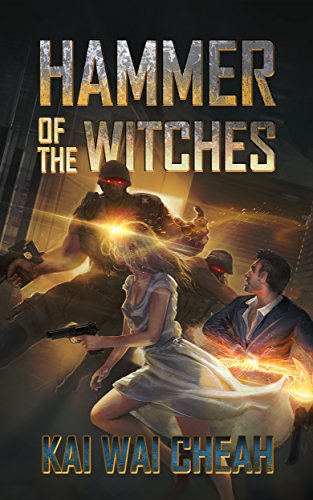 The terror is daimonic. The sorcery is real.

But enough bullets will kill even the most dangerous supernatural operator.

HAMMER OF THE WITCHES is the second volume of The Covenant Chronicles, the supernatural Mil-SF series by Kai Wai Cheah, Hugo-nominated author of Flashpoint: Titan.

Hesperians loved to see themselves as the good guys fighting for the underdog against powerful foes. If he ever caught a glimpse of what she really thought and felt, he would abandon her in an instant. And Hexenhammer would be finished.

Pausing at a streetlamp, she smoothly spun on her heel and powered her holobuds. In her peripheral vision she checked for unwanted attention. Notifications flooded her screen. She checked the first.

She blinked and followed the link.

A barrage of photos: first responders tending to the wounded and evacuating civilians, burning and collapsed tents, killers machine-gunning a crowd of innocents.

And in the news summary, a bold bullet point stood out.

She fought down a curse and read the entire article. Three times.

Terrorists attacked a refugee camp on the island of Chios. Hundreds dead. Between four to eight terrorists. Killers still at large. Island on lockdown.

Eve forced herself to breathe. It was time to be her other self again: an arm of the anonymous Kraken who terrorized the terrorists. A woman who brought down the hammer on the witches plaguing Pantopia. She opened her secure mail app and fired a message for Luke.

You must have heard about Hellas. We did NOT do it. We must meet. Call me.

“Why? Because she told you?” Pete said.

“No. Because this doesn’t have the hallmark of a Kraken operation, much less Hexenhammer.”

O’Connor’s voice issued from my holophone sitting on the table, reverberating in the secure conference room. “Just so we’re on the same page here, what is the hallmark of a Kraken operation?”

I rubbed my eyes. It was half past three in the morning, and despite the adrenaline in my veins, I was still jet lagged. I paused for a breath, composing my thoughts.

“Hexenhammer prides itself on proportionality and precision. They conduct information warfare and propaganda campaigns against their ideological enemies. They only target gangsters and terrorists—people who’ve caused actual harm—for assassinations. They’ve got a high standard for selecting targets. They post the target’s details on their internal forum, they talk about it among themselves, and they only go ahead if an admin is satisfied the target meets the standard of harm.”

“When they do strike, they rub out only the target,” Pete said. “No one else, except maybe nearby bad guys. And they attribute the hit to a mysterious figure they call Die Kraken.”

“Exactly,” I said. “They don’t kill innocents. They never had. Why would they start now?”

“To ‘strike a blow against the forces of globalization and Wahism threatening Western Phosterian civilization,’” O’Connor replied. “Or so their manifesto goes. They left it at the scene and mailed copies to the press.”

“You mean Eve doesn’t think like that. It doesn’t mean others in Hexenhammer don’t. Hexenhammer isn’t necessarily a monolithic organization.”

“Maybe they are changing how they do things,” Pete offered.

“Without telling their founder?”

“Or maybe Eve just didn’t want to tell you.”

“That’s not Eve,” I said. “She’s a killer, but she’s surgical. This? This is mass murder. She’s not psychotic enough to even think about it.”

Pete crossed his arms. “Okay, so who did it?”

“We’re going nowhere with this,” O’Connor declared. “It’s hasn’t even been an hour since the attack. Until we know the big picture, we can’t say for sure what’s going on.

“How about this: I’ll fly out to your location. I should be there in… twelve hours. By then I should have more to share with you, and we can plan our next step.”

“Consider this a warning order. We need to figure out what’s going on with Hexenhammer. Get ready for an overseas trip to meet and assess Eve and the rest of Hexenhammer.”

“All right. And the Kalypso readiness report?”

Pete groaned. “You just had to ask, didn’t you?”

No point going back to bed. Pete went off to collect coffee. I re-read Eve’s email. At the end of it was a phone number. Knowing her, it was a disposable one-time-only number. I generated my own burner number with a holophone app and called her with it.

She picked up after the first ring.

It was Swiss German. My language implant kicked in, returning Hello.

“Hey,” she said, switching to Anglian. “Thanks for calling.”

“Thanks for reaching out to me. What happened out there?” In the background I heard a car honking. Was she out on the street?

“I don’t know. I didn’t authorize what happened at Hellas. Neither did anyone I know in my organization.”

She was deliberately being vague to avoid tripping telecom intercept programs—the kind every First-World nation ran on the rest of the world.

“That’s not much for me to work with.”

“You can’t prove a negative.”