An Excerpt from HYPERSPACE DEMONS 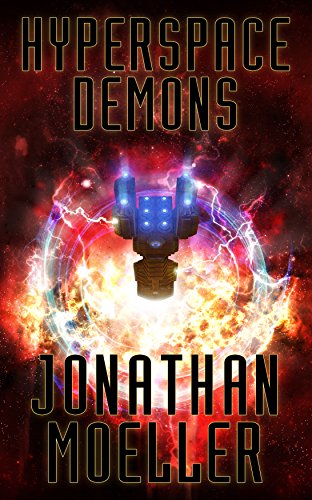 In space, the demons can hear you scream.

Space travel has always come with risks. But hyperspace travel comes with one particularly frightening risk, namely, the non-corporeal dark energy-based macrobiotic entities that inhabit the void and are drawn to the presence of human minds. Once penetrated by a macrobe, the infected human mind rapidly devolves into raving insanity, which usually presents in a homicidal manner. Fortunately, hyperspace-capable ships are protected by a dark energy resonator that keeps the macrobes away and thereby permits safe interstellar travel.

But what happens when a ship’s resonator is sabotaged while it is traveling through hyperspace? And who would be so insane as to unleash a demonic infection of mutating madness on an entire ship’s crew?

Jonathan Moeller is one of the most prolific self-published authors of writing in science fiction and fantasy today. He is the author of THE GHOSTS, DEMONSOULED, FROSTBORN, THE TOWER OF ENDLESS WORLDS, THE THIRD SOUL, CLOAK GAMES, and THE SEVENFOLD SWORD series of fantasy novels.

HYPERSPACE DEMONS is available at Amazon.

“What’s our status, Commander?” said Torres. “Don’t know yet,” said Malcolm, punching for the intercom. “Barson? Report. If you can hear me, report.”

Silence. Which meant the explosion might have damaged the pilots’ cabin, perhaps even wounded or killed Barson.

“You really had better hurry,” said Elizabeth, looking towards the pilots’ cabin.

Torres shook his head. “My men!”

“You’ll do them no good if you blunder into a hull breach or die of radiation poisoning, Captain, and you can believe me, that is a very bad way to die,” said Malcolm. He keyed open the door to the corridor. It hissed open, and they saw that the short corridor toward the cabin was undamaged. “From the pilots’ cabin I can control the entire ship and find out what the hell is going on.”

“The hyperdrive,” said Moth. The boy was clearly terrified, but he was doing a good job of holding himself together. “What about that?”

“Should be all right,” said Malcolm, reaching out towards the panel next to the door to the pilots’ cabin. “We know both the drive and the dark matter reactor are still online, otherwise we would have come out of our tunnel early, our atoms would have been scattered across several billion square parsecs, and we wouldn’t be having this conversation.”

He slapped the panel. The door slid open, and the thing that had once been Barson turned in its acceleration couch. The worst thing about it, Malcolm found himself thinking, was that it still had Barson’s face.

The misshapen creature filled the co-pilot’s couch, its sides overflowing the edges. Its hide was a combination of taut, wet leather and armored scales, glistening in one place and jagged in another. A dozen segmented tentacles rose from its sides, coiling and uncoiling in rhythmic patterns. Barbs jutted from the tentacles, and each one terminated in an unblinking, blood-red eye. Barson’s head twisted around, his eyes glowing with an inner blue fire that held nothing human behind them.

The soldiers froze. They might have been veterans, but the first sight of a macrobe-infested human was always shocking. “Flesh!” shrieked Barson, his mutated bulk rising from the couch. “I see now! I see the goat of a thousand eyes, the choir of a thousand screams! Can you not see the truth as well? Reality is written in smoke! Causality shall be rearranged, and we must kill, kill, kill–”

Malcolm drew his sidearm, aimed, and squeezed the trigger. A ball of superheated plasma slammed into Barson’s forehead, turning the front of half of his head into smoking char. The creature shuddered, its tentacles going into a wild dance, and Malcolm fired three more times in succession. The plasma bolts reduced Barson’s head to a charred stump, and the creature went limp, its tentacles falling loose to the floor.

The stench was terrible.

That broke the silence. Torres, Carvey, and Reader all began talking at once, and Torres stepped forward.

“Shut up and stay where you are!” said Malcolm. “For God’s sake don’t take another step.”