An Excerpt from THE HERETICS OF ST. POSSENTI 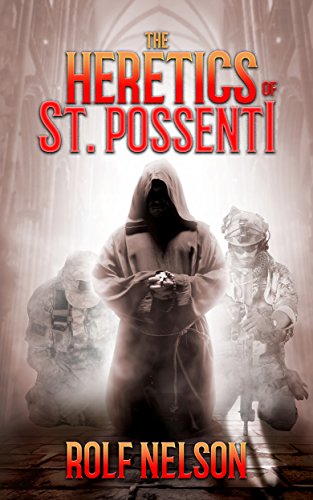 In THE HERETICS OF ST. POSSENTI, Bishop Thomas Cranberry finds himself at a loss when he is confronted by a thief and realizes some disturbing truths about himself. The experience sends him in search of the men who are increasingly absent from the Church, who find themselves at a loss in a world that has gone increasingly feral, and who feel that they have nowhere to go and no one to whom they can turn for support. In listening to them and attempting to understand their plight, he finds an unexpected mission.

A new monastic order requires a new monastery, built by the hands of the brothers themselves. Despite proper care and instruction, accidents still happen. Two monks accompany an injured brother to the emergency room and are forced to confront the evils of the world outside their cloistered refuge.

The ER waiting room was not crowded. There were just three other people waiting. Brother Hugh sat, slightly self-conscious about his habit and appearance, reading one of the magazines while he waited for a progress report. Alan was in with Tim and the doctor. He heard the argument before he saw them walk in. A Hispanic couple—well, a pair who were Hispanic and side by side anyway—were arguing loudly in Spanish as they entered, she very visibly pregnant and apparently in labor, he very angry and animated. It was unclear what exactly they were arguing about, but it didn’t appear to be joy and the impending need for a new name in the family.

Hugh kept an eye on them while pretending to continue reading. The receptionist picked up the phone. The couple kept arguing. When an orderly showed up and tried to speak with them in Spanish, attempting to calm them down and understand or defuse the problem, the man only got more animated.

The receptionist made another phone call.

The argument got worse, and the woman sitting down and panting hard while a contraction hit didn’t make it get any better.

Two more orderlies showed up. So did a knife in the hand of the Hispanic man.

One of the orderlies dodged a slice by his attacker, tripped backward over a coffee table, and nearly landed on Hugh.

Hugh put on his best pissed-off sergeant face, stood up, feet apart and arms akimbo, and glared at the unruly assailant. Suddenly, the woman’s argument prominently featured the words dios, sacerdote, and monji. The young man continued screaming and waving the knife around. The orderlies all backed off. The receptionist was talking urgently into the phone. The knife wielder made as if to threaten the woman with it.

Hugh took a step forward and went into a more combative stance. “Kid, put that damned cuchillo away NOW because if you hurt her or I have to take that pig sticker away from you, I swear to God I’m tempted to rip your arm off and beat you half to death with the bloody stump!” His tone said he meant it. He pulled one hand inside the sleeve of his robe, ready for action.

The pregnant woman looked aghast. Her boyfriend slashed at the bigger man, who dodged it. Slice, slash, short stabbing motion; side-step, block, dodge. The smaller man started coming after the monk more aggressively but still took a swipe at anyone else who got too close. He was as quick as Hugh, but much less disciplined and much more erratic. Hugh could feel the blade contact lightly a couple of times, but felt no bite of cutting pain or changes of motion, only the barely noticeable sting of impact.

His opponent made a leap and a stab. Hugh trusted the material of the robe, deflected the blade slightly, and grabbed the man’s arm with a pull, twist, and trip. He put on a vicious arm lock as they went down together. The knife was still in the man’s hand, but at a totally useless angle, with Hugh in total control of the arm as he lay atop the struggling man, putting gradually more and more pressure on it. The orderlies saw the knife was captive, so they joined in to pin the kicking legs, using their knees, the violent man’s pressure points, and leverage to render him nearly immobile except for his incoherent screaming. But the man still held the knife and tried to struggle. Hugh and the orderlies didn’t even try to talk to him.

Working carefully, Hugh adjusted his grip slightly. With a wad of his robe protecting his hand he gripped the knife blade and twisted it out of his opponent’s hand and tossed it aside. In spite of being disarmed, the hostile man continued to fight a losing battle until a pair of police officers ran in and added an additional two pairs of hands, cuffs, and pressure point activations to get a reasonable level of compliance. While that was going on, the pregnant woman was whisked off in a wheelchair to a safer, quieter delivery room.

After they secured the shackled man in their cruiser, the two officers returned to take statements, starting with the receptionist who had called them, and then the orderlies. When they got to Hugh, who looked to be unconcerned with it all and was back to reading a month-old Popular Mechanics, the two policemen wore somewhat amused expressions.

“What they said,” he looked toward the admissions desk. “The guy and his squeeze came in arguing. Orderly came in to ask questions and calm him down. The guy pulled a blade. One of the hospital guys nearly landed on me trying to save his own neck, so I figured it was time I did something. I got up and hoped the habit here would get through his drug-haze. Didn’t work, and he threatened the girl, so I told him to knock it off. He tried to stick me. I blocked it and dropped him, and then the orderlies piled on and helped keep him down until the cavalry showed up to take him away. And we all lived happily ever after.”

Gonzales chuckled at his wry description.

“Did you get cut when he took a poke at you?”

“No, don’t think so.” Hugh did a quick check just to make sure. “Yep, blade missed me. He wasn’t particularly fast as I recall.” He didn’t say anything about the material his robe was made out of.

“Do you remember what you said to him?” asked the second officer. “Not exactly.”

“What the receptionist said you said didn’t sound very… priestly.”

“Yeah, well, I’m kind of new to all this. Less than a month, in fact. Spent a lot of time in a different uniform. Wasn’t working out. Old habits die hard, you might say.”

The three spent the next fifteen minutes going over details, his contact information, and all the normal things that a police report has to have.

They were wrapping up when Brother Alan showed up. “I hear I missed some excitement.”

“Likely be okay. Gave him some more meds to help the swelling and reduce his blood pressure a little bit. Nothing broken in his thick skull. Hey, mind going in there for a minute? The young lady who came in a little bit ago wants to see you.”

“Yeah, you know. The preggers chick… I mean, the gravid Hispanic female whom you saved from her hopped up insignificant other.”

“Why? I mean, why would she want to see me?” Hugh noticed the police officer’s expression. “He’s new to the monastic thing, too. Still working on proper etiquette.”

“Dunno, hoss. She seems to have a child now, and I don’t speak Spanish, but it sounded like she wanted your blessing or something.”

“Well, you are of the cloth, now, Brother Knife-Meister,” reminded Alan.