An Important Predecessor to Pulp, Fantasy, and Science Fiction: The Ruritanian Romance 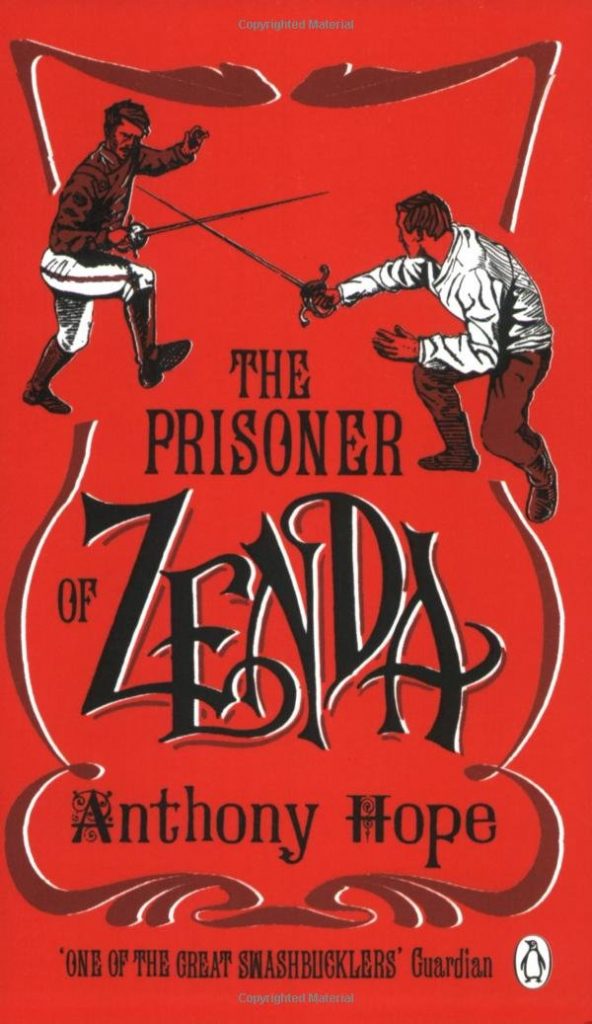 I first came across the Ruritanian romance, a genre featuring adventure in a small, fictional, usually European kingdom, in Nabokov’s Pale Fire.  While that version was decidedly un-heroic, as Nabokov’s tragicomic works tend to be, it still impressed me as a promising setting for a story.  Later, in Philip Jose Farmer’s Tarzan Alive: A Definitive Biography of Lord Greystoke, it was extensively referenced and analyzed, evidence of the effect it had on Farmer.  It wasn’t until years later that I finally read Sir Anthony Hope’s work that introduced the genre, The Prisoner of Zenda.

And it didn’t disappoint!

Rudolf Rassendyl is a lazy, financially secure English nobleman who is a distant descendant of Rudolf III of Ruritania, possessing the red hair and looks of the Elphberg royal family. On a whim, he decides to visit Ruritania, and in the small town of Zenda, comes across distant relative Rudolf Elphberg, who is to be crowned king the following day. Elphberg remarks upon their uncanny resemblance and decides to celebrate the occasion, making the mistake of drinking a wine sent to him by his jealous brother Black Michael, the Duke of Streslau.

With him in a drugged sleep, and the coronation in only a few hours, the canny Colonel Sapt and loyal Fritz von Tarlenheim convince Rassendyl to shave his beard and assume the mantle of monarch.

Thus, a dangerous rivalry ensues between Rassendyl and Black Michael, with the beautiful Princess Flavia flung into the mix.

While there is a mild amount of romance, the book primarily concentrates on action. It has a furious pace, and every new chapter involves dastardly plots, gun shots, murder, and/or swordfights.

Hope creates a solid cast of characters for his tale. Rassendyl, unlike most idealistic heroes of the Victorian era, has no compunction about plunging his sword into the back of a murderer or thug simply because it doesn’t constitute “fair play”.

Nor is Rassendyl above temptation. Throughout the book, he struggles between his sense of honor and loyalty and his love of Princess Flavia and the throne, in that order.

And while Rassendyl is brave and kills several foes, he is far from superhuman. In fact, two enemies that are part of Black Michael’s minions, known as “The Six”, are clearly stated to be superior fighters.

All this made the central protagonist more relatable and interesting, as opposed to being the artificial, unnatural paragon traditionally found in Victorian adventure novels, and even some of the pulps of the 1910s and 20s.

Two other characters are also noteworthy.

Colonel Sapt is a cagey, roguish adviser who is not above certain unethical suggestions in his role as Rassendyl’s primary minister. At the beginning of the work, he encourages Rassendyl to assume the throne solely because he hates Black Michael, and fears what will happen to him if the latter becomes king. But as the work progresses, he gains a growing admiration, and eventual love and devotion for Rassendyl. He laments that Rassendyl is not the legitimate king, and notes that he is the “truest Elphberg”.

The other character is one of Black Michael’s The Six, who was popular enough for Hope to adorn the sequel with his name, Rupert of Hentzau.

Rupert is a beautiful, dashing villain whose bravery and sword-fighting is utterly unmatched. He attacks his enemies in broad daylight with nothing more than a sword, even when a dozen servants surround his target, bearing firearms. All the while, he is supremely confident, with a smile and joke always ready on his lips.

His boldness and humor can be seen in many of Sabatini’s protagonists, albeit employed in nobler pursuits. In 1894, I can well imagine that such a character, even as an antagonist, was unique.

This fine adventure, with its fantasy-like setting, imperfect protagonist, and colorful cast of characters, was an obvious inspiration for Farmer, Sabatini, Sax Rohmer, and Edgar Rice Burroughs, the last of which even wrote his own Ruritanian romance in 1914, The Mad King.

In the interests of full disclosure, I must note that the sequel, Rupert of Hentzau, published 4 years after the original, is a disappointment.  While not altogether bad, it suffers from a dearth of ideas that were so plentiful in the original.  Moreover, the titular antagonist is less interesting, in part because despite moving into a main role, nothing is added to his character.  And the climactic duel between Rassendyl and Rupert ends with a whimper, instead of a bang, opting for a simple, unimaginative solution.

Nevertheless, the original is a classic tale of derring-do with considerable influence on later genres.  I highly recommend reading it if one hasn’t.