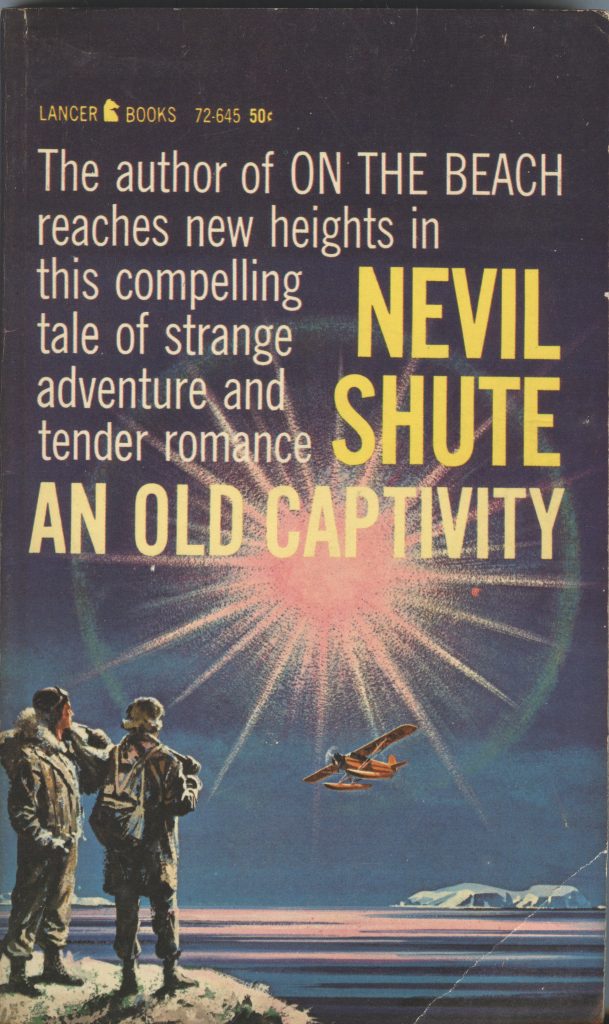 Racial memory/ancestral memory/genetic memory– a concept used in fiction for fantastic effects for 140 years. H. Rider Haggard used the idea in The Ancient Allan, Jack London in The Star Rover, Edwin Lester Arnold’s Phra the Phoenician, and Robert E. Howard’s “James Allison” stories. Someone in the present remembering a past life of an ancestor.

Ancestral memory is in Nevil Shute’s An Old Captivity. Shute (1899-1960) is probably best remembered for the apocalyptic On the Beach and A Town Called Alice. An Old Captivity is my first novel by him to read. He was a popular writer of mainstream adventure tinged novels. He had a background in aeronautical engineering (like L. Sprague de Camp) and it most definitely shows in An Old Captivity.

The novel was published in 1940 but set in the early 1930s. Half Scot-half Irish Donald Ross is an unemployed pilot, late of the Royal Air Force. An Oxford professor, Cyril Lockwood, hires him to fly to Greenland on an expedition. Lockwood is investigating Norse ruins on the west coast of Greenland.

The first portion of the novel contain the details of getting financing, ordering a special made plane, getting it ready. There is also a plot of dealing with Lockwood’s daughter, Alix, coming along as a helper for her aging father. There is a romance element in the novel. Ross and Alix don’t like each other at first but she undergoes metamorphoses of spoiled brat to capable woman.

I learned more than I ever thought I would about early airplanes. Shute details navigation and way too much space on refueling the tanks with hand pumps on the various stops in Scotland, Iceland, and Greenland.

The novel gets the fantastic element about three quarters of the way into the novel. Ross is physically and mentally exhausted with the rigors of flying and plane maintenance. He gets addicted to some sleeping pills he picked up in Iceland. He ends up hallucinating from the pills and exhaustion. He dreams he is Haki, a Scottish thrall of the Norse. He and the female thrall, Herja, are taken with Leif Ericson to Greenland and then to Vinland. Haki and Herja escape the Norsemen to live out their lives in Vinland.

The novel ends with Ross and company landing in Cape Cod. He goes to a spot finding a runestone left by Haki and Herja. Donald Ross and Alix Lockwood are reincarnations of Haki and Herja.

The novel was not blood and thunder in any way but an enjoyable adventure novel. I lucked out in finding the Lancer paperback edition the end of last summer on a trip to Kinsman, Ohio of all places. I did pay respects at the graves of Edmond Hamilton and Leigh Brackett at the Presbyterian cemetery when there.

An Old Captivity is another entry into the ancestral memory fiction list. It was a plot used in fantastic fiction at one time.