An Overlooked Gem: “The Green Odyssey” by PJ Farmer 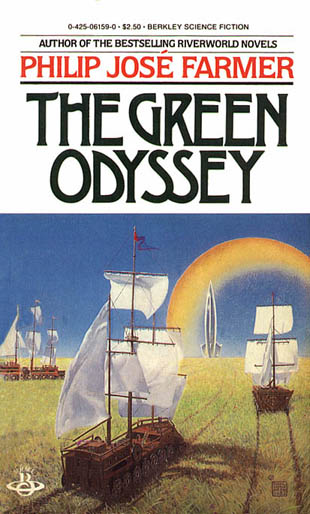 The best cover I could find!

Late one night last year, I was looking for a new book to read and discovered that there was another work by PJ Farmer added to Project Gutenberg, The Green Odyssey.  A few hours later, I had finished a swashbuckling classic, a full-blooded adventure to rank with the best of Howard, Stevenson, or Sabatini. And yet, this book is almost completely unknown today!

The book features a distinctly Farmeresque setting; a fantasy world brimming with action that features science fiction explanations and details as one delves further on.  Alan Green, a member of an advanced space-traveling civilization, crash-lands on a primitive planet and is taken as a slave.  Society resembles that of a medieval Europe, but with key differences in laws, economy, and ecology.  While not known for this trait, Farmer demonstrates excellent world-building.  He even shows a deft touch in explaining how Green learned the local language so quickly, and how he avoided being wiped out by native diseases.

Life for all but the elite of this world is nasty, brutish, and short.  The peoples are a vulgar, violent sort, and bloodshed common. Green finds himself serving the local duke and having an affair with the duchess, which is a part of the kingdom’s tradition and known to her husband.  The latter is more taxing than anything, as Green has to not only perform to her satisfaction, but attentively listen to her drone on for hours after sex!

Green must also faithfully serve the duke for all his waking hours, and never enrage or upset him in any manner, while avoiding the vicious fangs of the household dog.  Getting only an hour or two of sleep a day, Green is nearing a complete physical breakdown that can only end with him slipping up and being executed, as his predecessors have.

Luckily, Green hears from the court that a bizarre flying object from outer space has landed near the capital, and its alien beings captured!  It’s a real opportunity to meet fellow advanced humanoids and, with their piloting skills, get off this accursed planet!  However, Green must hurry, because the planet’s priests intended to execute the interlopers by the end of the month.

There is another complicating factor.  Green, as expected of him in society, has married, and it’s to the beautiful, haughty, domineering Amra.  He even has a child with her as well as a slew of step-children adopted from her past marriages (another peculiarity of this society) with whom there is a mutual fondness.  He will have to abandon them and escape the kingdom without being detected by the duke’s men or his wife!

Everything I just described is encapsulated in the book’s beginning.  What follows is a breathtaking adventure, with one heroic, exciting action scene after another.  Whether it’s a duel with a pirate on the top of the mast, escaping the duke’s castle and battling his men, surviving an attack by cannibals, or exploring ancient, secret tombs, it’s chock full of excitement and wonder.  The book’s central image, that of a rolling pirate ship moving across a wild, savage plain, is pure majesty.

Green is an interesting character.  He is not a natural hero; before he was wrecked on this planet, he was a mere scientist, not a soldier or space explorer.  However, he demonstrates a resourcefulness and cool under fire throughout his adventures that has him eventually attaining the mantle of a true hero.

I was also astonished at how well the novel succeeds at romance.  At first, one believes that neither Green nor Amra care for one another.  She only likes him for his status and providing for her kids. He doesn’t care for the domineering bumpkin beauty at all!  And yet, as the book goes on, one finds this isn’t the case.  This is revealed deliberately and subtly, effecting a gradual change in the reader’s perception. Amra helps and even saves Green from the death, revealing there is more to this simple woman than meets the eyes.  She does this in cases where it would be easier and more advantageous for her to abandon him.  Ultimately, one realizes that as much as she yells and demands of him, Amra deeply loves her husband.

And in a surprise to both the reader and even himself, Green discovers at the very end that he too loves Amra.  The feeling strikes one as organic and meaningful.  This is rare enough in dramas, let alone science fiction adventures!

If you have any doubts about the quality of this outstanding work, consider its condemnation by our favorite science fiction hack, Damon Knight;

“pastel pastiche, superficial and generic, of Tarzan, Conan, […] and heaven knows what else”

If that doesn’t convince you to give the book a shot, I don’t know what will!