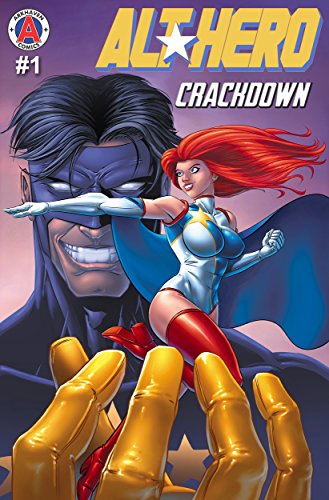 Alt★Hero #1: Crackdown is now available on Amazon for Kindle and Kindle Unlimited.

When Captain Europa offers Janelle Jeanneret a recruitment deal she can’t refuse, the French model doesn’t hesitate to sign up with the Global Justice Initiative. After all, they’re providing her with a killer apartment in Brussels, a new outfit, and even a flashy new name, in addition to paying her an awful lot of money… and it’s even tax-free! But is there a catch? And how is a group of superhumans based in Europe going to go about establishing global justice anyway?

Alt★Hero is the first in an exciting new line of superhero comics from Arkhaven Comics.

We anticipate getting the French, Italian, and German digital editions out next week, after they go out to the backers. The Comixology edition should be the week following, with the limited edition gold logo print editions being published the week after that. The foreign language editions will also be published in print.