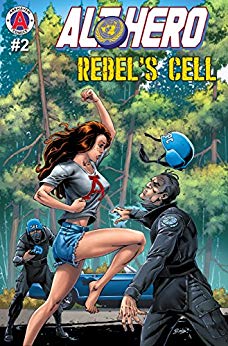 It was only a matter of time before the mysterious man hunting illegal immigrants and turning them over to the local Immigration and Customs Enforcement office was identified. And after Michael Martel is informed that the Antifa leader he beat up is the son of a powerful state politician, he knows he has to make himself scarce in a hurry. Fortunately, the man who has been stalking Martel has need of someone who won’t hesitate to punch first and ask questions later in order to free a young woman who has been taken into custody by the UN’s Superhuman Protective Council.

In addition to 24 pages of pure graphic storytelling, the digital edition also features ads for Arkhaven, Quantum Mortis (including Wardogs Inc.), and the Arkhaven line from Crypto.Fashion. It also includes what we hope will be a regular feature, which is an example of Alt★Hero cosplay.