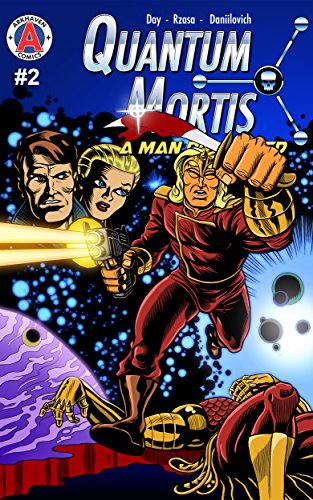 Arkhaven Comics is very pleased to be able to announce that QUANTUM MORTIS A Man Disrupted #2: Zero Zero Tango is now available for Kindle and Kindle Select.

Chief Tower and Detector Derin Hildreth of the Trans Paradis Police Department are investigating the murder of the Crown Prince of Morchard on the shadowed streets of Trans Paradis City, but the alien government-in-exile is less than entirely helpful. The royal house of Morchard appears to be considerably more interested in seeking revenge than seeing justice done. But there is no way that Tower or MCID are going to let any vengeful xenos start another war in their house!

QUANTUM MORTIS A Man Disrupted #2: Zero Zero Tango is 27 pages, retails for $2.99, and is available via Kindle and Kindle Unlimited. Matvei Daniilovich is still the illustrator, but starting with this issue, we arranged to get him a professional colorist in order to move from a bi-monthly release schedule to what we hope will be a monthly one, so you may note that the colors are a bit more vibrant in this issue. UPDATE: Look Inside is now enabled, so you can see these for yourself.

From the reviews of Quantum Mortis A Man Disrupted #1: By the Book:

A print edition of issue #2 will be available in a few weeks in a gold logo edition.
Tags:Arkhaven New Releases, Quantum Mortis