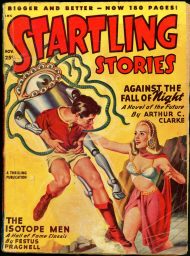 You know the type. It’s the kind of story that takes a crazy, dream-logic premise and runs with it. The most famous example is “Scanners Live in Vain” by Cordwainer Smith. “Martel was angry. He did not even adjust his blood away from anger.”

And then there’s “Humpty Dumpty Had a Great Fall” by Frank Belknap Long. It was published in 1948, five years after “Mimsy Were the Borogroves” by Lewis Padgett, which it resembles, but surpasses for sheer weirdness. The premise is that the Mother Goose nursery rhymes were inspired by a vision of a pocket universe inhabited by bizarre, cryptic, inexplicable clockwork creatures, who engage in an endlessly repeated cycle of cruelty and violence.  As a young reader, it introduced me to the idea that parallel universes might operate by their own laws of physics and logic. (And it wasn’t even the cover story!)

The third example is a story whose name I can’t recall, but I’m pretty sure it was by A.E. van Vogt. It’s about a cabal of supermen who keep their organs separate from their bodies, in elaborate life-support chambers. Why do they do this? Because it allows them to control a mysterious form of energy that is the source of their powers.  It’s a familiar concept in folklore (The Golden Bough has a whole chapter on “The External Soul”). The story replaces the magical explanation with a scientific one, and make it more weird in the process.

This kind of story seems to belong exclusively to the late pulp era. It requires a certain primitive, naive, un-self-conscious energy to pull it off. There’s nothing like it after 1955 or so. How the heck do you write this kind of story in 2017? I’ve gotten close a few times by using images and phrases that came to me in dreams.

I’ll post more examples as I think of them. Feel free to add your own in the comments.  If anyone knows the name of the third story, please post it.