“Bull Run, while comparatively disastrous as a battle-field, was a grand success to the North in other respects.  It sobered, for a time at least, the hasty reckless spirits who believed that the South would not fight, and who were so unceasingly thorning the President to immediate decisive action.” – Cpl. John D. Billings, Hard Tack & Coffee: Soldier’s Life in the Civil War. 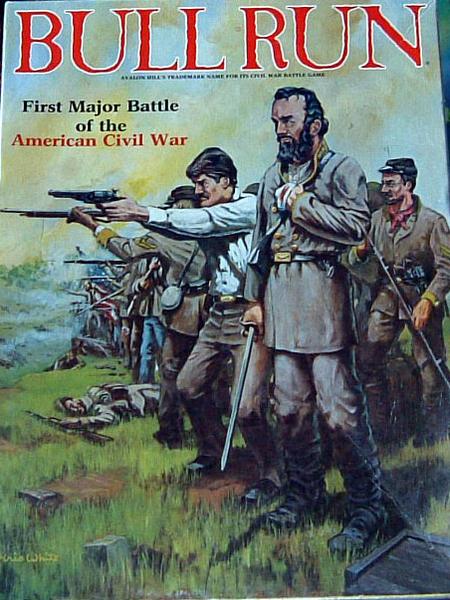 My dad broke my winning streak recently with Avalon Hill’s Fortress Europa, first managing to eke out victory in the final turns by stalling the Allied advance and then, in our second playthru, by pouring all the might of the British and American forces into Holland so as to get a direct shot into Germany. I’d bought a handful of Avalon Hill games from a local thrift store to choose from once we’d each played once as either side on Fortress Europa; it was just my luck that my dad already had Air Assault on Crete and War and Peace, but he’d not seen Avalon Hill’s Bull Run before and was hot to try it out, particularly since he’d had a chance to revisit the battlefield over the summer.

Bull Run has something of an almost mythic place in American military history. Not only was it one of the first “real” battles of the Civil War, it was one of the first real battles faced by an entire generation; the War of 1812 was in the distant past, and the Mexican-American War may as well have been fought on the moon so far as most Americans were concerned. Many had a rather Pollyanna view of war and battle, and the assumption was that the mustered Union men could put a swift end to the rebellion with a few volleys of musket fire. Yet it was not to be, and the stories of the wealthy Washington picnickers come to watch the rebellion be crushed only to fall afoul of the Union retreat have fallen into legend.

Avalon Hill’s Bull Run takes a very ambitious approach in attempting to recreate the chaos of that day’s battle. The game is handled on a narrow scale and relies on a hierarchy of leaders to activate units in a chain to represent the flow of command and orders through the troops. Since the turns are played out in 30 minute increments beginning at 9 in the morning to 8 at night, supply rules are moot; instead to act, units must be near enough to a leader to either receive marching orders, be led by a ranking commander into battle, or be close enough those damn yanks/rebs that the captains and colonels can figure it out for themselves. Some troops and leaders are ‘self-motivating’, meaning they can move or issue commands on their own, while others must be able to trace a line to leaders or be stuck and ‘without orders’. To reflect the confusion within the Confederate ranks (lost orders exacerbated by a combined Army of the Potomac with the Army of the Shenandoah that had not integrated their command structures), the majority of the Confederate units are “frozen” until mid-morning.

The game simulates the battle at the regimental level (meaning each piece represents between a few hundred to around a thousand men) with each hex representing approximately 1000 feet. Each regimental piece is grouped into their brigade, but wait! There are also brigade pieces? This puzzled my dad and I at first, since while the “brigade” counters were more powerful than any one regimental counter, they were not always as strong as the sum of the brigade’s value. It turns out these represent the coordination between stacked infantry in the same brigade to act as a single more powerful unit that can later be broken down either voluntarily (leave a regiment to hold a hill/road/whatever) or as the result of combat(one or more regiments break and flee while the others make an orderly withdraw).

Most of the crunch of Bull Run comes from the Command Path rules that dictate which pieces can and can’t move, the rules governing brigade structure, and the rules for artillery movement (which have both ‘packed’ and ‘deployed’ counters) and fire (support and bombardment). The rest of the system is a fairly straightforward system of modified odds rolls with a bit of nuance. To accommodate scout cavalry and packed artillery that have unit weights but not attack values, rather than use a single SP/Att system, units have an attack value AND a defense value to represent its unit weight for stacking purposes with each Defense Point representing around 300 men. Also, rather than use a system with flipped half-strength counters, or hinky all-or-nothing combat results, DP are used to calculate losses (based on the victor’s DP value) so you don’t have a tiny force annihilating a larger force on a crap roll.

Once we actually got everything set up, play moved a lot more smoothly than we expected. So far, Command Path has been less cumbersome than we’d feared. It mostly affects the Union army in their opening turns, as they start just far enough away from the inactive confederate unit that they need to be able to trace back to their brigade commanders who need to trace back to division commanders who need to trace back to McDowell (except for Heintzelman and Hunter, who are self-activating). The only issue I’ve had as the Confederacy was that I stuck Ewall on the wrong side of Bull Run (on the hillock just south of Union Mills), so he can’t receive orders from Beauregard. Once units are within “recon” distance (4 hexes), regimental officers know what to do and you no longer have to worry about Command Path. Once the fighting begins in earnest mid-morning, you mostly just need to keep an eye out for stragglers on the flanks.

My dad is taking a more or less historical approach to the attack as the Union, with the bulk of his troops going for my western flank, though he’s left some troops to try to create a bit of a stand-off near McLean’s ford. Evans got steamrolled by Sherman near Farm Ford, and I could not get Bee and Bartow to Matthews Hill in time to refuse my left flank. I don’t know that you can reasonably get Jackson to Henry House against an aggressive Union player unless you start moving him turn 1. The bright spots for me, though, are that my dad left the road to Centreville only lightly guarded (due in part to Jeb Stuart luring a few regiments to chase him back toward Island Ford), and a disastrous attempt to drive Longstreet back across Blackburn’s Ford left Wilcox’s entire brigade routed. Since Longstreet is a commander who requires orders, Jo Johnston will probably need to ride out with him, but he’s taking four regiments with him and is only about two hours march from the Union HQ in Centreville.

I’ve got to hand it to Bull Run: this game plays way faster and less clunky than it looks. The rules for calculating losses based on a separate defense stat really does wonders to solve that problem you have in some war games where a lousy roll means that a tiny handful of guys were somehow able to slaughter a significantly larger force to a man. We’ve only had a few engagements so far, but in game terms it meant that one regiment firing on troops (who were at a significant disadvantage for trying to cross a ford) was only going to cause one enemy regiment break and the rest to flee; much more reasonable than saying that a few hundred guys shooting from the trees were able to kill all twenty-five hundred men Sherman was leading across the stream. This is probably one of my favorite combat resolution systems I’ve seen for this scale.

Right now, I’d say that I’m loving Bull Run. It has a lot of nuance to it and incorporates some neat ideas without going so overboard as to make it unplayable. There may be some limit to the strategies one can employ based on the historical setup; the Union’s best bet is probably always going for the Confederate’s left flank, and based on their starting positions, the CSA player will have to immediately anticipate that attack and start moving Bee, Bartow and Jackson northwest on the first turn to keep Evans from getting overrun. This could easily be fixed, however, by granting the Confederacy a bit more flexibility in their starting setup. The Command Path rules may be confusing enough at first that they may frustrate a novice or first-timer, but all in all, I think that Bull Run would be a great game to play with beginner to intermediate wargamers. Best of all, my dad and I might be able to knock this one out in only two more sessions.