Avalon Hill’s The Guns of August 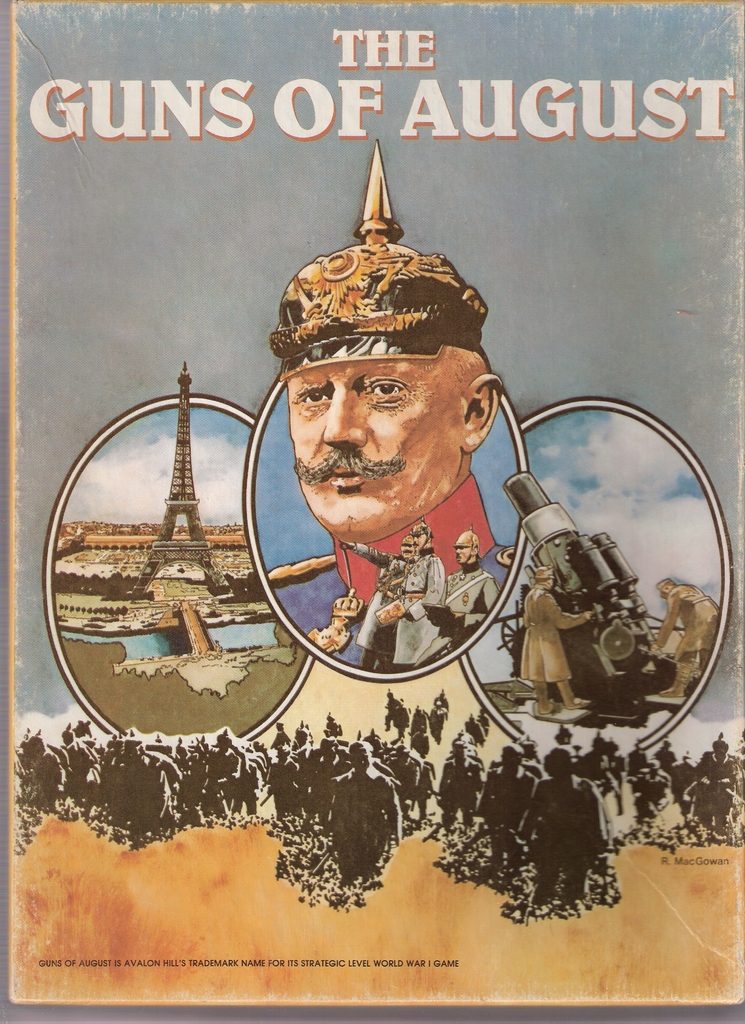 “For those who think that World War I is an unexciting subject for a game, GUNS OF AUGUST will prove a shock comparable to the appearance of British tanks at Cambrai, and German stosstrupen at Caporetto.” – The Guns of August, Box Text

Bold words, Avalon Hill. I was keeping my fingers crossed that a game as beautiful as Guns of August would live up to its claims of being a not-boring WW1 game. So far, I have not been disappointed. I know I’m going to have a hard time describing this, but largely because I am so overawed by its presentation.

The scope of this game is MASSIVE. Four map slats stretch from France and England to western Russia, Romania and the European parts of Turkey and allow for various scenarios on the Eastern Front or the Western Front throughout the course of the war. Of course my dad and I decided to start August 1914 and will keep going until the game ends or we burn out and one of us sues for peace.

Turn one setup literally has over 100 pieces of French, Germans, Austro-Hungarians, Russians, British and minor allies set up along the borders. To make things less cluttered (and implement fog of war if you really wanted to make things brutal) EACH FRONT has 25 Front Counters per side that can be placed on the map in lieu of the full stacks (up to 3 infantry + 1 cavalry + 1 artillery) which are set aside on the counter track.

Strategy in this game is very different from so many wargames I have played. Because basic units typically will have defense values of two greater than their attack value, amassing enough troops to get favorable odds is difficult; at 3-1, there is still a very good chance that you’ll get a ‘Both Demoralized’ result, meaning that several stacks of attackers could be demoralized to the defender’s one – ultimately a loss for the attacking player. But then I noticed something: with the exception of a 1 modified down to 0, the tables for 1-1 and 2-1 were identical and offer a better-than-50%-chance of AT LEAST getting a BD result! In Guns of August, the winning strategy is to scrape together mediocre odds, only attack with a fraction of your troops and send the fresh units into the gaps while both sides are running away.

So far, we’ve played from August 1914 up to April 1915, with my Dad as the Allies and myself as the Central powers. My strategy was to go with the original version of the Schlieffen Plan, going through the Netherlands and Belgium and then swing for Paris. Our first session was severely hampered by consistently rolling 1s and 2s, no matter which of the 6 dice at the table we rolled with. This was much worse for me as the aggressor, and my initial German assault quickly stalled out on the border between Belgium and France. I chose a strategy somewhat opposite from history and decided to stack a bunch of my heaviest hitters in the East to quickly deal with the Russians and then turn my attentions toward France; while there’s been some back and forth, and I’ve finally taken Poland by creating and crushing bulges. Also, the Austro-Hungarians have held out better against the Russians than historically and even pushed them past the border a bit. The Serbs have proven resilient, but once I figured out how combat works in this, I was able to use weaker infantry and quicker cavalry to get behind the Serbian units and force them to surrender – while my attackers from the north suffer demoralization and retreat, the Serbian units which were likewise demoralized were forced into the zones of control of fresh (not attacking) troops who had swung south and eliminated them. If I had done this earlier, I may have been able to put a swift end to the war in the south, but with French troops landing in Greece and Turkey and the Serbs dumping all of their replacement points into getting back the guys I’d finally killed, I won’t be able to deal with them before I have to pull a bunch of Austro-Hungarians to guard the border with Italy. But hey, I at least conquered Monte Negro and Albania!

There are a lot of variables and optional rules available in Guns of August, including naval stuff, if you’re willing to make your own counters for it, and we have used those that we’ve felt were reasonable (when we remember them). It looks like a typical wargame, and the mechanics are those of a typical wargame, but something about it feels very different when playing it. Lost units are easily replaced (at least early game), so there is a lot of push and pull and vying for advantageous positioning. It is like the difference between Chess and Shogi with its ‘drop’ pieces, only on a gigantic scale.

I don’t know if we’ll play the full war beginning to end, and I suppose if things get too grim and hopeless (like the possible collapse of the Austro-Hungarians, who will soon find themselves fighting on three fronts) we may decide to call it, but so far I am absolutely loving Guns of August. After Imperium and Napoleon’s Italian Campaigns, this has been a breath of fresh air that I’ve been totally enjoying despite lousy rolls and almost assuredly ‘losing’.