AWAKE IN THE NIGHT LAND 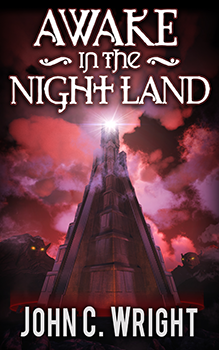 extremely pleased to announce the release of AWAKE IN THE NIGHT LAND, a collection of four novellas by John C. Wright set in the famous Night Land of William Hope Hodgson. It is not an easy book to categorize. Part anthology, part novel, it consists of four novellas that are tied together in one vast story spanning five million years. It is the masterful combination of three literary subgenres, SF, Fantasy, and Horror. AWAKE IN THE NIGHT LAND is set in the world first created in a novel published in 1912 and yet it is far more original than the vast majority of SF/F published in the last fifty years. It is remorselessly grim and set in a world more inhumanly horrific than anything you are likely to imagine, and yet it is an uplifting tribute to the unquenchable human spirit.

It is monstrous and glorious and ghastly and magnificent.

The verdict from the first reviewers is uniformly positive:

In addition to the Amazon link provided above, Awake in the Night Land is also available in epub format at Smashwords.