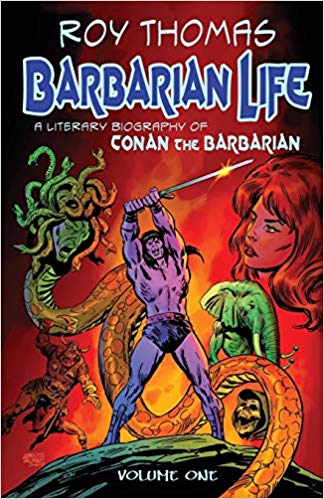 Thomas had originally wrote these entries for a Spanish reprint series in the 1990s. Thomas had not kept the original English texts, so these were converted back into English with some slight rewrite or correction by Thomas.

If you want to know about Conan the Barbarian in the early years, get this book. You learn all about interest in doing a Conan comic book after the paperback success of the Lancer paperbacks in the 1960s. I did not realize that Martin Goodman was still in control of Marvel comics. I am familiar with Goodman as a pulp publisher for titles such as Marvel Science Stories and Adventure Trails.

There is a lot of detail by Roy Thomas on writing his own stories that fit between the Robert E. Howard stories. The rise of Barry Smith is chronicled. The rough first few years where the fate of the title was not assured. Stan Lee is mentioned here and there.

I met Roy Thomas in Cross Plains at Robert E. Howard Days. He was a Guest of Honor and an engaging speaker. Some of this I knew but not in the detail that I know now.

One of the things I talked to Roy Thomas about was Gardner F. Fox. Fox is a guilty pleasure of mine. I have all his stories in pulp horror and science fiction magazines and even have a few western and sports pulps with his stories. I recently had an article on Fox’s historical novels in Men of Violence 11.

Roy writes about Gardner F. Fox as Roy adapted Fox’s Kothar and the Conjurer’s Curse for Conan the Barbarian issues 46-51. Kothar would adapt much better to Conan than Norvell Page’s Flame Winds, which I reread a couple of months back.

There is a lot of inside baseball going on, but you learn some things about comic book publishing along the way. I read this book during lunch over a couple of months. I found reading one to two entries at a time a couple times of week kept it from getting repetitive.

There would not have been any Conan movies if not for the Marvel comic book. This is a title that could have been horrible in the hands of a different writer and editor. Roy Thomas has a feel for adapting sword and sorcery to the visual form.

The book is in trade paperback format, a fitting cover by Benito Gallego. Cost is $19.95 through Amazon. There is a volume 2 covering the next 5o issues coming out, so stay tuned. 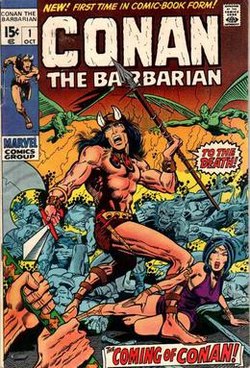