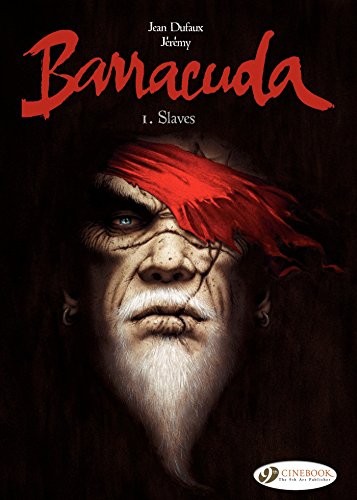 “No mercy! For anyone! Ever!”–Raffy, Barracuda Vol. 1: Slaves

When Captain Blackdog of the Barracuda seizes a Spanish galleon on the seas, he finds a map to the hidden Kashar Diamond, slaves, and his son Raffy’s defeat at the hands of the Spanish captain. Blackdog the arrives in Puerto Blanco to trade loot for provisions for a treasure hunt. Meanwhile, the slaves struggle in their new lives. Emilo, a servant, is saved from the worst depredations by dressing as fair Emilia–or as long as “her” secret remains so. Maria, however, finds her status as a nobleman’s daughter to be no shield, as she loses her freedom, her dignity, her mother, and finally her innocence in one harrowing night. Meanwhile, Raffy tries to do what is right by his father, but is wounded again when he attempts to help a scourged slave girl, and again when his father leave him behind.

“No mercy!” is the refrain of Barracuda Vol. 1: Slaves by Jean Dufaux and Jérémy, repeated again and again throughout its pages, its plot, and its art. For framed inside the search for hidden treasure is a story of how the brutality of piracy grinds down three young adults. Maria by far has the worst of it, sold, stripped, and whipped until all that is left to her is fury. No mercy was shown to her, and so she’ll show none. Mercy leads to Raffy’s woundings, as fate punishes his every deviation from a pirate’s ruthlessness with pain and harm. And Emilo is trapped in his petticoats, unable to show mercy else his secret be exposed. Each young adult hardens during his or her stay at Puerto Blanco, and must to survive. But Barracuda does not revel in their pain. Instead, it traps the trio into their roles. For while the ship Barracuda is away, a storm of intrigue will sweep over the cursed port.

I was sold on Barracuda at the first sight of its striking cover. And the pages within lived up to its promise. The character designs are clean and distinct, even when dealing with the rough wrinkles of aged men. Just like many of its contemporary bandes dessinées, Barracuda creates eye-popping effects with the color red. What sets it apart is that its blues and purples are just as vivid, allowing for just as much detail in night and shadow as in day.

Frankly, I found Barracuda to be intense and uneasy reading. Maria’s scourging is enough to sour me on future volumes. But I will give Jean Dufaux and Jérémy credit: they do not revel in shock factor. Maria’s ordeals are horrible ugly affairs in art and in story, as one would expect a slave auction and public flogging to be. Barracuda does not spare the horror of these dark events–or of the bloodletting elsewhere–but neither does it glorify the cruelty. Harm comes to all, but never in a gratuitous manner. But rarely cushioned either.

While I’d still take Barracuda over most American comics, whether or not you might like this depends on how much grim you like with your darkness.