Bottom line up front:  easy to learn, easy to play but with enough complexity to keep even hard core gamers engaged.  The scenarios, campaigns and force selection options will disappoint historical purists and the online player base seems small but despite that they are highly enjoyable games and I highly recommend them.

The series consists of the original Battle Academy (BA) covering North West Europe / North Africa and Battle Academy 2 (BA2) in which the action moves to the East Front.

BA is turned based and available for PC, MAC, iPad and X360.  Download retails for $9.99 while the boxed version plus the download goes for $19.99.  There are numerous expansion packs but I’d recommend getting the BA Mega Pack which sells for the same prices ($9.99 & $19.99) and contains Blitzkrieg France, Operation Sealion, Operation Market Garden, Operation Husky, Rommel in Normandy and Fortress Metz expansion packs.  A caveat is that, so far, the Mega Pack is only available in PC and MAC.  Individually, these expansion packs sell for $4.99 and $14.99 so it is a deal.  In fact, I spend most of my time on BA2 and only found out about the Mega Pack when researching for this review but it looks like Ye Olyde School will be heading back west pretty soon…

The newer BA2 retails for $24.99 / $34.99 and is available for PC, MAC, iPad and Android.   At this writing only one expansion has been released covering Kursk ($19.99 & $29.99) but I expect more to follow.  As mentioned above, I spend most of my time playing BA2 but am a little disappointed that the Axis Minor allies are neglected.  A modder created a scenario with some Romanian infantry but hope a future version has a Winter War campaign with some Finnish ski troops or a Hungarian campaign in which I can command Toldi and Turan tanks against BT-7s and fight off the superior T-34s.

Each infantry unit represents a squad while AT guns and tanks are an individual piece with crew or single vehicle.  The usual map sizes and available force selections for the stock scenarios range from company level combat all the way up to the battalion level (though game play does consider unit organization).

Linked campaigns for the solo player are available while those wanting to play a human opponent can easily find opponents using the multiplayer mode which uses Slitherene servers to store the latest turns.   I consider this as one of the series’ strongest features and have enjoyed exciting matches with gamers worldwide.  For those that have played games sending turns attached to an e-mail you’ll find that the Slitherene “PBEM” system is superior.  No more wondering if your opponent replayed his turn a few times.

My first attempt at a Ye Olyde School game rating system on a 1 (terrible) to 5 (excellent) scale:

Ease of Learning – I’ve never read the rule book but easy to download the manual in .pdf format.  Tutorial scenarios and just jumping in are viable options for the experienced gamer.   Those new to gaming should be fine following the tutorials.

Playability – It’s fun.   A few scenarios require a set up turn in which you either accept a disadvantageous set up or manually assign your units around the map before play but, on the whole, minimal time is required before play starts.  Rough guess is that both scenarios and campaign turns can be played quickly, no more than ten minutes unless one has to cautiously plan the next move and this includes watching your opponent’s replay.   Larger battalion sized scenarios may take up to 15 minutes or more each turn.

BA and BA2 don’t get the full five points as many of the stock scenarios are not fully balanced.  I’ve noticed in other games the tendency to favor the German side with multiple Tigers and Panthers and face them against T-34s and maybe a few SU-152s.  Don’t get me wrong, there were quite a few poor bastards commanding a T-34 and coming up short against a Tiger but my understanding is that there were usually a little bit more on the quantity side for the Red Army than what I see in many scenarios.   The BA2 scenario Big Guns is an egregious example.   On the forums one of the Slitherene developers was mentioning that the Russian advantage was mobility but sometimes the size of the map and the terrain funnels the action into T-34 graveyards… That being said, there are more than enough scenarios that are enjoyable no matter which side one plays.

An improvement with BA2 is a scenario creator which is the skirmish. A player chooses general parameters to include map size, urban or countryside, snow covered ground, and general orders of battle for the opposing sides (for example 1943 Panzer Corps versus 1944 Soviet Mechanized Corps – though the largest scenarios might feature a battalion’s worth of armor and a couple companies of infantry).

I tend not to play the campaigns as neither BA or BA2 allows one to keep the same command and follow the same units as they gain experience.  They are basically one linked scenario after another with different challenges and new units. For me, playing the AI is never as enjoyable than matching wits with a good human opponent.

Historical Accuracy – Low score but I’m not playing BA to recreate specific battles or explore the peculiarities of tactical combat between various armies.  I’m playing to have fun with good opponents.

Many base BA and BA2 scenarios force selection options have nothing in common with historical orders of battle and game play involves moving individual units independently instead of command and control rules that would require units to move and fight as a company or platoon.  Despite that, I don’t have any issues with the basic armor and firepower ratings of the various units (though the modder that created the Seelow Heights scenario made the Soviet Scouts well neigh indestructible – must be that personal titanium body armor technology that was deployed in 1945 but disappeared in some post war Stalinist purge of Soviet scientists).

For those new to gaming I’d say that BA and BA2 have the “rock, paper, scissors” aspect of WW2 combat down pat.  The tank is the king of the open spaces and only other armor or an airstrike pose an immediate threat.   Inside a city or village infantry rules and any vehicle advancing without an escort will not be long for the world.  Get close to a wood line, a village, or unharvested fields and the AT gun can reach out and hit armor and even disrupt enemy infantry while remaining hidden, though AT guns crews are extremely vulnerable to infantry.   The ambush feature or the ability of a unit to remain hidden while firing from cover is well done. Depending on the unit’s size and type of cover an infantry unit or gun crew can usually get off a shot or two before they are spotted. If a tank is unaccompanied by infantry or supporting scouts the hidden AT gun may never be revealed.

Artillery, the great nemesis of infantry and the number one cause of casualties on the Eastern Front is not really well simulated.  I think this is because the scale is so small.  A historical recreation of an accurate artillery barrage on a company’s position would have the game over in one turn.  On map artillery units, such as mortars and mobile guns are better modeled and are very effective against enemy infantry in the open and moderately effective when the enemy is under cover. Smoke rounds are available to screen an advance or protect an exposed tank that has been engaged by a hidden AT gun.

As mentioned before, each unit is independent and is not organized by platoon, company, and battalion.  Many scenarios contain leaders but their main function is to rally the troops or allow them one turn enhancements such as extra movement or firepower.  These abilities are not limited to troops in a particular organization with the exception that a tank leader can only provide benefits to other tanks and an infantry leader only to infantry and AT guns.

Game Community – Medium score as I don’t see many folks posting open challenges on the servers.  Majority of posted games will be private and only a few open ones show up so I’m thinking the community is not so large.  Despite that, I’ve found that I don’t have to wait long until someone accepts an open game. You could post four or five games and they will be accepted within a couple of hours. The game has been released in multiple languages so you may find yourself playing opponents from anywhere in the world.

Quite a few really good scenario designers enhance the game and ensure the game community score is at medium and not low.  Enric is out there recreating many of the Squad Leader scenarios for BA2 on what seems a daily basis.  Check out his Stalingrad scenarios – the Tractor Factory being a small one that is quickly played and a real brawl for both sides.  Anything by Cavehobbit is a must and his Near Smolensk scenario is a masterpiece.  From time to time C-Hobbit also runs a tournament and that’s when the real killers come out.  I consider myself a good war gamer but there’s some sharks that just demolish me each time.

A criticism I have is the excessive manual effort required to update a scenario when the modder improves upon it which requires one to delete the old game file before downloading the new one.

Below are some examples from one of my favorite BA2 scenarios:  Prokhorovka.  The key to this one (as in the historical battle and as in many other East Front games) is for the Russians to get in close.  Fight the Tigers and Panthers at a distance and the superior German optics, gunnery and armor will defeat you time and time again.  Take the losses but concentrate your force, use that superior mobility, and get in quick. 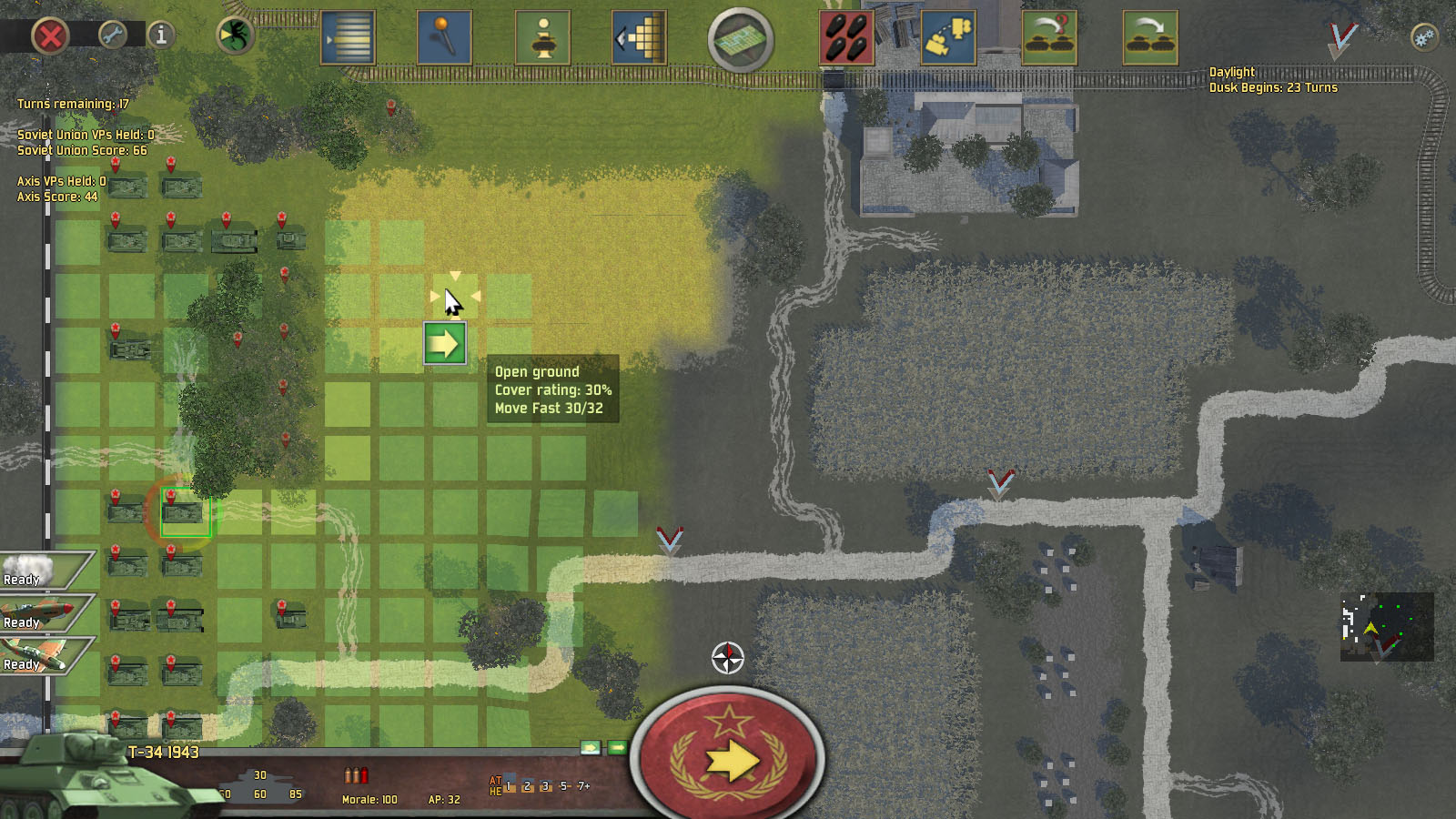 The opening set up for the Russians with the light green squares showing the potential movement distances for the highlighted T-34 in the middle.  This is the top down view, one I don’t use often.  Hold on, the graphics get better. 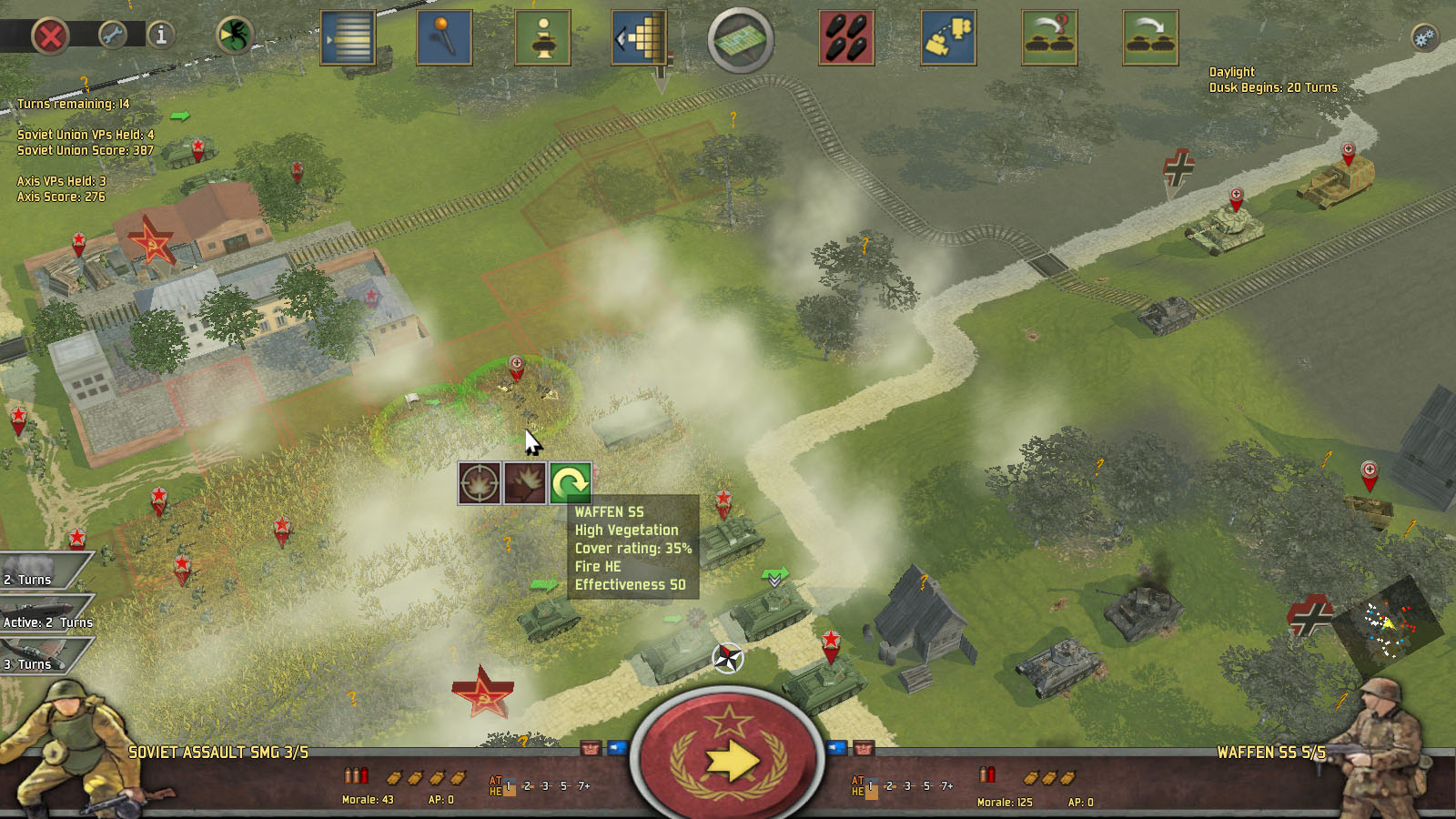 The Russians advance through the wheat fields under the cover of smoke.  The Germans had a squad of Waffen SS in the field as an advanced outpost and they engaged and demoralized the unfortunate Russian SMG platoon (small white flag) that stumbled upon them.  The options for the SMG platoon to fire or close assault (arrow pointing right) are muted and won’t be available until they recover morale. 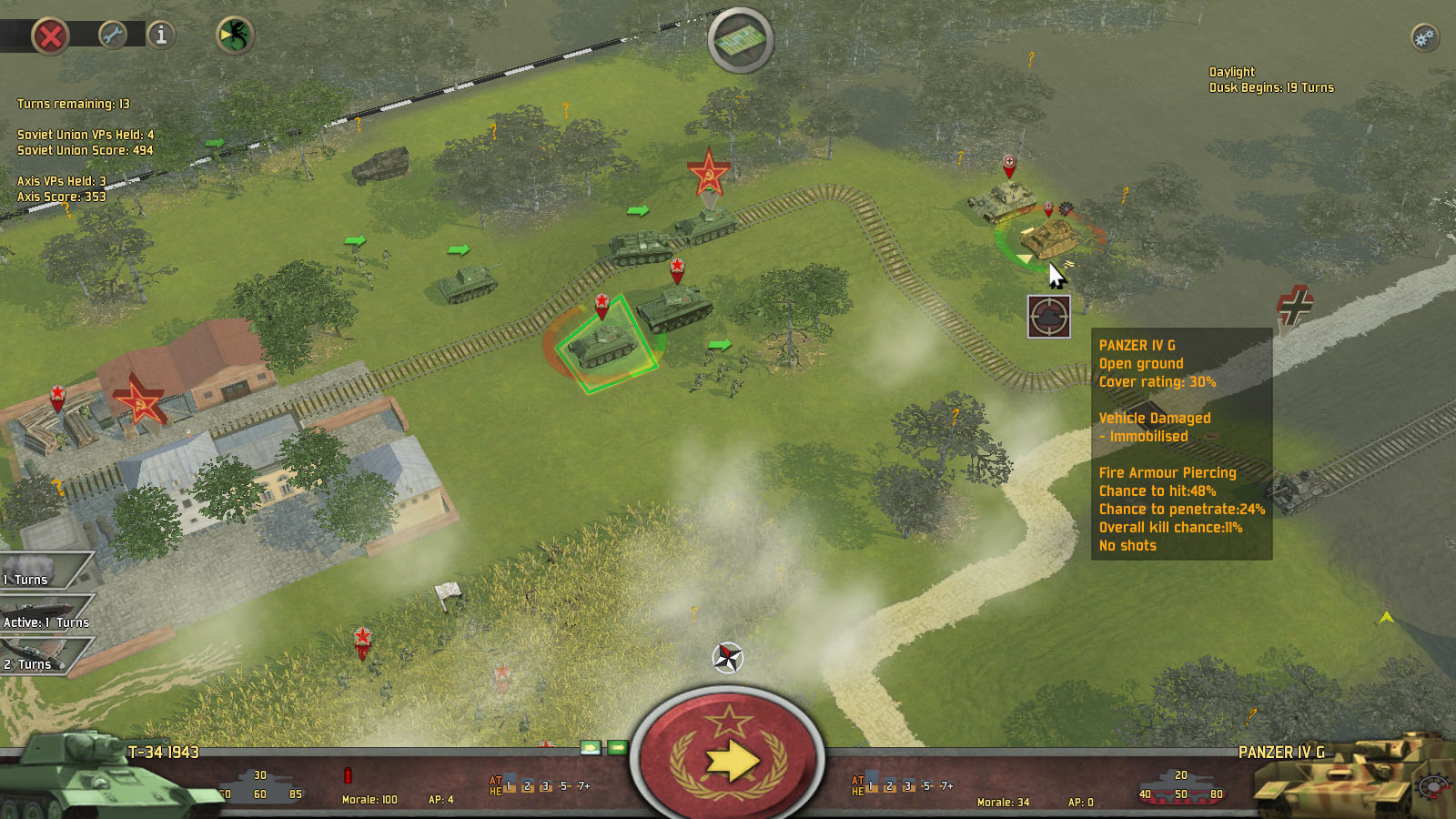 Advancing T-34 in the northern sector has engaged a PZ-IV and immobilized it.  No more shots are available this turn (icon is not bright red), though the T-34 may be able to get a reaction shot during the upcoming German player’s turn.   If the commander had time for one more shot the percentage ratios to hit and destroy the tank are shown. 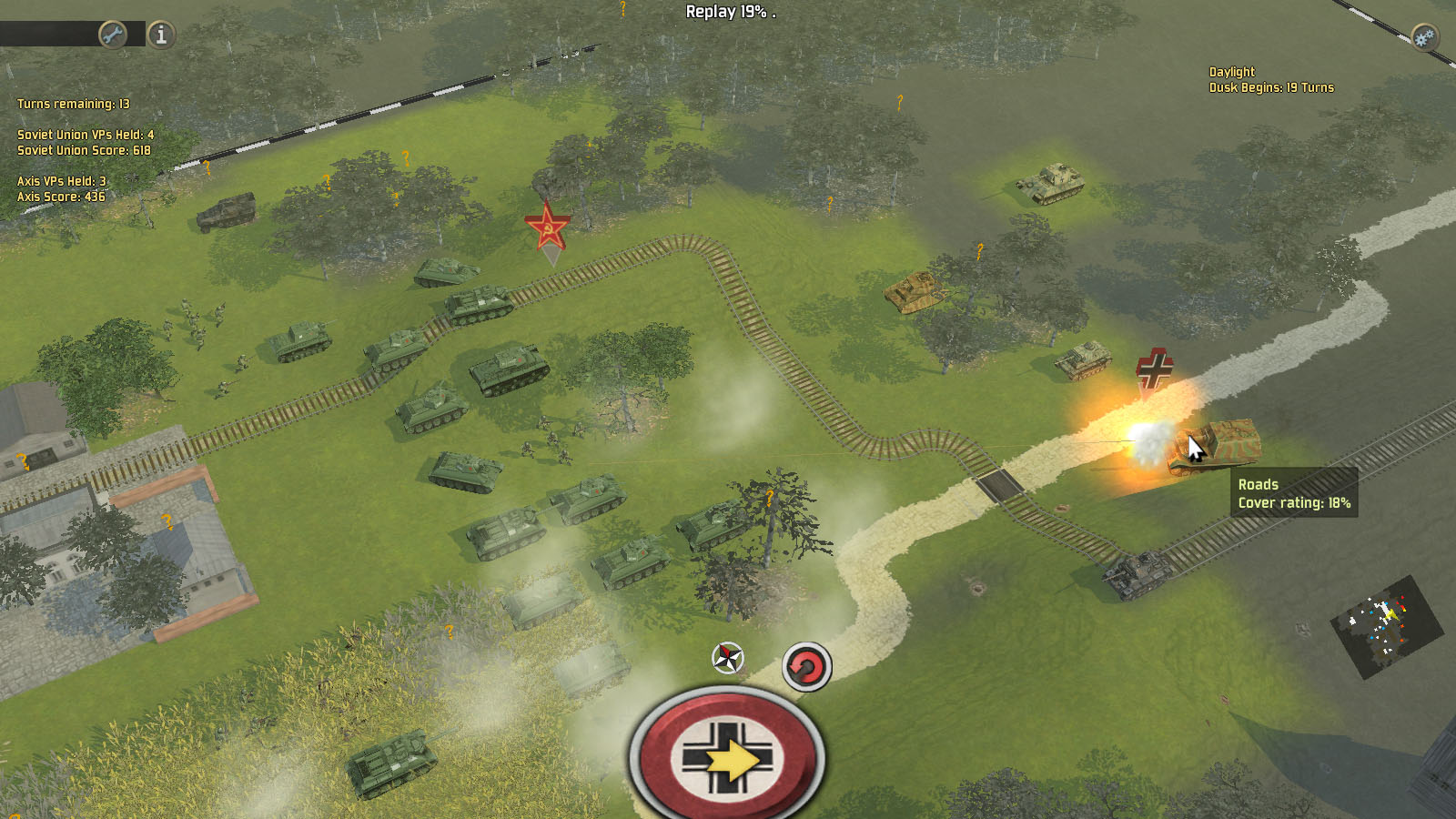 The German Panther commander wisely retreats, abandoning the immobilized PZ-IV to its fate.  The Panther had low moral after receiving multiple deflected hits and may have destroyed a couple of Russian tanks only to be overwhelmed in the next turn.  There is some hope as a giant Elefant engages the advancing Russian armor from a distance.

This particular game ended in a Russian victory though I’ve been defeated by German players able to keep a distance.

Hope you enjoyed the review and hope to see you on the East or West Front soon.   Hit me up at yeolydeschool “at” outlook “dot” com if you want a game.

Finally, I’m at least four beers deep at this point so would like to state that any typos and grammar mistakes fall on the Ye Olyde School and not Castalia House!