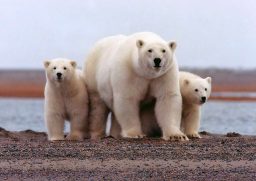 Back in the mists of time, I went to college, in Fairbanks, Alaska. While there, I met a scientist, a biologist, who studied bears. I didn’t know him well but, he moved in the same circles I moved in. He was an impressive guy. He was the sort of guy who drove his snow machine 100 miles into the woods to crawl into hibernating bear dens, hook straps to their feet, haul them out, weigh them, take blood and stool samples, and who knows what other parameters. I reckon, in the spring, the bears, upon waking, thought, “I don’t know why, but, I feel like I have been violated.” On one of these trips, his snow machine fell into a gully when the snow arching over it collapsed. He had to walk out on a broken leg. When a bear attacked someone and was shot, they sent him the carcass to autopsy. The arctic entryway of his cabin was lined with bear skulls. Upshot of all this is, he was a tough guy who had a lot of hard earned knowledge about bears.

Once, as my classmates and I were sitting in the cafeteria discussing a trip we were planning to visit Denali Park, we started discussing bears: their sizes, bear attacks we had heard about, chances of seeing a bear, and eventually, how to tell a female bear from a male bear. And, we saw, passing by, this biologist, so we asked him. He said, “It’s obvious, male bears are twice as big as female bears.” We were gobsmacked.  It seemed kind of extreme. Upon further questioning, he clarified that mature male bears weigh roughly twice that of mature female bears, size-wise the male bear was about 15 – 20 percent longer and wider. So, look for the overall smaller and less massive looking bears.

What does this have to do with role playing games? Well, role playing games rarely make the distinction between the sexes of animals or monsters encountered (assuming they are gendered). But, couldn’t they? Here is the Moldvay basic set bear statistics. Next to it I have put my version of female bear statistics (assuming the given stats are male bears). I changed Hit Dice, Damage, Save As, and Morale. 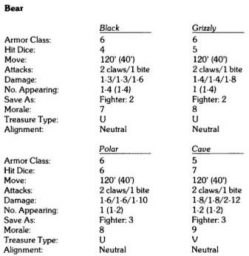 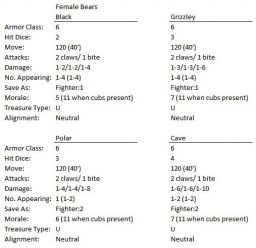 Now, anyone can quibble with the specific changes I made. But, clearly, an encounter with a female bear will be, well, a different animal than that of the male. An argument can also be made for lowering the male bear morale statistic because while, generally more aggressive, male bears also have nothing to gain in continuing to attack something (someone) they don’t plan to eat. Like a lot of male mammals, male bears engage in a lot symbolic territorial blustering but, rarely are going to fight to the death once injured. But, everyone knows about mama bears and their cubs. It’s easy to see that a similar approach could add diversity to a lot of monster encounters. Are female dragons different than males in size and behavior? Who knows? Wouldn’t it be neat it they were?

Sexual dimorphism has reared its head in Dungeon’s and Dragons previously. The presentation of female orcs and orc children in B2 – The Keep on the Borderlands is famous for the moral conundrum it poses. The female orcs are not hostile (so much so, that statistics are not presented) so, once the party has killed the males, what’s to be done? Orcs, after all, are Evil! And, 1st Edition Advance Dungeon’s and Dragons is a bit infamous for setting strength limits for female characters for the various races.

It’s been argued that to include delineations of the differences between the sexes is, in itself, sexist. But, facts can’t be sexist. Sexual dimorphism is real and it exists in both bears and humans. Now, the particular presentation of sexual dimorphism might be sexist (or at least inaccurate). For example, in 1st Edition Advance Dungeon’s and Dragons female humans are limited to a maximum strength of 18/50 and male to 18/00 which results in a three times difference in carried weight allowance male to female. This might be too extreme. World record deadlift for men is 1015 pounds (Benedikt Magnusson) and female is 683 pounds (Becca Swanson). This is a ratio of 1.49 rather than 3. But, these are the maximums. What about the averages? There is evidence to suggest that that average man is stronger than most woman. To model such a difference, the rules would need to require female characters to roll different dice than male characters. But, 1st Edition Advance Dungeon’s and Dragons does not do this, all characters roll 3d6 and, if a fighter, 1d100 for strength greater than 18. The maximums are just truncated. So, given this, the average 1st Edition Advance Dungeon’s and Dragons female has much less differentiation from the male than real life.

Yes, I recognize that we are talking fantasy here. And, definitely, in fantasy there is no requirement that such distinctions need be made. Certainly, it would be wrong to prohibit players from playing a particular sex of character based on the player’s own sex. That, would indeed be sexist. But, couldn’t making such distinctions in a game add a bit of reality and variety to a game? Sexual dimorphism is real and there is nothing wrong with modeling it in a game.