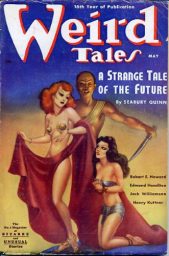 Robert E. Howard continues to shine as a better model for Lovecraftian gaming than Lovecraft himself.  In Pigeons From Hell, available in its entirety from the Australian Project Gutenberg, two New England hikers stop for the night to make camp inside an abandoned Plantation Home somewhere south of the Mason-Dixon line.  A ghostly face appears in the darkness above the two, and one wanders upstairs in a trance.  Through mysterious means most foul, he descends the stairs with a hatched in hand and gaping hatchet wound in his skull.  His companion, Griswell, flees the old house Scooby-Doo style, pursued through the dark pinelands by an unseen creature, to be saved in the end by a wandering Sheriff on the midnight road.

After a hasty explanation and look at the tracks of the thing that had chased Griswell – a fruitless investigation that leaves enough mystery hanging to cover the rest of the tale with a pall of danger, Griswell and the Sheriff Buckner return to investigate the strange occurrence.  Though skeptical of the fantastic tale at first, Buckner’s investigation slowly convinces him Griswell’s strange tale must be true…or at least owe some large debt to the truth.

“I want to be fair,” [Buckner] said quietly. “I haven’t indicted and condemned you in my mind already. If only half of what you’re tellin’ me is the truth, you’ve been through a hell of an experience, and I don’t want to be too hard on you. But you can see how hard it is for me to believe all you’ve told me.”

Griswell wearily motioned for him to lead the way, unspeaking. They went out into the hall, paused at the landing. A thin string of crimson drops, distinct in the thick dust, led up the steps.

I’ve got to be sure of what I see, because we’re obliteratin’ them as we go up. Hmmm! One set goin’ up, one comin’ down. Same man. Not your tracks. Branner was a bigger man than you are. Blood drops all the way—blood on the bannisters like a man had laid his bloody hand there—a smear of stuff that looks—brains. Now what—”

“He walked down the stair, a dead man,” shuddered Griswell. “Groping with one hand—the other gripping the hatchet that killed him.”

“Or was carried,” muttered the sheriff. “But if somebody carried him —where are the tracks?”

When the immediate investigate fails to provide fresh light on the situation, the pair retreat to the porch to await the morning.  Daylight sheds no new information and the two conspire to return the next night to further explore the old home.  They agree to leave the rest of the authorities out of the matter – aside from a sketchy tale about how Griswell’s companion was murdered by men or parties unknown – until they can solve the riddle.

Said solution involves gathering more information about the old house – the cursed remains of a once powerful plantation family who brought their ante-bellum fortune from the West Indies that they lost in the aftermath of the Civil War.  A tortured mulatto maid.  A bitter spinster aunt.  Four sisters, of whom three mysteriously disappeared and the fourth fled for California never to be seen again.  But the cherry on top of the investigation sundae consists of a haunting interview with a wizened old man who admits to delving too deep into Things Man Was Not Meant to Know:

He followed Buckner to the tiny stoop, where the sheriff pushed open the leather-hinged door and strode in. Griswell blinked in the comparative dimness of the interior. A single small window let in a little daylight. An old Negro crouched beside the hearth, watching a pot stew over the open fire. He looked up as they entered, but did not rise. He seemed incredibly old. His face was a mass of wrinkles, and his eyes, dark and vital, were filmed momentarily at times as if his mind wandered.

“Jacob,” he said bluntly, “the time’s come for you to talk. I know you know the secret of Blassenville Manor. I’ve never questioned you about it, because it wasn’t in my line. But a man was murdered there last night, and this man here may hang for it, unless you tell me what haunts that old house of the Blassenvilles.”

The old man’s eyes gleamed, then grew misty as if clouds of extreme age drifted across his brittle mind.

“The Blassenvilles,” he murmured, and his voice was mellow and rich, his speech not the patois of the piny woods darky. “They were proud people, sirs —proud and cruel. Some died in the war, some were killed in duels —the menfolks, sirs. Some died in the Manor—the old Manor—” His voice trailed off into unintelligible mumblings.

Is the old man senile?  A liar?  A coward hiding in his dark hovel?  He raves about his secrets and fears the wrath of the black gods of the swamps, fears that prove well founded before the interview is over.  Before then, old Jacob lets slip a few clues about the source of the evil inside the Blassenville Manor that fill in a few gaps in the local Sheriff’s knowledge.

Griswell and Buckner return, now armed with enough information about the manor to spend one more night hunting the creature that dwells within.  After a blown saving throw and a lucky to-hit and damage roll, the threat is neutralized and the mystery resolved.  Said threat proves to be considerably lower tier than cosmos spanning horrors from beyond the uttermost ragged edges of time and space, but makes for a considerably stranger threat than a few robbers or Old Man Winters trying to get his hands on the deed to the land.  Although the peek behind the curtains of reality will surely cost both men a few precious points of sanity.

If you really want to know how to run a game of Call of Cthulhu, forget the Keeper’s Advice section of the rulebook.  Forget the pre-packaged adventures.  Forget even Lovecraft himself, whose threats are either too big and too sanity blasting, too tightly bound up in the protagonist’s bloodlines, or too psychological to hold the interest of a pack of bloodthirsty players for long.  Forget all of that.  The Pigeons From Hell is the real deal – a murder, investigation into the supernatural, a faded journal, crazy rantings from a possible witch doctor, a flock of pigeons that serves as a harbinger of doom, and a final showdown with a monster in a bleak house in the pinelands.  Even a last sentence twist that turns the tale on its head at the last moment!

Howard gives the reader enough information to run this tale with no other preparation than reading this story.  Find a dozen more like it, notice the common threads, steal from them all, and you’ll improve your own game tenfold – and far faster than you would reading a hundred blog posts from gimmicky self-styled gaming advice gurus.