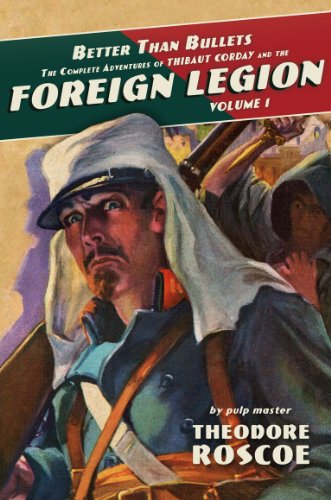 Whether in life or in the pulps, old soldiers tell some of the greatest tales. And, in the pages of Argosy, from 1929 to 1939, there were none older that Thibaut Corday, an eighty-year-old legionnaire of the French Foreign Legion whose beard has yet to run completely white. Written as told to Theodore Roscoe, the old legionnaire would recount twenty-one adventures in that time.

As for Roscoe, a trip to the Caribbean and North Africa in 1928 and 1929 inspired an interest in old voodoo tales and the French Foreign Legion, both topics he would explore in the pages of Argosy to great acclaim. Per Gerd Pilcher’s introduction to the Better Than Bullets collection, “reading an ordinary pulp story was compared to ‘reading in black and white,’ reading a story by Roscoe however as to ‘reading in technicolor.’” The countless encounters with Legion officer and veterans no doubt fueled the authenticity of Corday’s tales, and covered for the occasional lapse. After all, a good storyteller is concerned more with the appearance of reality.

Like many writers in the Forties, Roscoe would leave the pulp world, this time for the more lucrative true crime tales. Thanks to Altus Press (now Steeger) reprinting Thibaut Corday’s tales, readers can still find the old legionnaire in an Algerian café, waiting to tell his tall tales. And like so many old soldiers, his first tale, “Better Than Bullets”, holds more humor than war:

“You say, my American friends, that bullets are the best of weapons? But yes, perhaps. And with bullets I am a man the most familiar…Splendid for the fight. But—I recall a battle I fought in which I used never a blade or a single bullet…No soldiers ever fought with weapons more strange!”

With that, the old legionnaire begins a tale most familiar to any man in uniform—how a little bit of mischief blows up into something far worse, terrifying at the moment, but ridiculous in hindsight. In 1907, Corday’s legion just completed a long march on little water and worse food. His partner in crime, a Yankee known as Bill the Elephant, sees farmhouses in the distance and convinces Corday and Christianity Jensen to join him in a little “foraging expedition” at night.

Their raid finds a pair of piglets and fifteen bottles of wine. As the trio carouses, however, a gang of Moslem dervishes comes across them with murder on their mind and an inclination to linger over the task. Now the trio of legionnaires is trapped red-handed in the farmhouse, with nothing more than bottles, boots, bacon, and beehives to defend themselves. But will these things prove to be better than bullets?

It’s an amusing tale where the ridiculousness of the scenario is played straight, and a classic example of the military definition of serendipity: “yes, we screwed up, but it turned out better than if we hadn’t.” That fact doesn’t save the trio from two weeks of hard labor for breaking their commander’s orders, though, so the story ends in proper military fashion, with the guilty punished and a dash of self-deprecation.

Rather than speak of the Argosy prose style yet again, “Better Than Bullets” is vivid because of Thibaut Corday’s voice. Roscoe expertly captures the flair of a verbal storyteller in Corday’s first-person tale to the point where a reader can almost hear the legionnaire. This is a story that begs to be performed in audio, not read, to recreate the effect of listening to a master of tall tales over a cup of coffee. The descriptions also are vivid and tight within Corday’s voice, with the little descriptive tangents fitting where a café storyteller would naturally make such. No doubt, Roscoe spent time listening to storytellers in addition to reading them.

Argosy collections never fail to deliver, and Better Than Bullets is no exception, living up to the praise flourished in the ad-copy blurbs for the book. And so we shall return again to a simple cafe in Algiers to listen to an old soldier who still has streaks of rusty cinnamon in his beard.