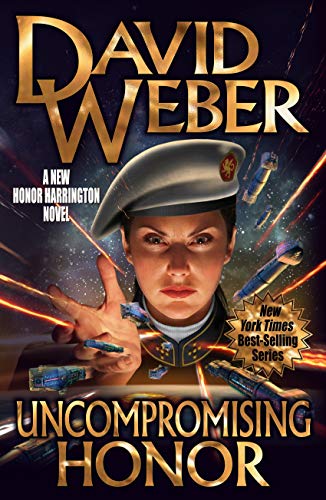 David Weber’s Honor Harrington series started from the simple conceit of Horatio Hornblower in Space and grew into one of science fiction’s few pillar series, critically and commercially successful in a time where most science fiction readers are turning towards the classics instead of the contemporary. Over nineteen books, the crucible of constant war tempered the charismatic Honor Harrington from a tentative ship’s captain on her first command in peacetime into the fiery Salamander of Manticore, the fearsome fleet admiral found fighting where the battles raged hottest.

While many space navy adventures tend to follow the adventures of a Captain Kirk-expy, Honor Harrington, as significant as her shipboard prowess may affect history, is but one woman in a cast of hundreds that bring both a political and a human scope to the actions on the battlefield. Clearly demonstrating how politics, technology, and war influence and affect each other, Weber places his heroine in the center of many revolutions drawn from historical analogues, including the French Revolution, the Napoleonic Wars, the naval Dreadnought revolution, and the crusade against slavery. Furthermore, Weber blended Hornblower with modern command practices, ending a fascination of many Hornblower copycats with insubordination and Churchill’s description of the Royal Navy’s traditions as “rum, sodomy, and the lash.” Honor Harrington is a true science fiction epic, spanning the Salamander’s full command career and a quarter of the galaxy, through triumph, setback, hubris, and tragedy.

In Uncomprosing Honor, Weber brings his epic to a conclusion. Weighing in at 961 pages, this final doorstopper will give military SF readers much to chew on. But when the final page is turned, two questions remain for the naval science fiction fan: what’s next for the Star Empire of Manticore, and what to read next? Only Weber knows the answer to the first, but for the avid reader searching for more in the vein of Honor, consider a trio of suggestions. 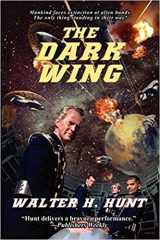 The birdlike zor are just one of the alien races that humanity encounters when it travels to the stars, and from the very first meeting it has been all-out war. For many years the conflicts have been sporadic, usually ending with an Earth concession and a treaty. But the zor do not respect mankind and have no intention of honoring the agreements. When the zor decide to mount a surprise attack against human colonies, the normally self-absorbed government of Earth realizes that something must be done before it is too late.

A controversial scholar by the name of Ivan Hector Charles Marais, a former admiral, is brought in to take command of the Space Navy and defeat the enemy. Marais has spent his entire life studying the zor and claims to have a plan to deal with them once and for all. With so few options remaining, Marais is put in charge of the battlefleet.

Earth just wants the threat neutralized and would be happy with a stalemate, but Marais has other ideas. He presents himself as the Dark Wing of zor mythology, destined to exterminate the zor, and unwilling to accept a return to the status quo.

In the 2000s, science fiction writers paid more than lip service to exploring delicate social issues through the lens of a galaxy far, far away. In The Dark Wing, Hunt tackles the unthinkable: is genocide ever moral, and is there such a thing as not enough killing? This is not a bloodthirsty propaganda piece, penned just before 9/11, but a sober exploration of the costs of peace with an ideology-driven enemy. The bird-like zor are presented as truly alien, with thought patterns, societies, and methods of communication that are truly other than human. Marais’ character might bear shades of Grand Admiral Thrawn in his attempts to wed culture to strategy, but it is his comparisons to Caesar and Napoleon which fuel the political drama as those who are unwilling to bear the cost in lives try to break Marais to the leash. Naval, political, and moral conflict abound in Hunt’s bold thought experiment, but it would be all for naught if the space opera couldn’t carry the action required. 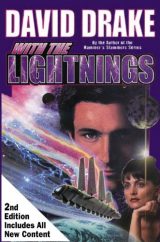 With the Lightnings, The Republic of Cinnabar Navy series, by David Drake

Daniel Leary is a lieutenant in the Republic of Cinnabar Navy with no money and no prospects since he quarreled with his ruthless, politically powerful father.

Adele Mundy is a scholar with no money and no prospects since her family was massacred for conspiring against the Government of Cinnabar.

Kostroma is a wealthy planet which depends on diplomacy to stay independent in a galaxy whose two great powers, Cinnabar and the Alliance, battle for supremacy.

In a few hours, diplomacy is going to fail Kostroma. Daniel, Adele, and the scratch crew they gather aren’t much to stand in the way of a powerful invasion fleet, but just possibly they’re enough.

Men and women who hold courage cheap and honor more dear than life itself face impossible odds in a novel of color, intrigue and slashing action. From the corridors of a treason-ridden palace through the perils of unknown seas and hellish jungles to a final blazlng climax in space, the heroes never bow and the action never flags.

They have nothing on their side but each other—and heaven help whatever tries to stand in their way!

With the Republic of Cinnabar Navy series, David Drake, the renowned author of Hammer’s Slammers, turns to the stars, bringing an Age of Sail approach to space travel. No other science fiction writer has capture the nautical feel of ships and crew into hyperspace in the same way as Drake, including the roughneck nature of the crew–and the utter capriciousness of hostile vacuum. But while Drake’s version of Hornblower in Space transposes the realities of sailing ships into space, he chooses not to rehash the Napoleonic Wars. Instead, Drake draws upon classical history for his stories, and his afterwards describing the correspondences between Greek and Roman history and Leary’s adventure are not to be missed. The heart of the story, however, is the strange friendship between the charismatic Leary and the utterly pragmatic Mundy, and how they protect each other through the storms of politics and firepower. 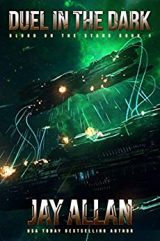 Duel in the Dark, Blood on the Stars series, by Jay Allan

The Confederation battleship Dauntless has spent ten months patrolling the border, alone, watching for an attack from the enemy Union. Her crew is exhausted and the aging vessel needs repairs.With the fleet mobilized, and the forward bases overloaded beyond capacity, she is sent clear across the Confederation, to a base along the peaceful and sleepy sector known as the Rim.

But the quiet frontier isn’t what it seems, and when a distress call is received from a mining colony at the edge of Confederation space, Captain Tyler Barron must take Dauntless forward into the unknown.

Barron and his crew have their ship–and each other–but they can expect no reinforcements. His superiors believe that Union deceit is at play, that the attack is merely a diversion,intended to draw Confederation forces from the disputed border. Their orders are clear: no ships will be transferred from the front. Stopping whatever is happening on the rim is Barron’s responsibility, and his alone.

Barron’s grandfather was the Confederation’s greatest hero, the father of the modern navy. His name has always carried great privilege, and crushing responsibility. Now he must prove that he has inherited more than just a name. He must face the enemy, and win the victory.

Before the Confederation is caught between two enemies and destroyed.

If The Dark Wing is the philosopher’s choice, and With the Lightnings the historians, Jay Allan’s Blood on the Stars is the adventure fan’s choice. Allan uses World War II as a model for space combat, relying on the familiar mix of fighters and battleships to hammer apart fleets. But the deciding factor in this naval conflict is, instead of the Manticore Missile Massacre, the bravery of engineers at their stations is just as vital as the gunners and pilots. Allan manages to illustrate this damage control race in broad strokes without resorting to technobabble, detailed technological descriptions, or deus ex machina, preserving a backdrop of suspense to the clashes between captains. Tyler Barron’s career echoes Honor Harrington’s, from the dueling ships at the start of the war to leading fleets through two separate and vicious wars, complete with backstabbing from the politicians back home. But like the worldbuilding, the conflicts are described in broad strokes, with enough detail to paint the situation without delving into minutia like Weber can. The result is a stripped-down version of a naval space epic focusing on the action and emotion battle and intrigue that is among the best current stories in all of science fiction, not just indie.