Book Review: One Year After 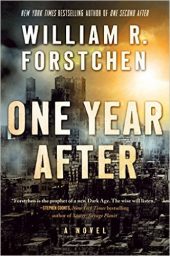 William R. Forstchen’s One Second After is the scariest book I have ever read. No horror novel ever came close to shaking me up like Forstchen’s tale of an electro-magnatic pulse (EMP) attack on the United States by terrorists.

One Second After chronicles what happens when three nuclear bombs are exploded above the atmosphere. The magnetic pulse fries everything electronic unless it has been hard-wired. That mean no cars and trucks can start, you can’t pump gas as the pumps won’t work.

The average city has a week’s supply of food. At the end of the week, most nursing home inhabitants are dead from dehydration. The workers have taken off and there is no water available. Mobs ransack pharmacies in the first few days. Drug addicts are desperate to find their next fix. Out of shape people are dying from heart attacks carrying buckets of water.

Medication runs out for most people after one month. People die from heart disease, diabetes, infection etc.

Around the three month mark, a wave of dysentery, influenza, typhus, cholera and other infectious disease kill about 1/3 of the population. Remember, the best defense against infectious disease is soap and water. When people are not keeping clean, disease explodes.

Then you have the food supply. Starvation is the big killer. People go cannibal at day 28. This is consistent throughout history.

One Second After chronicled theses events. About the only thing missing from the novel are gangs of former police who are better armed, take food, medication, or whatever they want. The incompetence of government is laid bare in this novel. The military returns from the Middle East after one year to establish order. Mexico has taken Texas, New 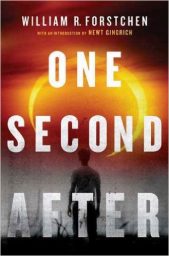 Mexico, and Arizona. The Chi-coms have occupied the western U.S. from the Pacific Coast to the Rockie Mountains under the auspices of humanitarian relief. About 80% of the total U.S. population is dead. Everyone in Florida is dead.

One Year After came out last October. I was finally able to get it from the library as it was constantly checked out. One Year After picks up not quite two years after the EMP attack. The military has pulled out to put down gangs elsewhere. A mediocre bureaucrat sent with some paramilitary conscripts and Blackwater type mercenaries takes over.

Draft notices for all able-bodied younger men and women are sent out for induction into the Army of National Recovery. This is a paramilitary organization under political, not military control. There is outrage as these are people needed to continue with the slow, painful process of reconstruction. I think Forstchen is using Baraq Obama’s “Civilian National Security Force” as the basis of the ANR.

The federal administrator knows how many people are in an area and their ages as that information was gathered with data from ration cards.

The head of Department of Health & Human Services claims to be President of the United States with a vice-president who was a high level functionary of the Department of Homeland Security. So, there are issues regarding the legitimacy of the federal government.

The Federal administrator quickly becomes the villain as he uses attack helicopters to attack women and children of bands of people who have survived in the wilds known as “Reavers.” Their crime is not coming in to take ration cards and submit to Federal rule. 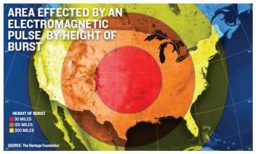 The main character of this series, John Matherson, is offered a commission as a general in the U.S. Army as a bribe. He sided with the inhabitants of the town of Black Mountain in not turning over people wanted by the Federal administrator. There is a battle against the poorly trained paramilitary ANR and mercenaries. This is not the only place this is happening. There are mentions of the Great Lakes region in general not taking to federal rule. The outfit claiming to be the U.S. federal government drops a neutron bomb on Chicago after the Army of National Recovery gets it head handed to it by the gang controlling Chicago.

I have seen reviews of One Year After that consider the sequel to be a lesser work. I disagree; Forstchen had exactly the right idea. A disaster of this sort would be the end of the United States as we know it. There would be no putting Humpty Dumpty back together again under Washington, D.C’s control. The out of control federal administrator with his jack booted enforcers all rings true. The best-case scenario would be a coming together of the various states with some sort of new Articles of Confederation.

Electromagnetic pulse weapons are going to be part of future warfare. All these modern electric gizmos will be rendered useless with a good magnetic pulse. Big future wars are going to look more like WWI than Starship Troopers.  I would like to see Forstchen write about the U.S. military pushing Mexico out of the South West and Chinese out of California and Pacific Northwest.

If you want to read some scary but thought provoking fiction, check out Forstchen’s One Second After and One Year After. 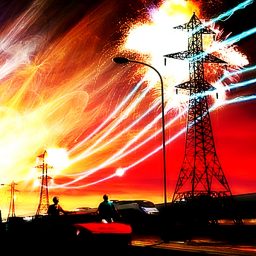