Buck Danny: The Secrets of the Black Sea 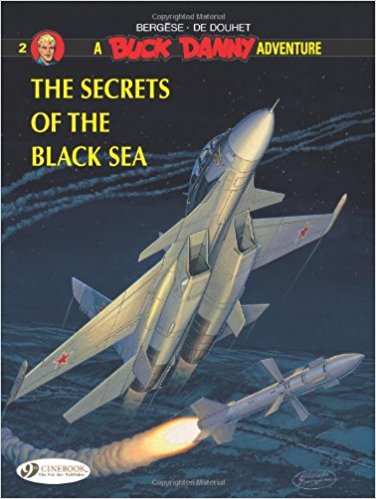 Ever since the Red Baron’s Flying Circus swept the skies clean of enemy planes, readers across the world have been captivated by the exploits of military aviators, real and fictional. When the newspapers weren’t singing the praises of Chuck Yeager, Eddie Rickenbacker, Robin Olds, and Duke Cunningham, the pulps churned out flying ace after flying ace, and the movies glorified the Right Stuff and the dogfight. Whether God is My Co-Pilot, The Flying Tigers, the Black Sheep Squadron, or even some whiny volleyball player named Maverick, audiences could not get enough of an impressive parade of tall, handsome fighter jocks. But overseas in France, unknown to many of his contemporaries, the greatest American ace is the comic hero Colonel Buck Danny, United States Navy.

I’ll wait a moment for all the old salts to regain their composure.

Despite the odd and distinctly un-naval rank, for seventy years Buck Danny has been flying everything from P-40 Warhawks with Chennault’s Flying Tigers, F-104 Starfighters, the X-15, F-14 Tomcats with the Navy, and most recently, F-22 Raptors with the Air Force, always with a Sergeant Major’s eye for realistic detail and procedure. A veteran of every American war from World War Two in the Pacific to today’s War in Afghanistan, Buck Danny’s career has been frequently split between the Navy and the Air Force in pursuit of adventure and the hottest airframes available. It’s easiest to think of this Navy recruit as an Air Force officer on loan to the Navy, just like his ever-present wingmen actually are. And in The Secrets of the Black Sea, the Navy sends Colonel Danny as a liaison to the Soviet Union in the last days of perestroika and glasnost, just before the coup attempt that signaled the end of the Soviet Union. 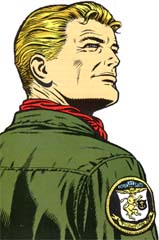 Not many sailors (airmen?) get orders direct from the Chief of Naval Operations, but the threat of a growing Soviet carrier fleet compels the CNO to send Colonel Danny to investigate. Posing as a senator’s aide, Danny is couriered out to the Kuznetsov, the Soviet Union’s newest fleet carrier, but a salvo of missiles interrupts his flight. He and his Russian plot are rescued, and are brought about the Kuznetsov for a Soviet-American friendship dinner. But the next day, the KGB makes its move to arrest the American “spy.” Now his wingmen, Major Tumbler and Captain Tuckson (both proper USAF), must work with a splinter of the Russian navy to free Colonel Danny from spetsnaz, pirates, and hardline Soviet rebels in the middle of a Soviet coup. It might be a direct story in its setup, but the joy is in the experience. And the fireworks of Soviet missiles lighting up the night skies.

The Secrets of the Black Sea is the 45th volume in the long-running annals of Buck Danny’s adventures, and the personalities of Buck and his wingmen have been established for so long that the book spends little time restating them. Buck Danny is the American ideal, a tall, handsome athlete of unquestionable loyalty, enduring toughness, and a hot hand on the stick. Rather than adhering to the legendary egos stereotypical of fighter jocks (How can you tell the difference between God and a fighter pilot? God doesn’t think He is a fighter pilot.), Colonel Danny’s cool professionalism is constantly on display. Major Jerry Tumbler is Danny’s cynical dark foil, and the only man to rival the best pilot in the Navy. Captain Sonny Tuckson is France’s take on the pugnacious Texan, swaggering, insolent, a daring risk-taker, and a fearsome foe in the skies. The trio are not just the Navy’s best, they are the best that America can offer as pilots and men, seen through foreign eyes more interested in the romance of the skies than American jingoism or anti-American chauvinism. 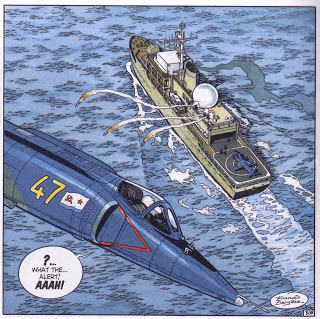 Realism gets a bad rap around here, as the fascination with literary realism stripped heroism and adventure from American fiction. However, the artistic teams behind the 70-year run of Buck Danny have always sought to accurately depict the military hardware and military procedure of the present. 1991 brought satellite communications, anti-submarine helicopters, man-portable surface-to-air missiles, and communications jamming to Buck Danny‘s skies. The Russian pilots use at the time recently invented supermaneuveribilty techniques such as the Cobra. And every ship and aircraft is lovingly rendered in thin ligne claire lines in unstylized poses that recall the best publicity posters released by the Armed Forces. Yet for all the strict adherence to reality, Buck Danny never devolves into Tom Clancy-style obsession with military hardware. The pursuit of authenticity provides setting and story for grand adventure, instead of turning the wonder of flight into mundane routine. But the dedication to authenticity extends beyond the hardware. Buck Danny and his wingmen are drawn in a style reminiscent of American comic strip serials and act like pulp heroes. Danny, Tuckson, and Tumbler interact with the easy friendship, shared love of adventure, and common purpose seen between Doc Savage and his friends. The result of this authenticity is a comic book that’s more Americana than Archie or Mickey Mouse, but without the twee nostalgia or bitter subversion lately found in either.

Previous bandes dessinées reviewed here have been aimed at adult audiences. Buck Danny, however, is a true all-ages book that delivers adventure that appeals to young and old alike without resorting to dumbing down the story. Do you know a child or a teen fascinated with flight or the military? Hand them a copy of any of Buck Danny’s adventures. I wish someone had done so when I was a plane-crazed child, or a military-mad teen, or even a newly-minted recruit. Now I get to look forward to sharing them with children, nieces, and nephews of my own. 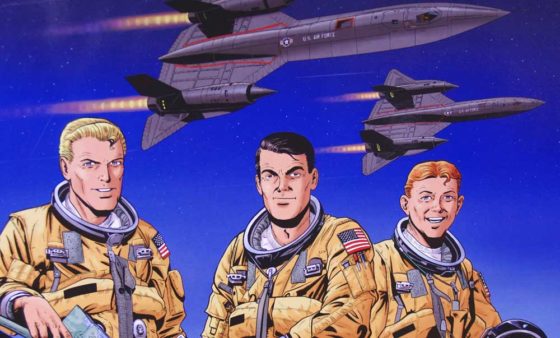