In addition to the multi-author paperback anthologies reprinting Weird Tales fiction, there are some single author collections that can expand your reading experience.

E. F. Benson is one of the great English ghost story writers. Benson had seven stories in Weird Tales from 1929 to 1933. You can find them in the Wordsworth Night Terrors for only $7.99 at Amazon. Benson had a story about Pictish ruins in Scotland and also a great Yeti/Sasquatch in the Alps story. 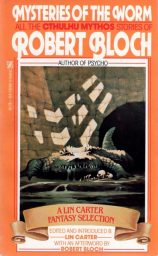 Ray Bradbury was a centerpiece of Weird Tales in the mid-1940s. Arkham House published Dark Carnival,  which contained a good portion of his Weird Tales fiction. Dark Carnival is one of those holy grail books, it commands high prices. Gauntlet Press did an expanded edition of Dark Carnival in 2001 which sold for $150.00 at the time. Online copies for sale start at $398.00.  The October Country has eight stories from Weird Tales. Bradbury apparently rewrote some of these stories and this was supposedly his preferred presentation. This has been in print forever. You can find it at your local bookstore. If you are lucky, there is a paperback called Bloch and Bradbury (Tower Books, 1969). The book contains four by Bradbury and six by Robert Bloch. Bradbury’s stories from Weird Tales are my favorite by him. Some are wonderfully nasty. Bradbury hadn’t gone all sentimental yet.

Joseph Payne Brennan was one of the last great authors to come out of Weird Tales. All four of his stories were reprinted in the Arkham House collection Nine Horrors and a Dream. There was a Ballantine paperback from 1962. Brennan is one of my favorite horror writers. He keeps it short and effective with no affectations. The Shapes of Midnight (Berkley Books, 1980) only reprints “Slime” from Weird Tales. It is a great collection though and you should read it.

Hugh Cave had eleven stories in Weird Tales. Karl Edward Wagner reprinted eight of them in Murgunstumm (Carcosa Press, 1977). There is a Wildside Press reprint of the book. Cave is often ignored but he had some good stories.

There are three August Derleth paperback reprints of his Arkham House collections. His first Arkham House book, Someone in the Dark was a Jove paperback in 1978. An 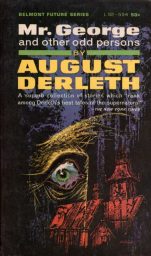 abridged paperback of Not Long for This World by Ballantine Books came out in 1961. Belmont Books put out a paperback of Mr. George and Other Odd Persons in 1964. These are the stories that appeared under the name of “Stephen Grendon” in Weird Tales in the 1940s. These are also generally my favorite Derleth stories. Derleth strikes me as missing that critical piece of misanthropy that often marks a good horror writer. He enjoyed life or that is the impression I get from his mainstream fiction. “Mr. George” and the “The Extra Passenger” were adapted for the Thriller T.V. show which raised Derleth’s overall profile.

The most common paperbacks you might see are The Mask of Cthulhu and The Trail of Cthulhu. Both are collections of stories that originally appeared in Weird Tales. They are pastiches of H. P. Lovecraft. The stories are competently written if lacking in real over the top weirdness. Cosmic horror was something that Derleth just did not have an understanding. Many of his stories concern the Deep Ones. Interestingly, Derleth changed the Innsmouth Look from being a fish appearance to a toad man. I have a feeling these were an influence on Karl Edward Wagner’s evil Batrachians in Bloodstone. There were paperback editions from Beagle Books, Ballantine, one mass market paperback from Carroll & Graf in the 90s, with an omnibus trade paperback. Barnes & Noble also did an expanded bargain hardback with some added stories called The Cthulhu Mythos in 1997. I have read far worse Mythos fiction. Derleth’s Mythos stories read like Sax Rohmer with some Lovecraftian names thrown in.

Edmond Hamilton was Farnsworth Wright’s main and best science fiction writer for Weird Tales. What’s It Like Out There (Ace Books, 1974) is an outstanding collection. Seven reprinted stories from Weird Tales, when Hamilton had developed into a good writer. His earlier work could be very formulaic and clunky. His 1940s fiction had some word poetry to it. Leight Brackett edited The Best of Edmond Hamilton (Del Rey, 1977). It contains seven stories from Weird Tales. Currently, Haffner Press has been producing The Collected Edmond Hamilton series. These are big hardbacks, very well made, and at a reasonable cost. Volumes 1 and 2 are out of print.

It is a shame that Carl Jacobi has not been reprinted more as he is another favorite. He was a very effective teller of horror stories. Jove reprinted Revelations in Black in 1979. You just don’t see this at used bookstores. Snatch it if you see it.

Otis Adelbert Kline’s “Buccaneers of Venus” was reprinted as The Port of Peril, an Ace paperback in 1964 with a Roy Krenkel cover. This is a sword and planet novel. Kline was adhering very closely to Edgar Rice Burroughs in this one. Tam, Son of the Tiger is a Burroughsian feral man raised in wilderness and finds a lost civilization novel from Weird Tales. There was an abridged Avalon hardback in 1962. Someone has reprinted the novel using Create Space at Amazon.

Henry Kuttner was part of the Lovecraft Circle. He wrote Cthulhu Mythos and sword and sorcery tales. Paizo’s Planet Stories line put out a trade paperback collecting the Elak of Atlantis and Prince Raynor stories. Robert M. Price edited a collection for Chasosium, The Book of Iod. Haffner Press is producing hardbacks. Terror in the House is out of print. The Watcher at the Door is in the pipeline.

Greye La Spina’s novel “Invaders From the Dark” (1925) was an Arkham House book in 1960. There was a Paperback Library reprint as Shadow of Evil in 1966 where the book was packaged as a standard Gothic.

Some of Fritz Leiber’s Weird Tales fiction was in the Arkham Night’s Black Agents (1947). There was an abridged Ballantine paperback in 1961 and a Berkley reprint in 1978.

Frank Belknap Long’s Hounds of Tindalos was broken up into two paperbacks in the 60s by Belmont Books (Hounds of Tindalos and The Dark Beasts). A very similar in contents collection The Early Long (Doubleday, 1975) was a Jove paperback in 1978. Belmont Books reprinted “The Horror From the Hills” as Odd Science Fiction 1964. This is the story that included a page by Lovecraft describing a dream where he was a Roman in Spain. 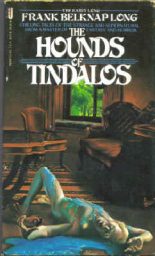 C. L. Moore’s fiction has all been reprinted in Jirel of Joiry three times in paperback and Northwest Smith by Ace Books in 1983. Space these stories out as they get 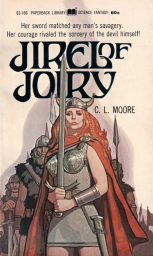 H. Warner Munn’s “Werewolf of Ponkert” and other tales of the werewolf clan have recently been reprinted by Altus Press. Now if we can get Munn’s non-series short fiction reprinted. His novel “King of the World’s Edge” was first an Ace paperback and then part of Merlin’s Godson which had four printings by Del Rey.

Midnight House produced a collection of G. G. Pendarves’ ghost stories in 2005. Print runs were generally around 300 so this might be hard to get.

E. Hoffmann Price had a strange idea that he did not want his old fiction to compete with his new fiction. He also could not understand the resurgence of popularity of H. P. Lovecraft and Robert E. Howard decades after their deaths. Price could write a very good action scene when he wanted to. I tend to like his adventure stories in Argosy over his Weird Tales yarns. David Drake said to me that Lovecraft never wrote anything as good as Price’s “One Step from Hell” (Argosy, August 5, 1939). Never the less, you do see the Arkham House collection Strange Gateways and the Carcosa Press Far Lands, Other Days at Windy City Pulp & Paperback Show and at Pulpfest. Far Lands is wonderfully illustrated. It all comes down to what you want to pay for these. There was a great Zebra paperback from the 1970s waiting to happen with a mix of Price’s fiction.

There were six Seabury Quinn paperbacks from Popular Library (edited by Robert Weinberg) in the middle 1970s. Five were collections, one was a novel (The Devil’s Bride). You do see these from time to time in used bookstores. All the Jules de Grandin you will ever need.

Theodore Sturgeon has eight stories in Weird Tales despite him being associated with John W. Campbell/Astounding/Unknown. Most were reprinted in E Pluribus Unicorn 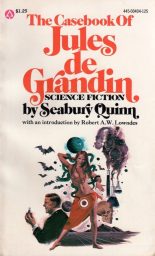 and Visions and Venturers.

Donald Wandrei is another of my favorites. Lovecraft preached the cosmic but kept it in New England. Wandrei took it into the future and out there. There are no paperbacks of his fiction but the second edition of Colossus is still in print.

Manly Wade Wellman was a mainstay of Weird Tales in the 1940s. His John Thunstone series was similar to Jules de Grandin but much better written. There was a Night Shade Books series (The Selected Stories of Manly Wade Wellman) about 15 years ago. Four of them are Weird Tales reprints. There is a beautiful Haffner Press edition of the John Thunstone series from 2012 but alas that is out of print.

Henry S. Whitehead is a writer held in great esteem. He was one of the first to use voodoo as a basis of his stories. There were two Arkham House collections and a British paperback from Mayflower (The Black Beast) from 1976. Luckily, almost all of Whitehead’s weird fiction has been collected in the Wordsworth Voodoo Tales. You can order this on Amazon. Like many of the authors here, space the stories out to one a week. 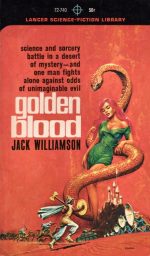 Jack Williamson had one of the greatest novels in Weird Tales– “Golden Blood.” This is one of my favorite lost race novels. The influence of A. Merritt is present, remember A. Merritt was the most popular fantasy writer probably from 1925 to 1950. Lancer Books reprinted the novel twice. There is also a Tamurlane Press hardback. Williamson’s other fiction from Weird Tales has all been reprinted in the Haffner Press collected Jack Williamson series. Spider Island (Volume Four) is still in print and has three stories from Weird Tales.

There you have it. If you want to explore beyond H. P. Lovecraft, Robert E. Howard, and Clark Ashton Smith, you have a guide. Some thoughts– historically Robert Bloch, Ray Bradbury, and August Derleth actually seem to be the most reprinted authors within the more general horror anthologies. All had high profiles in the 1960s.

August Derleth’s Arkham House was crucial for getting much of this fiction out there. Do you think there would have been a Greye La Spina paperback if there had not been an Arkham House book first? August Derleth really played a huge part in building the legend of Weird Tales.

If you take out the Lovecraft Circle, you don’t have much. Farnsworth Wright was very comfortable with middling pulp writers as Seabury Quinn, Arthur J. Burks, and Otis Adelbert Kline. He was uncomfortable with authors pushing at the frontiers of imagination. He was at odds with Lovecraft almost always, rejected Clark Ashton Smith and Robert E. Howard when he should not have. His capriciousness caused Donald Wandrei and Frank Belknap Long to find greener pastures at Astounding Stories under F. Orlin Tremaine. Without Lovecraft and his huge influence on many of the writers I just listed above, there is no legend of Weird Tales. 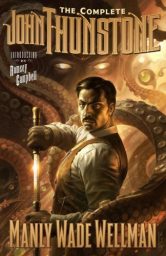