Building the Hero: The Pulp Approach 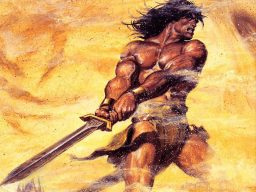 Say what you will about the pulps, but even their most dogged detractor would admit they produced damn memorable heroes.  Tarzan is one of the most influential characters of the 20th century. Conan is still iconic and beloved to this day.  And a slew of others, like The Shadow, Red Sonja, and Doc Savage had eras of tremendous popularity and are still fondly remembered.

Yet, it’s shocking how sparse the description of these protagonists is within their own stories! Forget the Dickensian approach, where half a page is spent on the color of a character’s nose.  Many of these pulp legends get the most brusque and bare-bones of treatments.

Consider the opening to the Howard classic Queen of the Black Coast.  Poor Conan can’t even get a full sentence of description.  We’re merely told, in the middle of an action, that he was sturdy and black-bearded or that he had a dark scarred face that was at that moment hardened with passion.

This isn’t the standard “show, don’t tell” advice, either, as it goes far beyond that into a type of literary minimalism.  Furthermore, there is often no mention of the past accomplishments of a Conan or a Tarzan.  They are initially presented as strangers with no past and only a brief look at their faces.

However, these pulp authors had hit upon a truly effective approach!  For one, short description doesn’t bog down the plot like longer ones often do.  It allows the adventure to take center stage.

But most importantly, it allows each reader to conjure up a unique vision of a Conan or Tarzan in his head. This is where excessive description can be a big negative, too.  Usually, after a certain number of descriptors, a reader has a picture of a hero in his head and anything more actively clashes with that vision.

Think of it as a master painter using the bare minimum of brushstrokes to convey the image he wants.

Thus, my picture of Conan will be different than Jeffro’s.  But each of us has crafted our own idea of what the barbarian warrior looks like from Howard’s words.

Interestingly enough, the later Conan books released by Tor in the 1980s (which were my first literary introduction to the hero) violate this precept.  Not only do they go to great pains to describe Conan physically, but they’re constantly referring to some legendary adventure or triumph of his.  While they could partially get away with this because of how established Conan is, it certainly didn’t make him any cooler. In fact, it often made me want to read those stories instead of the forgettable yarn I was trudging through!

Certainly, there are other approaches to building a memorable hero.  And there were many later writers who perfectly understood and applied the minimalist approach to their own creations.

But one still sees stories, even successful ones, whose authors could have learned from the pulps.

Consider for example the Vampire Hunter D light novels written by Hideyuki Kikuchi.  On the whole, I like them, having read the first ten.  The sixth book, Pilgrimage of the Sacred and the Profane, is the high point of the series and one I would recommend even to those with no interest in Japanese half-vampires.  However, beyond the dreadful English translation and a formulaic repetitiveness, I hated how Kikuchi would describe his hero D.  Every single book would have a page or two of description early on of how beautiful D is, how regal his black horse is, how unearthly his movements are, etc.  This would be briefly repeated several times later on in the novel, to drill the point home.  And of course, there would be a painstaking record of how fast and strong D was in the midst of combat.  As well as allusions to legendary deeds by him in the distant past. 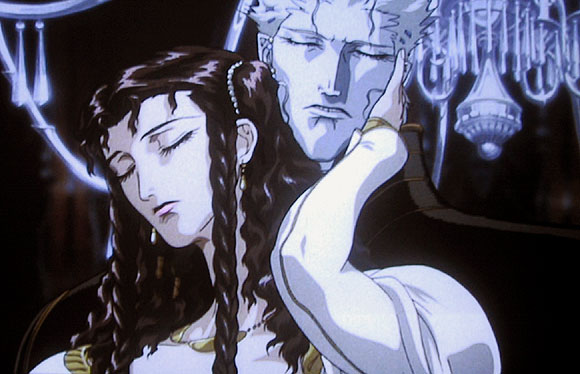 Amusingly enough, the two anime movies based on the series avoid these problems by simply presenting the events of the story without any narrator.  Paradoxically, this makes D seem vastly cooler, more mysterious, and awesome than his description in the books ever did.

Of course, there is yet another trap associated with longer description.  Readers today are a jaded lot.  If a hero comes across as a lame try-hard, especially one they have never heard of, they will simply roll their eyes and try a different work.

This is how I felt after the beginning of the story “Trouble in an Hourglass” (click on the link to read) from the collection Straight Outta Tombstone.  Now, for all I know this might be a great story.  But I got irritated by how hard the author was trying to sell me on Trouble being a gorgeous femme fatale.  It sounded inauthentic, even silly and far-fetched.  So I stopped reading a few paragraphs in.  Unfair?  Certainly.  But that’s what many readers do.

Thus, I would encourage readers and writers alike to consider the approach of the old pulp masters.  The tremendous success of their heroes is partly the result of their minimalist, but highly effective description.