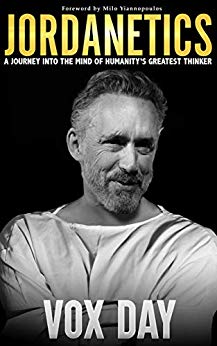 JORDANETICS: A Journey Into the Mind of Humanity’s Greatest Thinker is now available for Kindle and Kindle Unlimited.

Jordan Peterson is believed by many to be the greatest thinker that humanity has ever known. He is Father Figure, Philosopher-King, and Prophet to the millions of young men who are his most fervent fans. He is the central figure of the Intellectual Dark Web, an academic superstar, and an unparalleled media phenomenon who has shattered all conceptions of what it means to be modern celebrity in the Internet Age.

But Jordan Peterson is also a narcissist, a charlatan, and an intellectual con man who doesn’t even bother to learn much about the subjects upon which he lectures. He is a defender of free speech who silences other speakers, a fearless free-thinker who runs away from debate, difficult questions, and controversial issues, a philosopher who rejects the conventional definition of truth, and a learned professor who has failed to read most of the great classics of the Western canon. He is, in short, a shameless and unrepentant fraud.

But is Jordan Peterson more than a mere fraud? Is he something more sinister, more unbalanced, and even more dangerous? In JORDANETICS: A Journey Into the Mind of Humanity’s Greatest Thinker, political philosopher Vox Day delves deeply into the core philosophy that Jordan Peterson advocates in both his written works and his video lectures. In doing so, Day methodically builds a shocking case that will convince even the most skeptical Jordan Peterson supporter to reconsider both the man and his teachings.

For a video preview, watch the Darkstream.