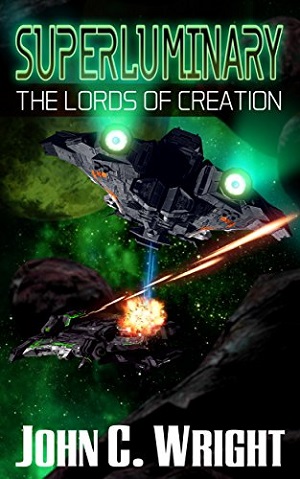 Aeneas Tell of the House of Tell is one of the youngest Lords of Creation. His family rules the Nine Worlds through its control of the ultra-advanced technology that has permitted the colonization of the entire solar System. More gods than men, the Lords of Creation have cheated Death itself.

But even a quasi-immortal god will take exception to being assassinated. Twice. Especially when the assassin turns out to be a someone he thought was a friend.

SUPERLUMINARY is the latest and most outrageous creation of science fiction grandmaster John C. Wright, the Dragon-award winning author of THE UNWITHERING REALM, THE GOLDEN AGE, MOTH & COBWEB, and AWAKE IN THE NIGHT LAND. THE LORDS OF CREATION is the first book in the series.

“One part action, one part intrigue, and one part cosmic horror, this story captures the attention and holds it from the first pages to the last. I once read a description of over-the-top action as: “It’s not enough that the hero must expertly pilot his aircraft in a desperate escape from pursuing fighters. No, he must do so while conducting a fistfight with the enemy agent who has slipped on board and assaulted him. And then something in the cargo compartment bursts into flame.” This story is like that, only with super-science, family politics, and Eldritch Things from Beyond the Stars.”–Amazon Reader Review