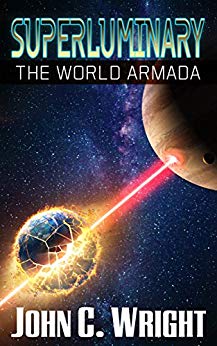 Castalia House is extremely pleased to announce that SUPERLUMINARY: THE WORLD ARMADA by John C. Wright is now available for Kindle and Kindle Unlimited.

Although the Lords of Creation survived the awesome onslaught of the world-killing space vampires, there is nowhere in the lifeless galaxy that they can hope to hide their planets and people forever. How can they hope to destroy what is already dead?

The vampiric necroforms are a massive empire of anti-life, terrible beyond all imagining, ruling a vast network of dead stars and planets they have drained of all life. Aeneas, the Emperor of Man, realizes that if the human race is going to survive, he is going to have to find a way to re-seed the entire galaxy with life while burning down the interstellar undead empire with the precious light it cannot bear. And not only does Aeneas have to do the impossible, he is going to have to do it while keeping a wary eye out for the ruthless betrayer at his back.

SUPERLUMINARY is the latest and most brilliant creation of science fiction grandmaster John C. Wright, the Dragon-award winning author of THE UNWITHERING REALM, THE GOLDEN AGE, MOTH & COBWEB, and AWAKE IN THE NIGHT LAND. THE WORLD ARMADA is the third and final book in the trilogy.

“Rather like Awake in the Night Land, you cannot appreciate the full brilliance of Superluminary until you have read the whole thing and see how John C. Wright manages to pull the whole thing together on multiple levels. In my opinion, with Superluminary, John C. Wright firmly establishes himself as the greatest science fiction writer of his generation and one of the all-time greats. It’s the combination of brilliance, originality, and consistency that serves to elevate him beyond the likes of Neal Stephenson and China Mieville, both of whom are indubitably great SF writers, but unlike Mr. Wright, they simply do not manage to scale the literary heights again and again with such magnificent reliability.

“I initially thought Superluminary was over-the-top fun, John C. Wright amusing himself by seeing if he could go the notorious Worldkiller one better. Then, when I reached the part about why faster-than-light travel is a very bad idea and why there has been such a mysterious lack of alien contact with the solar system, I realized that it was something deeper and darker than that. But not until finishing THE WORLD ARMADA did I grasp just how uniquely astounding is the work as a whole. And it is not a coincidence that every single one of the 41 reviews for the first two books in the series rate them both 5 stars.”—Vox Day, Castalia House Editor

From the earlier reviews: