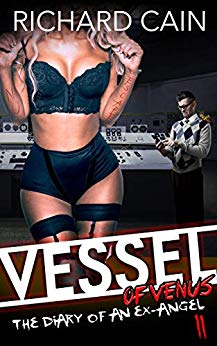 Castalia House is pleased to announce Richard Cain’s latest book, VESSEL OF VENUS, the second in the Diary of an Ex-Angel series.

Mark is a down-and-out IT professional with a secret. When he discovers a sorcery app that gives him incredible powers, he sets out to win his ex-girlfriend’s love and start a new life – until Venusians show up, sharing the story of how their civilization was destroyed by global warming and giving Mark the chance to fight climate change. All he has to do is offers them a sacrifice once in a while.

Will he get the girl? Will everyone finally realize that he’s the most amazing person ever? And will that damn talking locust ever shut up and leave him alone?

You’ll find out in the hilarious VESSEL OF VENUS: The Diary of an Ex-Angel.

From the reviews of GOD HATES ME, the first in the Diary of an Ex-Angel series.