Choose Your Enemies and The Rising of the Shield Hero 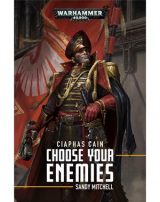 Commissar Ciaphas Cain, Hero of the Imperium, returns in Choose Your Enemies, his eleventh adventure for Warhammer 40,000’s Black Library imprint. While on a posting to a remote mining planet, Ciaphas Cain and the 597th Valhallan Regiment unearth a hedonistic Chaos cult. But rooting out the corruption soon takes them to the heavily populated industrial world of Ironfound–and in the direct path of an Eldar raiding fleet. Will elven space pirates, Chaos demons, and crazed cultists finally prove to be too much for Cain?

It’s been five years since the last Ciaphas Cain adventure, and, while more Cain is always welcome, the Hero of the Imperium is missing that Flashman scoundrel aspect of his nature that adds depth to his more noblebright adventures in the grim dark future of Warhammer 40,000. What’s left is a standard military mystery, enlivened by the narrator’s footnotes, if not her antics on stage. It’s Cain lite, which is still better than most military-flavored SF, just not at Black Library’s prices. Hopefully further adventures will take Cain into the upheaval of the new setting in Warhammer 40,000. 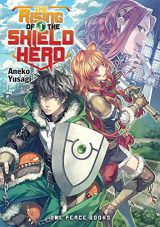 In the first volume of The Rising of the Shield Hero light novel, Naofumi Iwatani discovers a mysterious tome in a library that, when read, takes him to another world. As the Shield Hero, he must join forces with other legendary heroes to defend this new world. However, he is soon slandered and betrayed by a princess of the realm. Forced into penury, Naofumi must rely on his own wits to grow stronger, for the only way home is by saving the ungrateful world he is trapped in. Even if it takes some unsavory measures.

Let’s face it, contemporary light novels have not fared well in Castalia House reviews. For every title reviewed, two others don’t make the cut. And at first glance, Shield Hero appears destined to join those rejected titles. After all, isekai revenge fantasies usually follow the same script into psychopathic wish fulfillment, especially those based around litRPG mechanics. Naofumi’s journey, however, follows a different path, one critical of the standard isekai hero. He is gifted with a useless weapon before falling victim to court machinations that most heroes merely handwave their way through. To survive, Naofumi resorts to unscrupulous measures–including outright slavery–that proves that he does indeed merit the harsh treatment he deserves from his host nation. Consistently forced into disadvantageous positions, Naofumi must figure out how to solve problems and win fights without the blessings that his fellow heroes have learned to enjoy. And when Naofumi eventually wins the day when his more gamer-minded fellow heroes cannot, it only earns him suspicion and jealousy instead of praise. Shield Hero follows Naofumi into some dark places without devolving into venom, diatribe, or secret king preening, creating something unique for isekai, an anti-hero that is not a loser out for revenge.