Chuck Dixon’s Avalon #3: The Conscience of the King 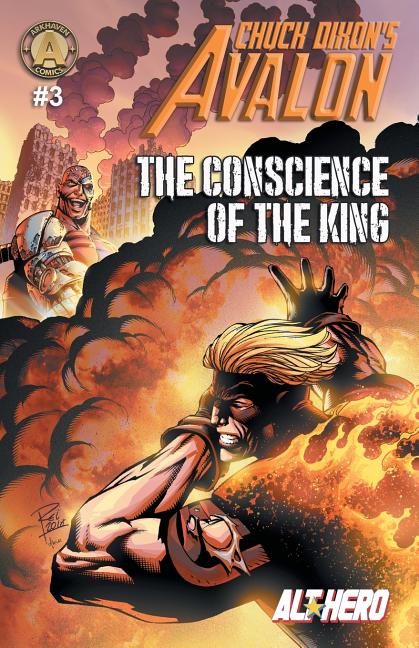 We are very pleased to announce that CHUCK DIXON’S AVALON #3: The Conscience of the King is now available in a standard-size gold logo print edition. Due to the higher cost of the standard size, the comic will now retail for $3.99, but we will continue to sell them for $2.99 on the Castalia Direct store nevertheless.

For collectors, please note that we will be producing a limited run of gold logo standard-size versions of issues #1 and #2 later this year. And, of course, we will be sending free corrected editions to the 209 people who unfortunately received the “silent” edition of issue #2.

While King Ace is in training with Big Simba and the Specials of the UN-SPC, his former partner-in-fighting-crime Fazer languishes in a prison designed especially for people with superhuman powers. Fazer is desperate to escape, but how can he get out when his jailers possess the technology required to block his unique abilities?

But Fazer isn’t the only one feeling trapped, as King Ace quickly comes to learn that his new team isn’t tasked with fighting crime in the city of Avalon, but rather, tracking down other people like him and Fazer. And he also discovers that signing on with the official forces of law and order means accepting restrictions on your ability to do what you think is right.

Oh, and one more thing. Alt-Hero backers should check their email tomorrow morning….