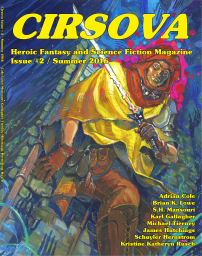 The Sealed City, by Adrian Cole – Adrian Cole revisits the setting of his classic Dream Lords cycle for the first time since the 1970s!  Witchfinder Arrul Voruum makes a journey to a recovering Earth to root out a nest of evil from a bygone era.

Hoskins’ War, by Brian K. Lowe – Cirsova veteran Brian K. Lowe tells the story of a Continental Army captain who, while harrying the British rear column, finds a nightmarish pre-human subterranean city where a shapeshifter has spirited away a young woman.

Squire Errant, by Karl Gallagher – Planetary Award winner Karl Gallagher shifts from hard sci-fi to fantasy. A young squire must step up to the challenge and teach a village to defend against and hunt down the monster that terrorizes the countryside and killed his master.

Shark Fighter, by Michael Tierney – The stakes are high during a supernatural life and death struggle between a dive photographer and one of the most powerful killers of deep. 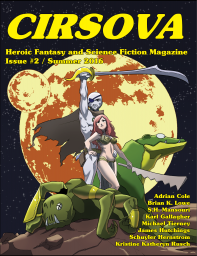 Images of the Goddess, by Schuyler Hernstrom – This novella has wizards, monks, nomads, space ships, haunted jungles, talking apes, insect-men, zombies and more!  You won’t want to miss this wild ride in the sci-fi tradition of Jack Vance.

Pre-order your copy of issue 2 today!

Short Reviews will return next week with Captain Midas by Alfred Coppel, Jr.!