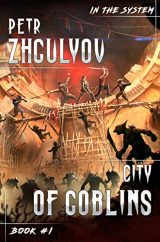 Along with 1,000 others from Earth, Ivan Susanin is transported to the System, to fight in a clash of alien pantheons that will determine the fate of each world. Those who refused the “honor” are dead, and those who die will be replaced. Those who fail to fight well will be stranded in the City of Goblins, forced to fend for themselves while the heroes return home to rest, rearm, and get dragged into the next skirmish. For once the System has ahold of you, the only way out is death.

Petr Zhgulov’s City of Goblins combines the brutality of Goblin Slayer with the divine gladiatorial games of Small Unit Tactics. The brutality is matter-of-fact, not reveled in, as the System is an uncaring and unforgiving referee between the races doomed to fight on its battlegrounds. About half the people chosen cannot handle it, and are abandoned to death and fates even worse. But for those who can thrive, there’s opportunity to lead, even as the Earthly pantheon fights among itself. Ivan quickly rises to the top, but most of the endless waves of players are just cannon fodder that may help or harm his chances of a return trip home. City of Goblins is another in a long series of talented solo adventurers exploiting a restrictive ruleset in a futile and unending clash between unseen powers. But it also has an unflinching and almost jaded glimpse into humanity that Western LitRPGs, with their preference for eternal hope, avoid. 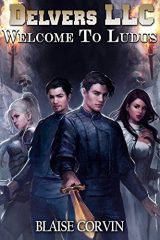 Henry and Jason were two regular guys and friends before getting dragged to another world at the whims of a capricious cosmic deity. Now they are stuck on Ludus, the playground of the god, where a mishmash of different kinds of humans live in a magically restricted low technology setting, and monsters roam the wilds. The pair of friends must now use their god-given powers to unite the planet, before the god grows tired of them and someone stronger claims the bounties on their heads.

Blaise Corvin’s Delvers LLC: Welcome to Ludus starts as standard isekai portal fantasy, complete with new worlds, new powers, and, as the cover art hints at, the potential for harem hijinks. And while the general isekai form remains, that of heroes using their home’s knowledge to their advantage and creating an out-of-context problem for their new world, Delvers LLC puts a new spin on the genre. Friendship makes a difference, as the heroes are co-equal and partners, instead of rivals, as most male friends in isekai and light novels are treated as. Henry and Jason actually build a team around themselves instead of collecting pawns and admirers. While the standard power fantasy elements persist, they cling to the team as a whole, with Henry and Jason finding that their individual choices are more limited than those of contemporary isekai and litRPG heroes. While they might be in the drivers’ seats for their new inventions, they often are not in the tangled, growing web of relationships and alliances building around them. 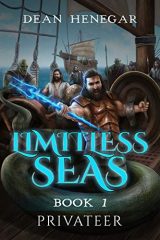 After a half-remember accident, retired Navy captain Craig Larson finds himself reborn into a strange new gameworld set on the fantasy high seas. He awakens chained to an oar in a pirate’s ship, but desires his own freedom. During a clash with a warship, Larson whips up the rowers into a rebellion and seizes the ship from the pirates. Now a captain once again, Larson sets out to make his path on the Limitless Seas. But why can’t he remember who he was, and only just the skills from his past life?

Dean Henegar’s Limitless Seas: Privateer shifts progression fantasy from the theme-park fantasy games of World of Warcraft to a just-as-idealized version of piracy. In many ways, Limitless Seas rolls back the conventions of litRPG to the 90s. Larson is immersed into his new world as totally as any portal fantasy hero experiencing his new surroundings. Gaming mechanics are moved behind a veil, so the action is immediate and realistic, without the rattle of dice or the activation of skills from menus. There is a hint of a real-word mystery, as the external events surrounding the fate of Larson’s physical body are revealed. But Limitless Seas: Privateer is built around the novelty of its setting, and that novelty isn’t enough to carry a standard progression fantasy story with stock characters, albeit a well-executed one, through to its final revelations.