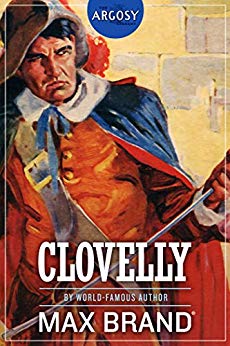 Most familiar as his pen name Max Brand, the poet and incredibly successful pulp writer Frederick Schiller Faust is best known for his Westerns and creating the character of Dr. Kildare. However, Faust also wrote for Argosy, filling its pages with tales of 1600s’ fencers, swashbucklers, and swordsmen. In Clovelly, he brings knowledge of the sword and of adventure to post-Civil War England.

Clovelly is a fencing master, having studied under more than a few masters and in more than a few national styles. One sees the same disdain for bullshido in Clovelly as in many MMA fighters. In Clovelly’s own words:

“I have heard these grave professors make a mystery out of fencing; but I have learned to laugh at them.” And “…as for tricks, I hold them not worthy…”

Clovelly as a character exemplifies a strange point to the violence in pulp fiction. As sensationalistic as the pulps are held to be, there is a remarkable reluctance to killing as there is a glee for fisticuffs. In a speech, Clovelly savages the man who doesn’t have a sure sword hand, for such a man who cannot deftly use his point to madden, distract, and incapacitate his opponent must be forced to fight to kill, as he has no other options.

Brand might start Clovelly’s adventure with an erudite description of stonework, but he quickly sends Clovelly into a duel with a bully. Clovelly wins, not through a flashy display of skill, but a simple trick. He flicks his swordpoint into the bully’s sword wrist. Sure, it’s skill, but it’s a move every slightly experienced fencer does to beginners–and it’s annoying as hell until you learn to deal with it. Not quite a master stroke, but also not something to stop the story to explain.

Rather, it’s the thirty seconds of David easily parrying Goliath’s blows that earns Clovelly the attention from his new benefactor Lord Teynham. He is to steal a locket from a rival, one that bears the picture of Cecily, an especially lovely and virtuous lady dear to Lord Teynham. Clovelly agrees as “an empty belly is an eloquent advocate to advise desperate deeds.”

Clovelly exploits a tradition among Cavalier bodyguards to hit the rival’s coach unguarded, and teaches manners to the nobility. Wits, not force, are the key to his victory. Although the gains are as dust. The locket is of an apparently faithless girl, and when Teynham wishes to further spoil Cecily’s reputation for a thousand pounds’ profit, Clovelly returns his fee for the deed and soon finds himself hounded by his employer.

At this point, the reader is only a mere 20% into the novel, and there’s been duels, crimes, betrayals, and a little bit of philosophy. Brand has already proven himself to be in the highest tiers of pulp adventure writers, and there’s still 190 pages of twists to go.

Instead of hiding, Clovelly further entangles himself into the web of deceit among the nobility surrounding Cecily’s now tarnished reputation. Unfortunately, the lady herself has been meeting with rakes and rogues in secret, so Clovelly’s involvement is more in outrage of “that a lady was to be damned in order that Teynham might have a thousand pounds in his pocket.”

40% in, and the second 20% is notable for the lack of Clovelly. The barons scheme, for Cecily has fallen in with cads and ranters. Their solution to preserve her virtue: Wed her to Clovelly. Clovelly agrees. Not for Cecily’s sake–her reputation and therefore her worth in his eyes are ruined–but because his price will be a privateer’s ship to plunder the same Spanish that tortured and killed his father. But before that, he must first kill or run off his rival–who Clovelly ends up saving in the midst of a duel instead.

At the 60% point, every time Clovelly appears to indulge in a bit of counterscheming of his own, he’s revealed to be true to his purpose. In this case, after a bit of a con and another duel, he’s to escort his rival to Cecily, where the pious man will explain how much plunder he earns from privateering.

20%, 40%, 60%. These are not accidental reference points. Clovelly is a novel designed for serials, akin to quarters of a Dent Master Plot, with a piece of the overall story that can stand independent of the rest, yet fits in a cohesive whole. In comparison, today’s serials tend not to hold up as individual chapters. They do tend to make decent reads—only after all the parts of that particular literary Triforce are collected.

After his rival disgraces himself before Cecily, Clovelly marries her, an act of no joy for him because she is ruined. Both acts enrages her father. As the newlyweds flee from brigands and armsmen, Clovelly is starting to come to terms that Cecily might actually be of sterling repute. The assassins and swordfights eventually lead Clovelly to the man who casted aspersions about his wife. The result: the clearing of Cecily’s name and warming of the marital bond (and bed) was certain from the start.

The end might have been certain, but the journey was breath-taking and full of twists, turns, and switchbacks. Brand both executes the standard tale of a besmirched woman well and does more in the pages allotted to him. It’s amazing how much Brand squeezes in to a mere handful of chapters without causing whiplash. And the pacing is a marvel, too. Brand’s not racing from event to event, but mixes relaxed dialogue scenes with tense action and twists. As for the prose, it is closer to Hammett than Gibson, with plenty of period vocabulary to learn. And as far as the history and culture go, it’s sink or swim. As in many of the adventures of the time, the reader is expected to be familiar with the era.

Readers should reach for more of Brand’s tales. Writers should analyze the structure and storytelling. Brand reels out revelations about his characters slowly, but never in a way that plays up surprise or contradicts the previous actions and motives.